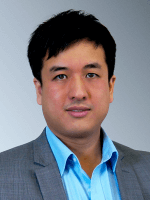 Presenter: Katherine Lodge
Guest: Arthur Lee
Guest Bio: Arthur Lee graduated as a physiotherapist from the University of Melbourne in 2000. His recent experience has been in private practice, specialist centres, director of health companies, previously he also had experience at football clubs, hospitals, and aged care facilities

Segment Overview:
Arthur talks about lung disease and how rapidly it is growing in Australia.

Katherine Lodge: Thank you for listening to Health Professional Radio. I’m Katherine and our guest today Arthur Lee is a cardiorespiratory physiotherapist, treating chronic lung diseases, working mainly with respiratory and sleep positions across the Eastern South of Melbourne. And he’s one of the few physiotherapists in Melbourne who has a special interest in this area. 2014 is showing up to be a busy year for Arthur being awarded a national grant for developing the area of Cardiorespiratory Physiotherapy. Arthur is also successfully nominated into the Australian Physiotherapy Association as a committee member and for May this year most likely he’ll be involved in a search program run by Melbourne University in the area of Cardiorespiratory Physiotherapy. Wow, that’s a mouthful! Welcome to our show Arthur.

K: Now to start off with, let’s talk about lung disease and according to the Lung Foundation of Australia, Lung disease is significantly growing as a health issue for Australians and it’s estimated that more than 7 million Australians aged 35 years old maybe at risk of lung disease. Can you tell us more about why is it going so rapidly in Australia?

A: Oh Katherine I guess for me, I’m not in an academic in this area and I really don’t know what the statistic as to why but there’s been a lot of working really look at the risk factors, the things like smoking increases the risk of COPD – we can look at a lot of those things. But in terms of why it’s increasing, I don’t know maybe someone else does but to what I’m seeing, my role as a cardiorespiratory physiotherapist in working in the community is that with the growing population and I’m seeing more people with lung disease that actually have no options out in the community. They go see the hospital system that goes through pulmonary rehabilitation the one that come out, there’s nothing else. So I guess that’s where I see more of the problem is that lack of services in this area physiotherapy.

K: Right. And I do want to get into what you do with the community but before we go on, would you be explain to us what COPD actually is?

A: Okay well, COPD stands for “Chronic Obstructive Pulmonary Disease” and it’s really an umbrella term for a set of lung diseases namely Emphysema and Chronic Bronchitis. And what we can see with these different types of diseases is some people may present with a lots of sputum or phlegm seemly see a someone just hacking away or they’re just trying to get their phlegm out. And a lot of people also have, when their lungs are damaged in this way, actually it’s restricted a bit. The area of obstructive they get more air in their lungs, they can’t get it out and because of that they find it hard to breath and get very breathless as well – so that’s breathlessness and phlegm are the main issues in COPD.

A: Well it seems like when people can’t remove their phlegm effectively, they get other complications, shifting sections and other nasty bugs or people have exacerbations where they just can’t breathe. So they need things like oxygen, they need antibiotics, other interventions that would actually require them to be at the hospital to be monitored. So that’s part where people go home there’s not much support ongoing therapy or management and they get hospitalized.

K: And what you specialized in is you work with once the patients have been discharged from the hospital system, is that correct?

K: Right and I understand that lung cancers and a lot of the lung diseases are one of the least funded in the world and what you’re doing is you’re giving support to, as I understand it, people who have been discharged and you help them from being housebound and getting active back into the community. Can you tell us about some of the programs that you run?

A: Well one of the main things I do at the moment is I do consultations in private suites. So people come in, they might get referred from their specialists or their doctors and they’re short of breath, they find it hard to get phlegm out and because they’re short of breath and lack of activity – this cycle, they can become anxious, they can do less, they get weaker and they’re at that point where they’re even afraid to go let’s say to a shopping center that may have slopes. Because they know if they go to slope they find it hard to breathe and they rather avoid that thing, than think of the slopes. So what I do is I try to turn that around with offering education, teach them how to remove their phlegm effectively and teaching them exercise programs that will help them continue to build up their muscle endurance as it fits them and also a big part of it is coaching and making sure that they actually do these things to reach these goals. I guess it’s one thing to be an expert in giving all the exercises and all the advice but there’s another thing that people actually carry out and I see that as my major role in there. That’s one of the things and what I’m working on this year is I’m working with one of the hospitals if they have a pulmonary rehabilitation program to develop not only to develop but to run a maintenance work that’s very low cost for people who’ve come out of the system, so that they can enter a maintenance system where they’re with other people who have similar anxieties, who have similar types as well. It’s not as support group but through that exercise group, it may even become a support group as well so that’s what I’m working on in 2014.

K: Right, yeah. Very interesting and can you see a future for physiotherapists in this of stream of physiotherapy?

A: I see a huge future in this because I’ve been looking at to some single statistics and COPD is I think the most common disease that hospital admission they can be presented. So there’s a huge area for this and so it does depend on whether Physios what to do it or not. A lot of Physios actually do what I do but in the hospital system, Cardiorespiratory Physio are in ICU but there’s not many in that private sector. I think it will grow. I can’t predict the future.

A: I Like to say I can but I do see it as a growing are specially in more and more Physio’s that are coming out, there’s more Physio in schools popping-up here and there and so sooner or later I think people will take it on.

K: Well thank you so much for your time today and for explaining to us what you do. For those of you that would like to know more you can go to chestphysio.com.au. Thanks again for your time.

A: Thank you Katherine.