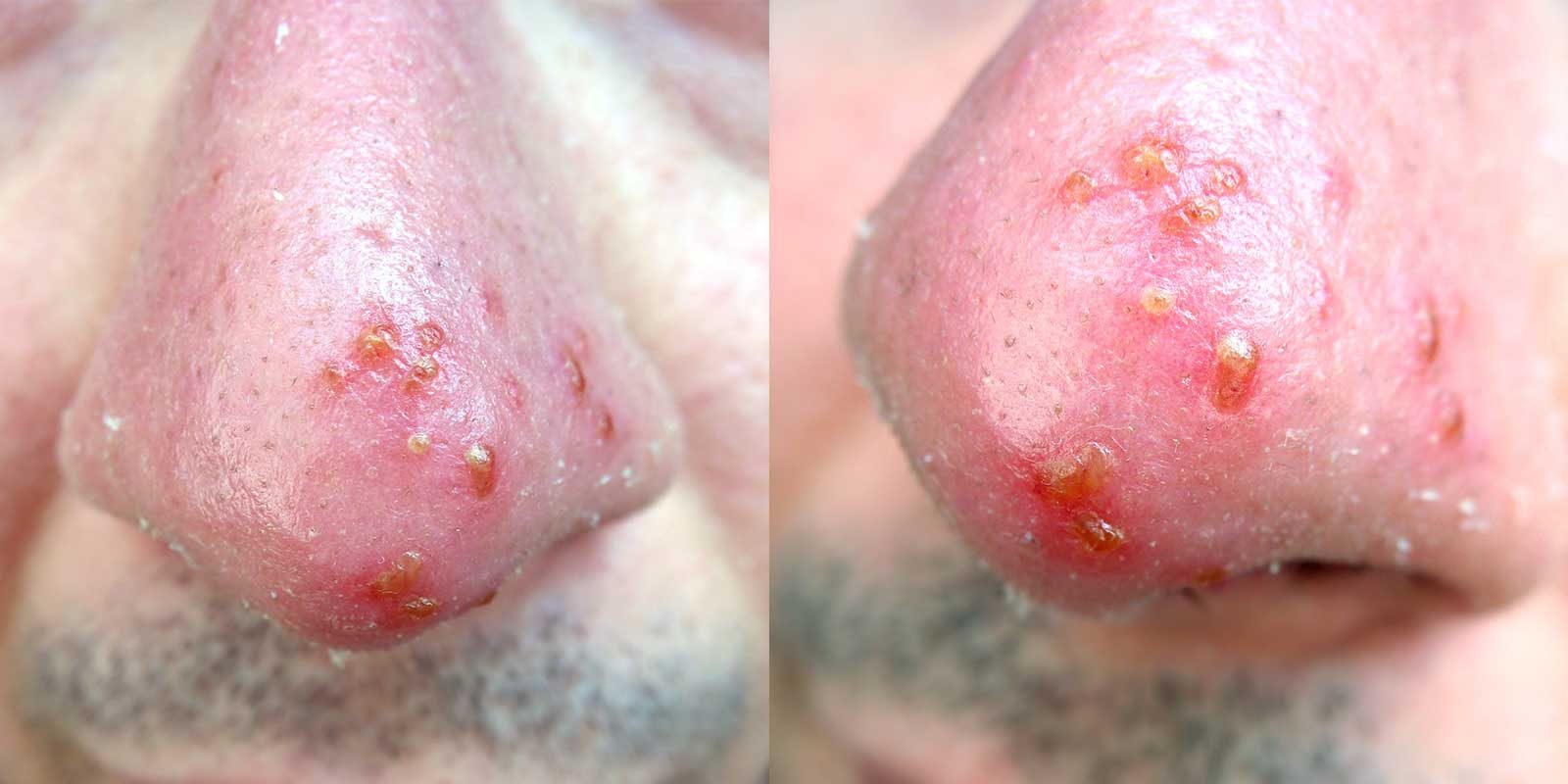 More than 9 Million people in the US suffer 6 or greater Herpes Simplex 1 and 2 (herpes labialis) outbreaks every year with no existing medications indicated for the prevention of additional occurrences.

In this interview, Dr. Hugh McTavish, Company Founder, President, and CEO of Squarex, LLC, a  clinical-stage pharmaceutical company, talks about the company developing a topical formulation for the prevention of recurrent cold sores (herpes labialis) and other infections caused by Herpes Simplex Virus 1 or Virus 2.

Company Founder, President and CEO Dr. Hugh McTavish, suffered from frequent cold sores and developed this product to treat himself. Squarex is a clinical stage pharmaceutical company developing a topical formulation of the immunomodulator squaric acid dibutyl ester for the prevention of recurrent cold sores (herpes labialis) and other infections caused by Herpes Simplex Virus 1 or Herpes Simplex Virus 2. The compound is in early pre-clinical studies for the prevention of genital herpes. Unlike current treatments for cold sores, this compound is not applied to the face or lips. Rather, it’s on the arm or another part of the body.

Professional Radio, thank you for joining us. Our guest today is Dr. Hugh McTavish. He’s a company founder, president and CEO of Squarex LLC. Squarex LLC is a clinical stage pharmaceutical company and he’s joining us here on the program to talk about his company developing a topical formulation for the prevention of recurrent cold sores and some other infections that are caused by Herpes Simplex 1 and Simplex virus 2. Welcome to the program Dr. McTavish.

Dr. Hugh McTavish: Thank you for having me Neal.

Neal: A bit of your background, you are the founder of Squarex. What did you do and what are you still doing as president and CEO of the company?

Dr. McTavish: Yeah, well I’m the founder. I actually am also a patent attorney and a biochemist and I invented the drug actually out of my own experience of having frequent cold sores in my desperation to find something to prevent or treat them and hit upon this idea, treated myself initially and seem to work so started I company rounded it and filed a patent application for it and we’ve moved forward.

Neal: That’s the I guess the abbreviated version. Certainly there are some compounds that you came across. You say you had recurring cold sores. What is the difference between cold sores and other types of herpes – the virus 1, the virus 2 – how do they differ?

Dr McTavish: Well cold sores cold, technically called  Herpes Labialis or Oral Herpes, and those are outbreaks on usually on the border of the lip, sometimes on the border of the nostrils or other places on the face or the lip. They’re usually on the border between the skin and the lip and so those break out, they last typically about two weeks or so, forms a red spot that often opens up and then crossed over later and that typically is caused by herpes simplex virus 1, sometimes by herpes simplex virus 2 (hsv-2). Genital herpes is similar but with the outbreaks are on the genitals and that is typically caused by hsv-2 but sometimes by hsv-1. So the genital outbreaks, general herpes is contracted by sex, oral herpes is typically contracted by oral contact and actually I understand most commonly people get it as infants of the large majority of the population is infected with hsv-1. And typically people get it as infants I’m told by being kissed by their parents.

Neal: Well this drug that we’re here to talk about today, is this your lead drug? What’s it called and is it for the prevention, the treatment or a little bit of both?

Dr McTavish: It’s for the prevention. The compound is called squaric acid dibutyl ester, it acts much like poison ivy actually. It causes an immune response on the rash, that’s what poison ivy is, it basically tricks your immune system to thinking your skin is a foreign object and your  immune system, t-cells in particular attacks the skin. And squaric acid dibutyl ester acts by a similar mechanism, we think anyway and so it can cause a rash in some people. In most people in our clinical trial, it does not cause a rash but in some cases that causes a rash. The rash is called a delayed type of hypersensitivity response because it does not typically happen immediately after application of the drug. It’s delayed because it’s an immune response, it takes your immune system some time to come up with the response for it so it peaks after the  application of the drug.

Neal: Now when you say developing a rash, are we talking about where the compound is applied on the lip or the nose or somewhere else on the face?

Dr McTavish: Yeah, the rash would be where the compound is applied but the great thing about this … which was actually a surprise to us, I’d initially treated myself by applying it to my lip when I was having an outbreak but in our clinical trial, we dosed people on the arm to sensitize them to the compound so next time they got exposed to the compound, they would develop a stronger… We dozed them once on the arm and then the plan was we would dose them when they had an outbreak, provided that outbreak was at least two weeks after the dosing and this was a placebo controlled trial so some people that got … and some people got the vehicle with the drug dissolved in it. And lo and behold, most people who got the drug didn’t have another outbreak and most people who got the vehicle did have another outbreak after just the dose on the arm. So we learned that we didn’t have to dose on the face which is of course of the advantage because if he’s going to get a rash you’d much rather have it on your arm than on your lip of your face. So anyway that was a story of how we discovered, we didn’t know that we could just dose on the arm.

Neal: You mentioned that the large majority of population is infected as infants, so that’s a huge market for the compound. What are some other potential treatments for the drug?

Dr McTavish: Yeah, this is a huge market so the majority of the population is infected with hsv-1 the figures I’ve seen is 15 percent of the population had at least one outbreak and a little over 2% had six or more outbreaks over the past twelve months. So yeah, there’s a big market. We’ve done another clinical trial that the compound as you can understand, it induces a supply … it works with other pathogens, at least other viruses, because it’s an inhibitor of just one  application specifically or something. So we’ve actually done another clinical trial where we dosed people with frequent outbreaks once with the drug and then we collected their blood before dosing and two weeks and eight weeks after dosing and tested that for in vitro in the lab for great immune functions in particular, immune response to hsv-1 virus. And people, we also tested people, we didn’t dose them, we collected blood from people who have zero or one outbreak who are infected with the virus. So we compared the traits of people with good immune control and anatomy in control of hsv-1 and the people with good immune control, basically their immune cells … they had a bigger mune response to the virus in vitro than people with frequent outbreaks and bad immune control. So we tested their blood two weeks and eight weeks after dosing and compared it to how it was when we bought we’d collected from the same people at me before dosing and two week later there was really no difference but eight weeks later, they were substantially better, significantly better immune response to the virus. And also interestingly, they had a bigger immune response to a yeast extract that nearly everybody has been exposed to that too so it’s kind of it used as a test for general general immune function. So we think it will work for hsv-2 and genital herpes as well as hsv-1 and probably a number of other viral diseases. I’m not so sure about colds and flu but viruses that have taken up residence and endemically infected you like hsv-1 and hsv-2 do, it should be beneficial I think for those as well.

Neal: Quickly, when do you expect or anticipate FDA approval?

Dr McTavish:  I think we’re going to start our pivotal clinical trials in 2019 and so I would hope we could get FDA approval in 2021.

Neal: Best of luck and it sounds extremely promising. I don’t see any problem on my end but hey, I’m just the host on this radio show. Well thanks for coming in and I’m hoping to talk to you again, okay?