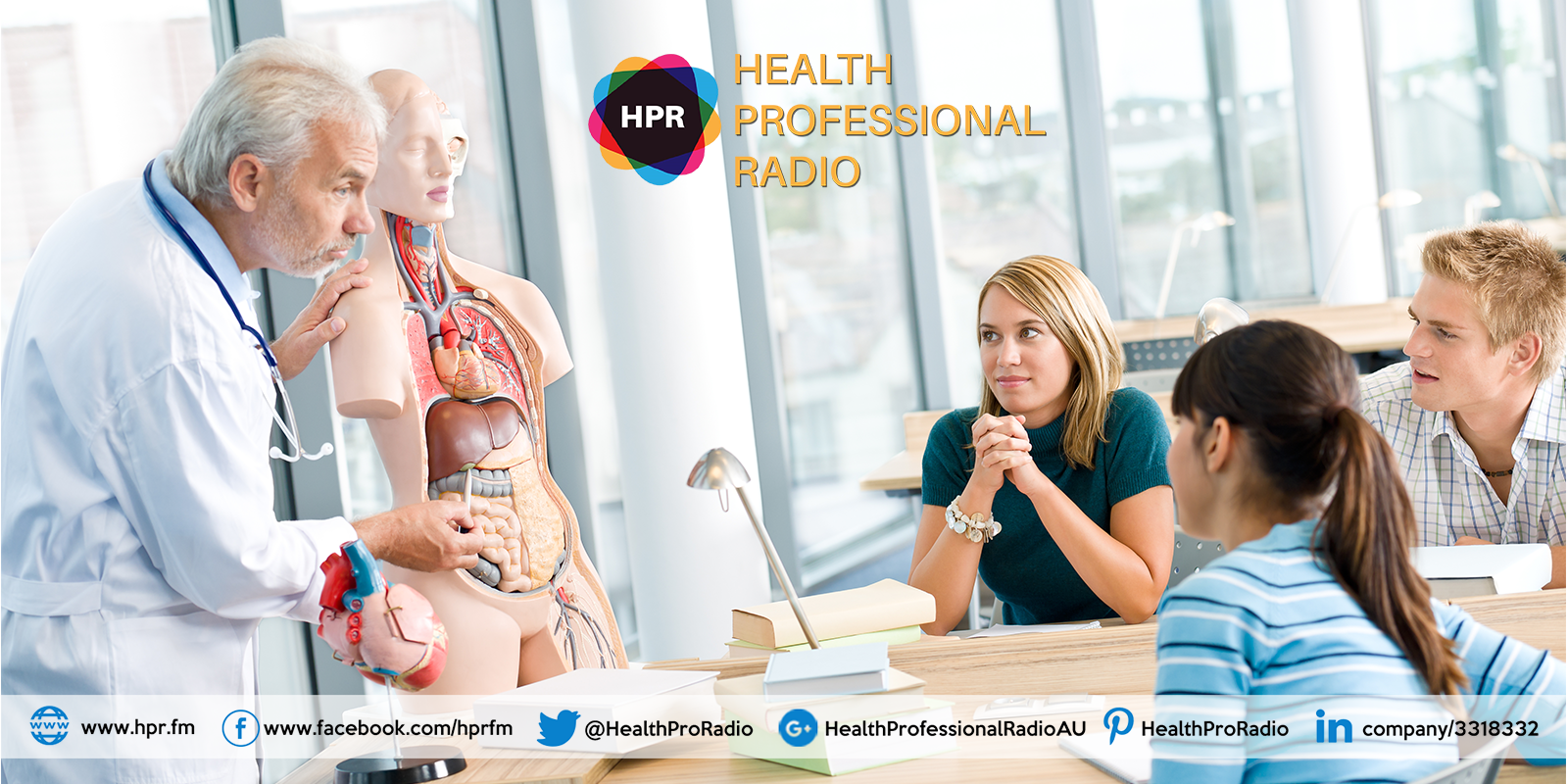 Third year medical student Dayna Duncan from the Albury Campus of the University of New South Wales joins Health Professional Radio to talk about the Australian Medical Students Association (which she is a member of) and to promote the organization’s  Rural Health Summit.

Dayna Duncan is a third year medical student currently studying at the University of New South Wales Albury Campus. She is originally from a small town on the Eyre Peninsula, South Australia, and has long been passionate about rural areas and communities. Through participating in and running community programs and volunteer work, Dayna was named the South Australian Young Citizen of the Year in 2013 and in 2014 was named in The Advertiser’s 50 most influential women in South Australia.

In 2018, Dayna is working with co-convenor Jordan Vivian and a team of medical students around Australia to run the Australian Medical Students Association’s Rural Health Summit in Albury. The summit will bring together 240 medical students from around the country to demonstrate the opportunities afforded by working in rural health and inspire and up-skill future rural healthcare professionals.

Toby Longhurst: Welcome to Health Professional Radio. My name is Toby Longhurst and joining me on the program today is Dayna Duncan. Dayna is a third-year medical student currently studying at the Albury Campus of the University of New South Wales but is originally from the Eyre Peninsula in South Australia. She’s also a leading voice for rural areas and communities. So much so that in 2013, Dayna was named the “South Australian Young Citizen of the Year” and in 2014, “The Advertiser” South Australia’s Major Daily listed her as one of the “50 Most Influential Women in the State.” Dayna, welcome to the program.

T: Now I’m sorry I’ve got to start by asking a question and I’m sure you get asked many, many times. How’s the study going?

D: It’s going all right. I actually, as of an hour ago, I’m on holiday. So it’s going great for the next few weeks and then I might get back into it.

T: I was going to ask that it must be exam time but you’re already on holiday.

T: Well done. So what’s the plan for holidays?

D: So I’m spending a week in Sydney and then heading back to South Australia for a week and then a week here in Albury.

T: You really get around. Where are you at the moment?

D: So at the moment, I’m actually spending the afternoon volunteering with St. John Ambulance and so I’m sitting in the back of an ambulance at the bench. I might have to duck off in case of casualty but it’s a school sports day so I think we’ll be safe.

T: There you go folks, we’re coming straight out of the back of an ambulance. That’s fantastic. Now as I mentioned, you have in the intro, you’ve got a very strong connection to South Australia particularly to the rural communities there, always wanting to get involved. What are some of the issues that you saw needed attention particularly from a youth perspective?

D: So as a young girl growing up in South Australia, two of the big issues that I identified personally in my community were a lack of access to educational opportunities and also a lack of diversity and awareness of diversity. So I got involved with a few projects from that mainly through the ABC’s Heywire Program. And one of the major projects I was involved with through our youth channel 11 was starting a Project Corporation Down the Door Day. And started with an event that was held in my town of only 200 people and we had 350 people attend to celebrate diversity in our rural community.

T: How difficult is it growing up in a community for people who might be perceived as being different? Is there an acceptance of diversity?

D: There are certainly challenges and I think not really a lack of acceptance but a bit of a fear of the unknown because there’s so little diversity often in those communities. It can be a bit unsure when people that are outsiders come in and not sure how to deal with them and how they might be different from one’s self. But we were very surprised at the huge amount of support that we received from our community. As I said 350 people working up to an event in a town of 200. It was just an immense support and an interest and really, genuinely wanting to know how these people that were different acted and what they wanted and what their world views were. So I think as well that there are challenges. There’s also a lot of opportunities to show some support in rural communities.

T: Yes. I think having the opportunity to meet people really breaks down those barriers. The saying that “prejudice is simply ignorance.” – the unknown people don’t know, people from other cultures and until they come into the community, they’re not exposed to them or even people who are already in our community or we have people with different sexual orientations. Do you think that’s changing in rural communities, that perception?

D: I’ve certainly seen a shift in the times from when I started high school to when I left when I turned at age 18. And it’s great that the older generation is so accepting and supportive of these changes and these changes in perception.

T: Fantastic. Now the work that you did, one is some very prestigious accolades, “South Australian Young Citizen of the Year” in 2013, one of the “50 Most Influential Women in South Australia”. What was it like being given those acknowledgments?

D: Of course, I was very proud and very excited and honored to receive those awards but I think more than a comment on me, it was a comment on the opportunities that young people have in rural areas. I certainly would not have been able to do any of the things that I’ve done in the city. It’s just every single person who comes to an event, buys a raffle ticket, writes a letter of support for you, it really is a whole community effort and a whole community to achieve all of these projects.

T: You’re now in Albury, a beautiful area right on the border there with Victoria but it’s a long way from home. What brought you there?

D: So I initially wasn’t entirely sure what I wanted to do when I finished school. So I moved to Adelaide and started studying psychology. And in a psychology anatomy class, I got to help with dissecting some cadavers and I absolutely loved it. And from there, I decided to try to get into medicine.

T: Medicine definitely sounds like the right path for you, not everybody is going to be up for that. Now what’s the end goal? What type of medicine would you like to do? Would you like to specialize or a general practitioner?

D: It’s a bit early at this stage. I think that I know I want to work in a rural area. There are so many opportunities in rural areas. But as to what exactly I do whether I’m a GP, an neurologist, an emergency physician, a pediatrician, everything is interesting at this stage.

T: What is it about rural areas that brought you to them?

D: Well since being in Albury, I’ve seen a bit of a different side to rural communities than I did growing up. Of course, it’s an amazing lifestyle. You don’t have a commute to work, there’s no traffic, it’s fantastic in that sense and supportive. But also there are so many gaps in rural healthcare and as a doctor, you have the opportunity to fill those gaps however you see fit. So you can take a community, identify its problems and then adapt your practice and learn new skills and obscure yourself to fill those areas. So it really is an exciting opportunity for any doctor who wants to go to a rural area.

D: I think there’s a 50/50 split but at this stage in our careers, it’s more about wanting to see and try lots of different things in lots of different areas. So I myself see practicing all around Australia, I’d love to work in every single state if possible. So I think the goal at this moment is just to get as much exposure and experience as possible.

T: Well Med school might put the brakes on extra-curricular activities for most. You’re still very much involved in advocacy and community engagement through the Australian Medical Students Association. What is it that the association does?

D: AMSA is a fantastic organization that represents 17,000 medical students Australia-wide and they have such a diversity in the projects, committees, and events that they run. They do everything from advocacy in Canberra with top-level politicians to running events for rural medical students. It’s a huge organization and they do fantastic things for the medical community.

T: Speaking of rural health through the association, you have a rural health conference coming up in September. Tell us about that, where’s it being held?

D: So I’m a co-convener of the Rural Health Summit along with my peer here in Albury, Jordan Vivian. So it’s going to be held in September. We’re hoping to bring 240 medical students from around the country here to Albury and it’s going to be a fantastic weekend and a great opportunity to showcase what rural health and rural practice have to offer.

T: What are some of the topics and issues that you expect to be covered?

D: So we haven’t totally locked down an academic schedule but the exciting thing about it is that it’s a “choose your own adventure” much like rural health. So there will be over 26 breakout sessions and clinical workshops and planner is every day all day as well as panel discussions and a massive rural rescue challenge to be held in the QEII Square. So it will be an opportunity for students to tailor the conference to their own interests and their passions and really see a diverse mix of rural health from everything from LGBT, trans health, to palliative care, to emergency medicine.

T: And if people would like to get involved with the conference, how can they do that? Be they students or other doctors or people who might be interested in speaking?

D: So students who are excited to come should definitely follow our Facebook page. We’ll be releasing our big promo video hopefully on the 1st of July and registration opening on the 19th. And any doctors or other healthcare professionals that are keen to get involved, mine and Jordan’s email addresses are up on the website. So feel free to send us an email and we’d love to get in touch.

T: What is the website? Can you give us the address?

D: So if you just search “AMSA Rural Health Summit,” it will definitely come up.

T: Okay. Well, we will have the Australian Medical Students Association Health Conference link on our website which you can click through which is hpr.fm. And Dayna, I would love to chat to you all day but we are running out of time. So thank you so much for joining us on the program.

D: Not a problem, thank you.