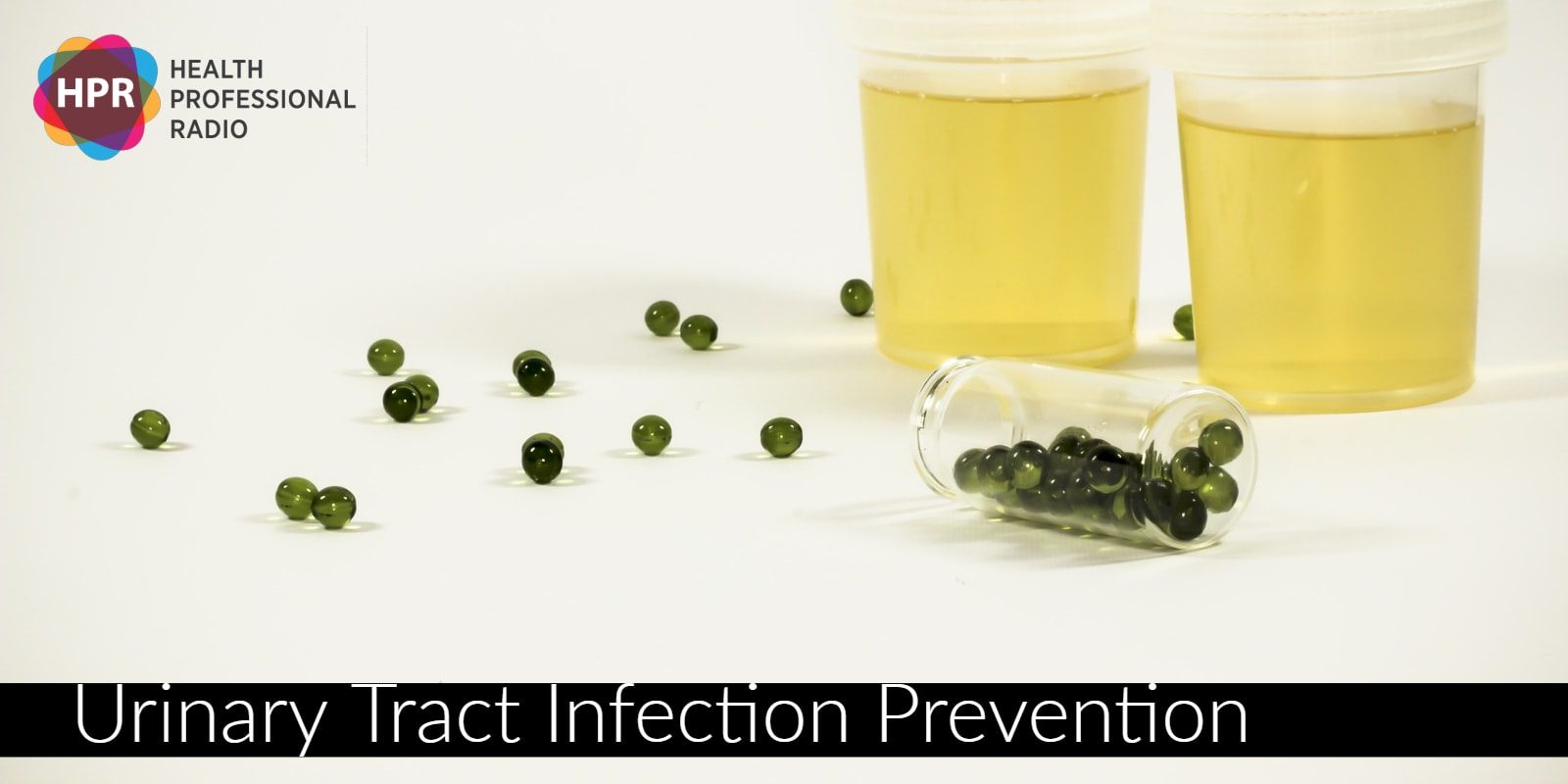 For this HPR health supplier segment, chemist Sara Rose Harcus promotes Dmanna, an incredible daily UTI prevention powder that she created. It’s safe, affordable and convenient. It comes in a single-serving packet that dissolves instantly in any beverage. It’s is a good prevention tool for people experiencing chronic or recurrent UTI symptoms. With Dmanna, you can kill the UTI before it even occurs.

Sara Rose Harcus is a former chemist, current Cryptocurrency trader, and perpetual entrepreneur who eats spreadsheets for breakfast. Her data-driven articles have been cited by publications such as CNN Money, Fortune, and BusinessInsider. She is currently endeavoring to reduce the rate of annual Urinary Tract Infections globally by half, through her company Dmanna, whose goal is to minimize UTI occurrences currently affecting 150 million people each year.

Neal Howard: Hello and welcome to the program. I’m your host Neal Howard here on Health Professional Radio, thank you for joining us here on this Health Supplier Segment. Now from the ‘If you want something done right, you need to do it yourself’ file comes our guest today,  Sara Rose Harcus. She’s a former chemist and she’s joining us on the program to talk about her creation at Dmanna. It’s a daily UTI prevention powder and I’ll let her give us a little bit of background about herself and tell us all about this brand new product. Welcome to the program,  how are you today?

Sara Rose Harcus: I’m good Neal, we’re excited to join you and tell your listeners about Dmanna and what we’re doing with UTI prevention. So as you mentioned, if you can’t find someone to do it for you, do it yourself. That’s exactly what we did with Dmanna this year when we launched the company. I myself have suffered for years with chronic UTIs. I’ve had over 20 UTIs in my lifetime and I was dealing with them right as I was getting out of school with my chemistry degree and getting a lot of misinformation. I mean go on Facebook or on a blog and people are saying ‘Drink baking soda, rub coconut oil on yourself, drink apple cider vinegar.’ All these home remedies, yes, that people are so desperate to try because that’s all they have when it comes to preventing UTIs. There’s a lot of snake oil supplements just recently I’m sure that you saw Neal the debate about whether cranberry juice is actually effective for UTI, a lot of publications came out and said it’s not. We need to stop telling people this it can actually make you UTI worse because it’s so full of sugar but telling patients to drink cranberry juice was something I was even told and something that’s been widely circulated is just another example of the pervasiveness around UTI prevention that women are fed and so there’s kind of this lost and helpless feeling when you’re dealing with chronic UTIs. And so what I did because being a chemist, my first action and trying to solve this problem for myself was to go to PubMed and just read all the literature on urinary tract infection and what I found was that there is something that doctors in science have found that can help prevent UTIs and this was significant for me to prevent UTIs better than antibiotics because at this point I had, yeah?

Neal: Let’s put it into perspective for our listeners. Now you’re suffering as you said, you were suffering for years with these chronic recurring UTIs or urinary tract infections. Now you said you had more than 20 of them, are we talking, are UTIs a general term for a family of nonspecific types of infections or are we talking something specific that was plaguing you as it’s plaguing 150 million right now?

Sara: Yes. So the most common UTI we’re talking about it in women and in general, UTIs affects women and adult and older women who are going through menopause, they affect children, they affect people with catheters and they affect the elderly men and women past age 60. Men and women get about the same rate and most of these UTIs are uncomplicated, they are caused by e.coli. Over 80% of them are caused by e.coli and it typically when a woman is dealing with recurrent UTIs, it’s the same e.coli infection continuing to recur. So the bacteria will be in there and sometimes it will turn into infection and sometimes it’s not and they’ve done studies on women where they found that some 15 percent of women just always have this asymptomatic bacteria in their urethra even if they don’t show symptoms so there appears to be something going on with these infections where the bacteria is always there and sometimes it turns into an infection but it typically is the same e.coli bacteria continuing to reinfect you. So there are small cases of complicated UTIs of different bacteria but most of them are caused by e.coli which is a blessing and a curse because there’s something that scientists have studies that’s been shown to inhibit e.coli bacteria when it’s causing a urinary tract infection. It’s called  D-Mannose and the way antibiotics work, if they kill off the bacteria but they also kill off a lot of your good bacteria and your good bacteria that helps prevent UTIs from recurring and so they found as well is that when women take antibiotics, they’re more susceptible to UTIs down the road possibly because we’re destroying all that all good flora along with the bad UTI causing bacteria so the phenomenal thing about D-Mannose is it acts on e.coli specifically to inhibit it from sticking to the walls of your urinary tract without causing any other major disruptions with any of your other bacterial flora so it’s a non antibiotic solution for women dealing with recurring UTIs that allows us to have as far as the discussion around antibiotic stewardship, I mean this is huge because when women with UTIs like in my case I was getting 6, 7, 8, 9 UTIs out of a year taking antibiotics 6, 7, 8, 9 times a year. That is a significant impact on your health and so being able to offer something to people who are taking antibiotics over and over again and say here and are now becoming resistant to them and say here’s a natural supplement that you can try in order to prevent your UTIs that won’t cause you to get in this sick like cycle of taking antibiotics, cure the infection and then the infection occurs and it’s just this merry go round of antibiotics. So we’re trying to bring that solution to light through this company and help more women and health professionals and providers get educated on how they can help their patients treat them as well without just trying another round of antibiotics.

Neal: So what has your company done, you’ve taken this D-Mannose and you’ve formulated it into something very convenient, I do understand, for anyone who’s wanting to deal with a UTI and just basically nip it in the bud.

Sara: Yes, exactly. So when we started the company just this year, the main goal was to, women and even doctors are trying to wade through this giant pile of misinformation and trying to figure out how to help their patients treat these chronic UTIs that keep coming back. It’s a frustration for doctors, for anyone who’s ever had to treat a woman with UTI, she keeps going back to you with the same UTI. You have to give her another antibiotic which I know they hate doing but right now that’s been the only solution so we thought to just bring the solution to light where we started with it’s just the science. Alright, everything that has been said about cranberry tablets, everything that’s been said about apple cider vinegar – we reviewed it all and we found that there was one thing that has really been proven to significantly reduce your rate of UTI recurrence that prevent UTI better than antibiotics. So we looked at apple cider vinegar, we looked at baking soda, we looked at the acidity of your urine, we looked at cranberry tablets, we looked at everything there was and the science that’s been, all the studies that have been done around every possible solution and none of them has had a significant impact. Some studies showed that vitamin C helps a little bit but nothing had a significant impact the way that D-Mannose was shown to so they did studies where they just three years ago where they gave women daily D-Mannose and in the clinical trial and they daily macro bit and they studied two groups of women and women who are taking D-Mannose everyday, women who were taking macro bit every single day and what they found was the women who took D-Mannose every single day went an average of 200 days without getting a UTI. The women who took macro bit every day went an average of 50 days without getting UTI so four times less UTI is in the group of women who are taking D-Mannose which has no side effects compared to antibiotics which have significant side effects as you know. So when we studied the science, we found this giant solution that we just needed to get out there and we needed to start equipping doctors to tell their patients about it, inform them about it. We found the easiest way to do that was to package it in a daily packets so that women can easily take it because the biggest problem with any treatment plan, whether you’re prescribing physical therapy or prescribing antibiotics is patient adherence to the treatment plan. So we needed to make D-Mannose really easy to take so that there would be no way that a woman would miss it, it couldn’t be inconvenient so we put it in  little packets so you can take it every single day. And that’s the goal of the company, we want to keep doing more studies, finding more solutions that can help women solve this problem, that can help doctors help their patients solve this problem without continuing having to load them up to it with antibiotics.

Neal: D-Mannose, that has been packaged in this daily I guess a powder form that you can mix in with your beverages on a daily basis, where can we go online and learn more?

Sara: Yes. So please go to www.dmanna.com if you’re interested in becoming one of our providers, meeting that you can provide Dmanna to your patients go to dmanna.com/provider and we’ll do on-site trainings with you, we’ll send you all the educational resources and help educate your practice on how to provide a solution other than antibiotics that your patients could try that’s based on science and that has a really high success rate. And if you don’t want to do that, please just email me at sararose@dmanna.com. I would love to talk to anyone who wants to know about how to help women prevent their UTIs using this product

Neal: Great.  www.dmanna.com.Sara, it’s been a pleasure talking with you. I’m hoping you’ll come back and give us some updates as things progress with your company.

Sara: Yes, thank you so much Neal. It’s our pleasure.