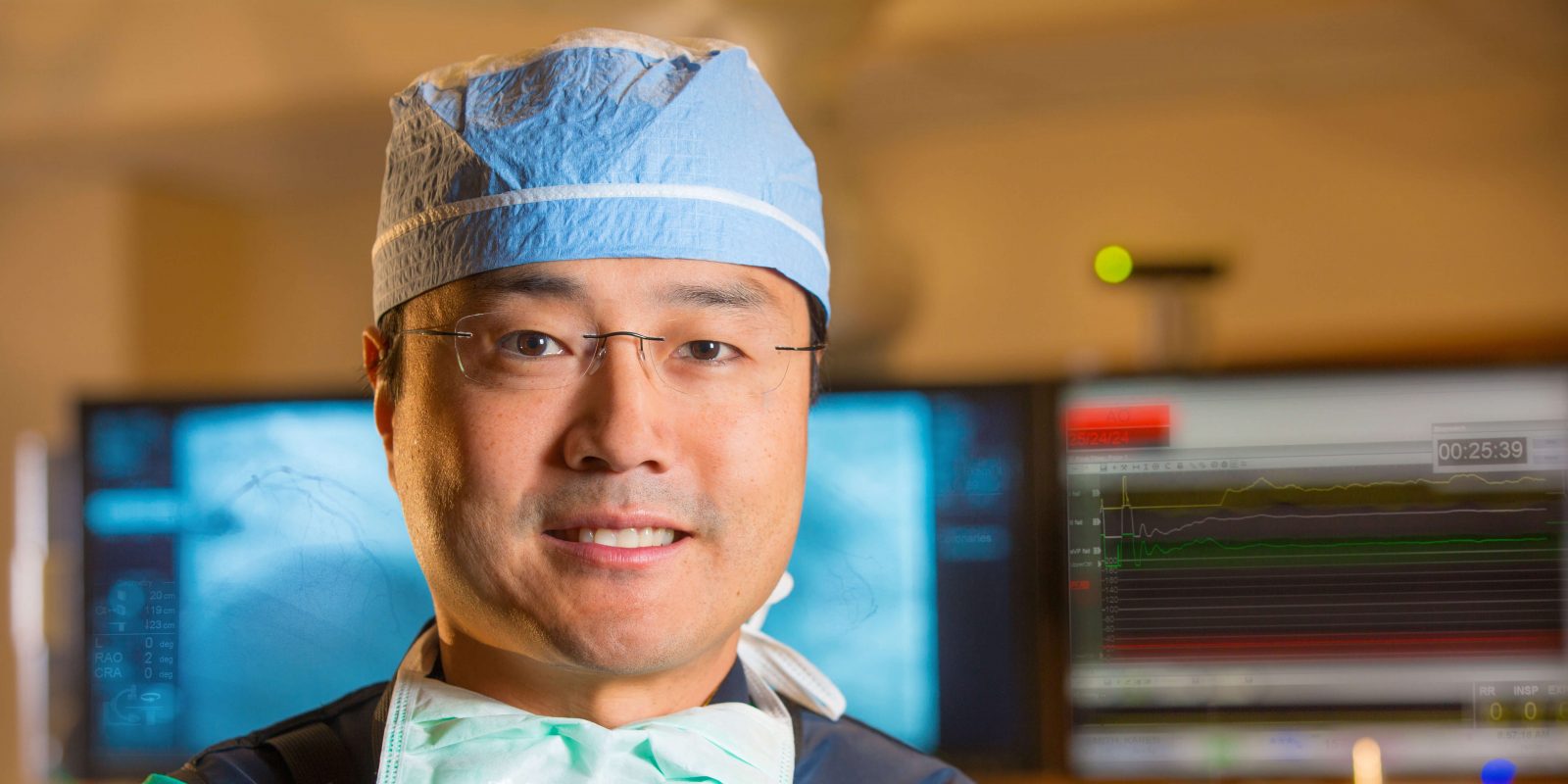 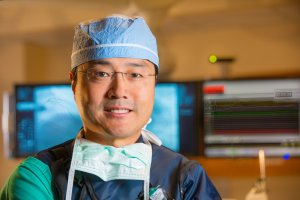 Dr. John Wang: Thank you Neal for inviting me.

N: Thank you. You’re Chief of Cardiac Catheterization, I’m sure you are with MedStar for your entire career, tell us a bit about yourself.

W: Thanks Neal. I actually grow up in Baltimore, Maryland where I liked to school and then went to college at University of Chicago and medical school at the Pritzker School of Medicine in Chicago as well. And then my wife in Chicago and she’s from Boston, so we both did our training at the Brigham and Women’s Hospital in Harvard. And 7 years later, after dealing my internship residency fellowship in School of Public Health I came out at Baltimore and I’ve been in practice ever since. I’ve been with the MedStar Union Memorial Hospital and been a chief here since 2006, so just over 10 years that I’ve been in this position.

N: Dissolvable cardiac stents, you say there are some advances that we need to talk about. Were stents the norm and how long if they’ve been the norm and why is dissolvable better than non-dissolvable?

W: These are great questions. I think what people have known about stents for a long time and stents are these little mesh metallic tubes that we have actually implanted in people’s coronary arteries or the arteries that feed the heart to prop open blockages that are due to cholesterol narrowing. In the most extreme situation, when the blood vessels are 100% blocked that’s when patients have heart attacks. So, metallic stents have been around since the mid 80’s and we used these to literally prop open these blockages. They’re very, very small and they work very well, but they are permanent and once you implant that stent in a vessel, it stays with you for good, there’s no way to take it out. Now, in the vast majority people Neal, it does not cause problems but in under 1%, people that do have problems with stents it is thought potentially due to the fact that the body does not like to have that foreign material in there and is in a way trying to reject that metallic stent.

N: Now, once that rejection takes place, are we talking catastrophic failure?

W: For the most part no. Typically what happens is people end up having scar tissue formation inside the metallic stent and these metallic stents initially were just that what we called ‘Bare-Metal Stents’ with no drug coating or polymer coating. But as the advances have occurred in 2003, we developed drug coated stents and these drug coated stents have an anti-rejection medicine that coats the inside of it. So, when the body tries to narrow down that metallic stent with scar tissue and grow inside of it, this drug actually prevents that in the vast majority of times. Even with these advances though, there are still a small number of patients that will get re-narrowing or closure of these stents long-term and that could be due to the inflammation from the metal or the polymer that’s used to stabilize the drug on these stents.

N: Are they similar in composition to those that prevent clotting?

W: No. Actually, they are usually anti-rejection medicines that are given in transplant-type patients. The most common one, the most effective one used now is Everolimus. Really what happens is, stents have been as far as since they were developed made up of some sort of metal and it was until recently that in July 5th of this summer, the FDA approved the first completely bioresorbable stent. And this stent is called the ‘Absorb Stent’ and it actually is made up of a high grade plastic or polymer. It’s very flexible, it is the first generation of its device so it’s not as easy to deliver or low profile as the metallic stents but it’s advantage is that once you deliver it to the blood vessel that’s blocked and you expand that stent, this plastic polymer absorbable stent over 2-3 years, the body actually dissolves that stent and by 3 years, you’re left with your own blood vessel without anything permanent in there.

N: So it completely gets absorbed and it doesn’t ever cause any blockage itself in the process? Nothing like that has been through?

W: Correct. So, this stent is actually undergoes what’s called a ‘Hydrolysis Reaction’ and so molecule by molecule it’s replaced under hydrolysis reaction and it left with water and carbon dioxide. So, the advantage of this is that, a question I often get from people that hear about this the first time is that, ‘Don’t you need the stent to be there permanently to prop the blood vessel open?’ and the answer to that is ‘No’. And that typically, over 6-9 months when the body has remodeled the blood vessel after you push the blockage to the outside that is now the shape of the blood vessel. It is not need to have that metallic permanent stent there to prop it open anymore. It just happen to be in the past, there was no way to actually get rid of that metallic stent. Now, with these bio absorbable stent, it gets absorbed or dissolves over 2-3 years after it is implanted and again by 3 years, you’re left with the body’s own blood vessel and restored normal function of being able to constrict and dilate as in normal, but with no confined metal cage left there behind.

N: Can you tell who’s a good candidate for this types of stents or are we talking about totally replacing non-dissolvable?

W: It’s a good question Neal. Just to give you some background. There are almost a million stenting procedures in the coronary arteries done in the United States per year. And the patients, I would say that already have metallic stents, you should not worry. They’re very safe and they’re very effective. But as with all things and all technologies, and especially in the field of medicine and interventional cardiology, they’re always iterating, they’re always looking for the next improvement, and the next best thing, and this is really the first step towards that. Now, this is the first generation device. Like I stated, it’s a little bit bulkier than some of the fine tune metallic stents. Not all candidates or patients are going to be good candidates for this. They’re going to be some blood vessels that are too small to put this stent in. There going to be some blood vessels that are too tortuous, which means the blood vessel takes too many terms and bends for this type of device. This is not going to be for every single person that needs a stent but it’s the first generation of the technology. I suspect within 10 years, they’re going to be many new improvements even upon this one that in the future, this very well could be the way. All coronary stents are used which are one center all dissolvable. It will not be this particular one, but this is the first of that type of stent.

N: Have you been able to identify a transition between the cost effectiveness of the traditional stents as opposed to these brand new advanced stents that dissolved. They are FDA approved but are they currently being covered by insurance providers or is that something that’s in the work?

W: No. These are covered by insurance providers. And they do come at a slight premium to the regular metallic drug-eluting stents, but a very, very minor premium and really negotiable.

N: Now, where can our listeners go and get more information about dissolvable cardiac stents?

W: Well, I think they can Google the MedStar Heart and Vascular Institute or MedStar Union Memorial Hospital and on their webpage they can certainly search out cardiac procedures and stents. In general, if they wanted too, they could look up the absorb stent or bioabsorbable coronary stents as keywords and find out more information.

N: Well, I thank you for talking with us today doctor.

W: Alright. Thank you so much.

N: You’ve been listening to Health Professional Radio, I’m your host Neal Howard with Dr. John Wang, Chief of Cardiac Catheterization for the MedStar Heart and Vascular Institute at MedStar Union Memorial Hospital. Transcripts and audio of this program are available at healthprofessionalradio.com.au and also at hpr.fm, and you can subscribe to this podcast on iTunes.