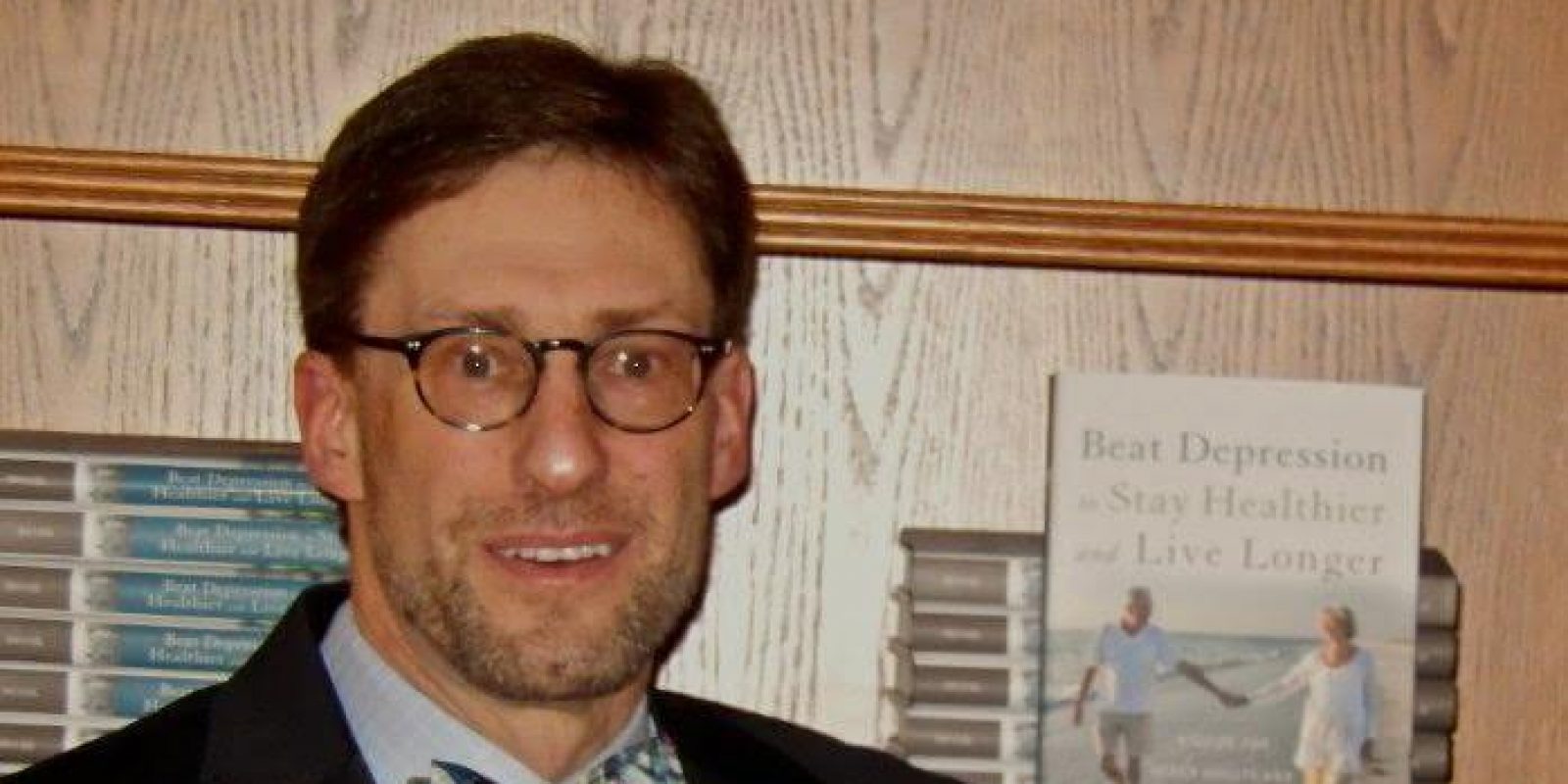 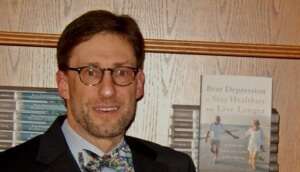 Guest: Dr. Gary Moak
Presenter: Neal Howard
Guest Bio: Gary S. Moak, MD, is a past president of the American Association for Geriatric Psychiatry and 2011 recipient of its clinician-of-the-year award. He is a practicing geriatric psychiatrist with over thirty years experience treating older adults with a wide range of psychiatric and behavioral problems related to diseases of aging. Dr. Moak is assistant professor of psychiatry at the Geisel Medical School at Dartmouth, where he serves as Chief of Geriatric Psychiatry at the New Hampshire Hospital. In addition to his clinical work with older adults and their families, he teaches medical students and doctors in training about mental health and aging and the treatment of late-life mental health problems. Dr. Moak regularly speaks to audiences of older adults and members of their families about mental health and aging.

Segment overview: Dr. Gary Moak, MD, a geriatric psychiatrist, and author of the book, BEAT DEPRESSION TO STAY HEALTHIER AND LIVE LONGER: A Guide For Older Adults And Their Families, talks about the toll untreated depression can take on physical health.

Neal Howard: Hello and welcome to Health Professional Radio. Thank you for joining us today. Older adults suffer depression because the aging process causes changes in the brain’s ability to handle stress and regulate emotions and unfortunately these symptoms are attributed by patients, family members and many times healthcare professionals themselves as Alzheimer’s. Our guest in studio is Dr. Gary Moak, in his new book, Beat Depression to Stay Healthier and Live Longer: A Guide for Older Adults and Their Families, Dr. Moak is a past President of the American Association for Geriatric Psychiatry and that organization’s recipient of the 2011 Clinician of the Year award. He’s a practicing Geriatric Psychiatrist with over 30 years’ experience treating older adults with their wide variety of psychiatric and behavioral problems. He’s in studio with us as a returning guest to talk about his brand new book and also to talk about the toll that untreated depression takes on those older adults and the families as well. Welcome to Health Professional Radio Dr. Moak.

Dr. Gary Moak: Thanks Neal, it’s good to be back with you.

N: We were talking about the older adults suffering from depression. I mean we’re talking retirement years and the onset of depression can lead to, well a retirement that’s miserable as opposed to enjoyable, which is what basically we’re working for.

M: Absolutely. Depression is a serious medical illness that can be quite disabling and it can be sometimes it’s the single greatest threat to mental health and well-being in later life and it can turn what would be a pleasant, well-deserved retirement into years of misery and anguish, unnecessarily and avoidably.

N: We often talk about Alzheimer’s, the onset of Alzheimer’s, maybe Dementia before that. With this geriatric depression being attributed to Alzheimer’s, I guess the healthcare provider is treating Alzheimer’s when he should be treating something that is much more treatable and will allow – with proper treatment – will allow the patient to enjoy their later years.

M: That’s really the shame of it, and that most of the older adults I know, those who I’ve worked with over the years and people I know personally, dread Alzheimer’s above almost all else and would take great steps and go to great pains to avoid it. But they’ll live with depression and without realizing, without dreading it as much and they should dread it as much if not more. The irony is that Alzheimer’s, while we can do things to treat it and help people to deal with it, we have no cure for it. But depression can be effectively treated, effectively putting it into remission and curing it in some cases and the real irony in this is that untreated depression, among the tolls that can take on health, include the possibility of making people at greater risk for developing Alzheimer’s.

N: I talked about the changes in the brain’s ability to handle stress and regulate emotions. Now the brain is a physical organ, are we talking treating depression with drugs 100% of the time, some of the time or is there sometimes no drug therapy involved at all?

M: We treat depression, this clinically significant depression with medications some of the time. The treatment most older adults are likely to receive happens to be medication because most of the time, if they get treatment at all it will be through primary care physicians who may not be equipped to prescribe any kind of treatment other than medication. But we know that for many forms of clinical depression, medication can help but other treatments such as psychotherapies what many people refer to as counselling can be just as effective and a number of lifestyle type treatments including nutritional interventions and supplements and practices such as yoga, tai chi and exercise also can help relieve depressive symptoms and have a role to play in treatment of depression.

N: Normally family members are the first to see a change in behavior, cognitive skills and what not. What are some of the signs that mimic Alzheimer’s that we should have a red flag saying “Hey that looks like Alzheimer’s but let me first take a look and see if maybe there are symptoms related to depression” after some of the information found in your book, Beat Depression to Stay Healthier and Live Longer?

M: So depression is often characterized by a very sad, gloomy mood with periods of anxiety or irritability but older adults may experience depression in which the mood symptoms are not that prominent or even apparent. They may appear withdrawn, apathetic, inactive, disinterested, they may look sluggish physically and even more sluggish mentally, their thinking may appear distracted, forgetful, even frankly confused at times and then may not appear able to function very well, they may appear to not remember on how to do simple things like cook a meal or even take care of themselves properly. And they’ll often sit doing nothing for long periods of time and these can lead casual observers – people that are not experienced in diagnosing the mental health problems that older adults experience – into concluding that they have a disease like Alzheimer’s disease rather than recognizing it for the depression it is.

N: Talk about untreated depression impacting some of the health issues that one may already have going on if some of this makes diagnosis preventing the treatment of more serious health issues.

M: Well so the relationship between depression and physical health is a complicated one involving a two-way street between these two areas and people tend to view depression as an emotional problem and they tend to see it as isolated to emotional well-being. So they recognize that it certainly can be a cause of misery and poor quality of life, they don’t recognize the physical impact that it can take and depression can take a real toll on physical health including shortening lifespan unnecessarily. And it can do that in two ways, it can make illnesses that people already have much worst causing people’s health to decline faster and in many cases it can bring those illnesses on itself. So someone who may not have had heart disease before, may not have had a stroke as a result of untreated depression, may develop a stroke or a heart attack.

N: Now, the field of Geriatric Psychiatry, is this a field that folks are coming out of the school or coming in droves or you wrote this book, obviously to get the word out on a much larger scale than just your base of knowledge and those around you who you initially influenced. Talk about your reasoning for writing the book and are geriatric psychiatrists in high demand?

M: So the reason I wrote the book is that few older adults or members of their families understand the physical toll that depression can take on health and this is information that when older adults have it, or their families have it they become more interested and motivated to have treatment. So I wanted to get the word out for older patients and their families to help them recognize the need for treatment, understand what to look for in terms of recognizing depression and distinguishing it from other problems that might mimic depression and then knowing how to navigate the healthcare system to try to find the help that they need because it does require a fair amount of experience and expertise to provide the correct treatment and unfortunately geriatric psychiatrists and other geriatric mental health professionals or other geriatric professionals in general are not being trained in droves and so what I hear over and over again, are representing a national and in fact global problem is that older adults can’t find healthcare providers with expertise in geriatric psychiatry or geriatric medicine when they need them.

N: Where can our listeners get more information?

M: So the book is available online and they can order it through their preferred online bookseller or they can go to their local bookstore, it may be available there or that bookseller should be happy to order it for them. There are a number of places to get information online and probably the best place to go initially is the website of the American Association for Geriatric Psychiatry which is a national organization of geriatric mental health specialists, psychiatrist, psychologist, social workers, nurse practitioners and the like. And that has a fair amount of information and other resources that may turn help people find the information they’re looking for. My book contains a lot of these information and it’s extensively referenced, so that’s not a bad place to start either.

N: You’ve been listening to Health Professional Radio, I’m your host Neal Howard. Our guest in studio has been Dr. Gary Moak, past President of the American Association for Geriatric Psychiatry and the 2011 recipient of that organization’s Clinician of the Year award. He is currently a practicing Geriatric Psychiatrist treating older adults with a wide range of psychiatric and behavioral problems. He’s been in studio with us this afternoon talking about his latest book, ‘Beat Depression to Stay Healthier and Live Longer: A Guide for Older Adults and Their Families,’ where he talks about the onset of depression late in life which is often assumed by folks to be natural consequence of the aging process, it’s a misunderstanding with potentially tragic consequences. It’s been great having you here with us today Dr. Moak.

M: Thank you. It’s been great to be with you Neal.

N: Thank you. Transcripts and audio of this program are available at healthprofessionalradio.com.au and also at hpr.fm and you can subscribe through this podcast on iTunes.