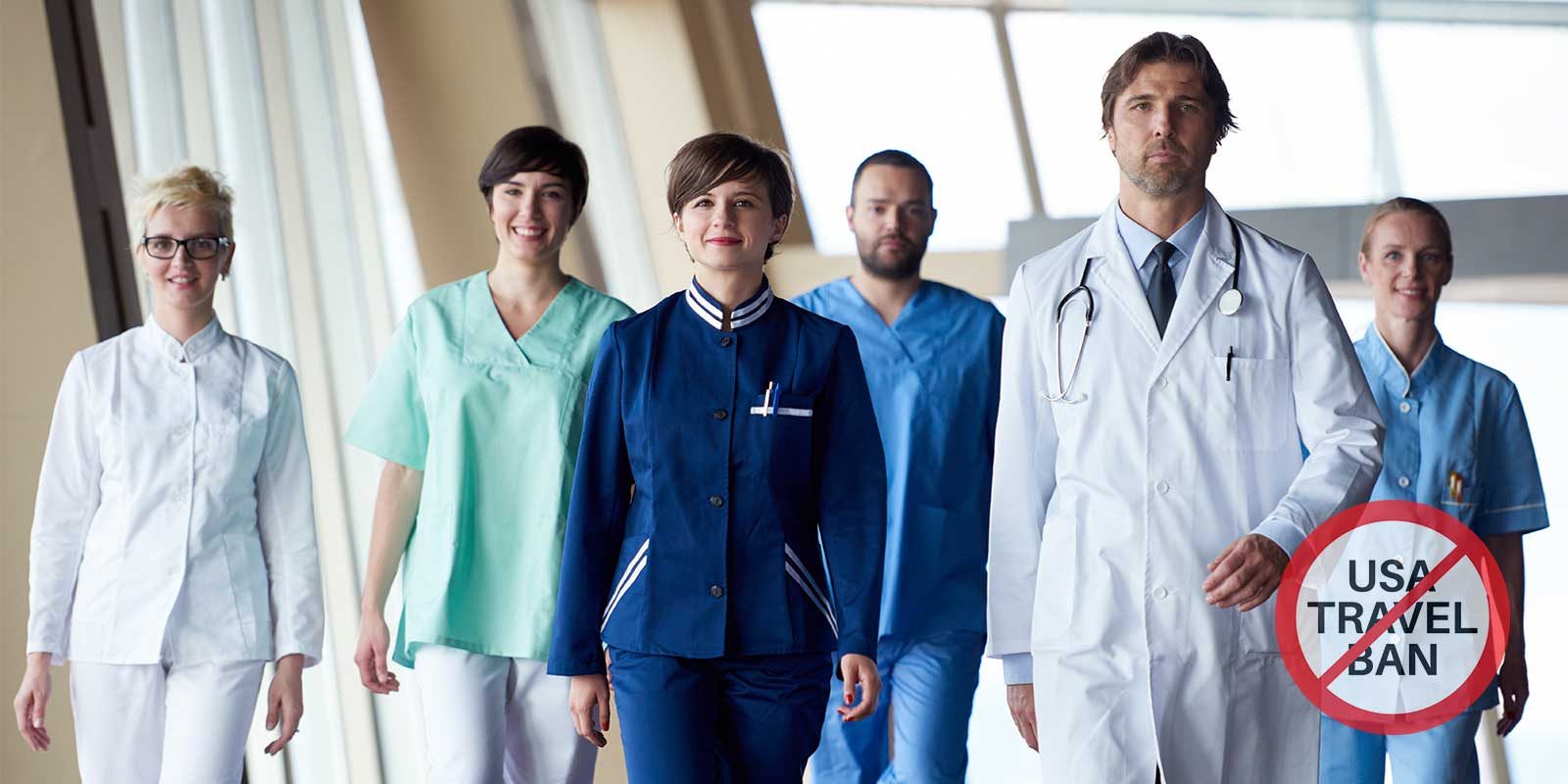 You may remember that the US Supreme Court recently voted to uphold a travel ban in the United States, which may prevent foreign-trained physicians from entering the U.S. to practice. According to the AMA Master File, about 25% of all practicing physicians are individuals who’ve gone to medical school outside of Canada and United States. Dr. William Pinsky discusses how this U.S. travel ban will impact the U.S. healthcare system.

William W. Pinsky is President and CEO of the Educational Commission for Foreign Medical Graduates (ECFMG) and Chair of the Foundation for Advancement of International Medical Education and Research (FAIMER), ECFMG’s nonprofit foundation.

Neal Howard: Hello and welcome to Health Professional Radio. I’m your host Neal Howard, thank you for joining us on the program today. Well you may remember that the US Supreme Court recently voted to uphold a travel ban here in the United States our guest today is Dr. William Pinsky, he’s CEO of the Educational Commission for Foreign Medical Graduates and he’s going to talk with us this morning about how this travel ban may affect our healthcare system here in the United States. Welcome to the program Dr. William Pinsky, how are you?

Dr William Pinsky: I’m fine and thank you for inviting me to be on the program.

Neal: Just a bit of background about yourself, other than being CEO of the ECFMG.

Dr Pinsky: Sure. So by my training, I’m a pediatric cardiologist and I’ve been in academic medicine my entire career in a variety of different roles, ranging from being Associate Dean of Wayne State University School of Medicine in Detroit to being CEO of a 600 bed Hospital and an executive in a three billion dollar large integrated healthcare system. I joined ECFMG just a little over two years ago and enjoying my time within the organization as well as Philadelphia.

Neal: Now the healthcare industry permeates every aspect of our lives as does politics. This U.S. travel band that has recently being upheld by our Supreme Court, how is it potentially going to impact our healthcare system here in the United States?

Dr Pinksy: Well it’s a concern and it’s a very good question to ask. We are a net importer of doctors to the United States. About 25% of all practicing physicians according to the AMA Master File are individuals who’ve gone to medical school outside of Canada and United States and we referred to those individuals as international medical graduates so that that would be approximately 250,000 physicians. And of those international medical graduates, about a quarter of those are US citizens individuals who’ve gone to a medical even though they’re US Citizens, individuals have gone to a medical school in another country, but 75% are individuals who are citizens of another country. So from an access perspective, it’s very important also the international medical graduates who go on to practice in the country tend to be more in underserved areas, both in terms of urban underserved as well as rural underserved. And also, compared to graduates of U.S. medical schools also are more likely to be in primary care so I’m sure you’re aware in terms of what you’ve read and people with whom you’ve spoken, access to care is really an issue in the country particularly in those underserved areas.

Dr Pinsky: Sure. So we’re watching this very carefully and we’re particularly watching countries that typically would have a number, a fairly large number of their graduates come to the United States for training and this would be from the muslim-majority countries. In the travel ban itself in terms of what’s been upheld probably doesn’t affect directly the number coming into the country because even though the Supreme Court has upheld the ban, it really is a small barrier that’s set up. But what’s more important and what we’re watching is it sets a tone for the country and as I travel around and meet with medical students and professors and families of medical students around the world, they’re very concerned that the United States is not a friendly place for their family to come and so we’re watching those numbers carefully. So the travel ban is probably something that is felt by the muslim-majority countries and even some that are not Muslim majority. For example in India, which has traditionally a large number of graduates coming so for example, if we look at act of international medical graduates in the United States right now, of that 250,000 roughly 21 percent of those have come from India as their home country. But we’re seeing a trail in several years of decreasing numbers coming from India so the effect is Muslim majority countries but it’s also other countries as well.

Neal: So Muslim majority countries and other countries as well. It seems that this ban not only disregards I guess intent when it comes to coming into the country, it also disregard I guess religion too if you’re coming from Africa or some of those countries there that are Muslim majority. Isn’t there something set up to let someone know that “Hey I’m a medical student. I’m a doctor. I’m an engineer.”

Dr Pinsky: Right, that’s correct Neal. So this falls into the category that we deal with in a lot of different areas and that category is unintended consequences and because there is nothing specific related to who the people are and why they would be coming into the country. So one is one of the initiatives that I’ve started at ECFMG since I’ve been here is to and frankly it is why I’m glad we’re speaking today is I really want to get the word out that although we are very concerned about security like everybody else, we have to be careful of unintended consequences because access to healthcare is part of security, part of Homeland Security. And if our citizens do not have adequate access to healthcare, that can cause a problem as well. What I want to add Neal is that what we do at ECFMG is we do something called Primary Source Verification and this is what we’ve been doing for the 60 plus years that we’ve been in existence and it’s something that we’re very good at. And what we do is we verify that an individual who is applying to coming to the United States for training because what we do is we certify individuals from other countries to come in and do their residency training. So we verified that they are who they say they are, that their diploma is legitimate and that their medical school is legitimate. We also work with the Treasury Department to assure that any of our applicants are not on any of the lists of what I call bad people. And so when the administration you know was talking about extreme betting that is something that that we already do for those who are applying to come here. We get about approximately 20,000 applications every year for individuals from other countries who are interested in coming here to further their training and it takes on an average of three years for them to clear the process. So that includes our verification of their credentials and it also includes their registering and passing the United States medical licensing exam that we refer to as the USMLE and that’s the same exam that all US graduates have to take as well. And after we have verified who they are and they pass the exams, then they can compete for a residency position, training position in the United States. And generally speaking, there are approximately 12,000 individuals, international graduates who apply for a residency position every year and about half of those are successful. So it’s a difficult process for them, it’s a lot of diligence on our part in terms of verifying their credentials and who they are but the reward is significant for the individuals because frankly this is still, people may complain about our healthcare system at various times but this is the best place of for further training and so it’s quite valuable for people to come here. Once an international medical graduate is successful in obtaining a residency position, then we sponsor them on a j-1 visa. We’re the only organization in the United States that’s authorized by the State Department to sponsor the j-1 visa for physicians and training and we have close to 12,000 individuals on j-1 visas whom we sponsor and oversee while they’re in the country. And the j-1 visa, you may know is a cultural exchange visa so it requires individuals to either leave at the end of their training or be able to convert that into a different kind of visa if they want to stay in in practice in an underserved area.

Neal: While you’re working with the the Treasury Department and all of these other agencies and with these applicants, how is the ECFMG raising awareness for these applicants about the, as you say, unexpected or unintended consequences of practicing Islam and/or just simply coming from the country even if you don’t practice? Because once you’re here and they are vetted and they are under your sponsorship, the reason for the ban still exists whether they’re functioning as what they said they were going to function as or if someone perceives that they’re not.

Dr Pinsky: Yes. So we work with the individuals during the process to be sure that we can acculturate them as well as possible so that if they are successful in obtaining residency positions, they’ll be able to function well. We also work with the program directors at each of the training institutions throughout the year with giving them information about what’s going on with international graduates with the State Department, all of those sort of things. And then we have a very good relationship with the State Department and at the level of the people that do the work and in the consulates, etc. and so they are aware of the issues with individuals who are seeking to come here to further their training and frankly they’re very cooperative in helping us get people through the process.

Neal: Where can our listeners go and learn some more about the Educational Commission for Foreign Medical Graduates?

Dr Pinsky: Yeah, I would invite them to come to our website www.ecfmg.org and I think they’ll be able to get a bit of information there.

Neal: Thank you Dr. Pinsky it’s been a pleasure talking with you this morning and I’m hoping that we can talk again in the future.

Dr Pinsky: Sure. I’d look forward to that, thank you Neal.

Neal: You’ve been listening to Health Professional Radio, I’m your host Neal Howard in conversation with Dr. William Pinsky,  CEO of the Educational Commission for Foreign Medical Graduates. Transcripts of this program are available at hpr.fm and healthprofessionalradio.com.au you can subscribe to this podcast on iTunes, listen in and download at SoundCloud and be sure and visit our Affiliate Page at hpr.fm and healthprofessionalradio.com.au