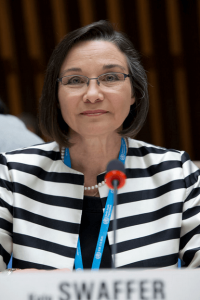 Guest: Kate Swaffer
Presenter: Wayne Bucklar
Guest Bio: Chair and co-founder of Dementia Alliance International, Chair of the Alzheimer’s Australia Dementia Advisory Group, and Board member of Alzheimer’s Disease International. Kate is an Honorary Associate Fellow with the Faculty of Science, Medicine and Health, University of Wollongong; MSc (Dementia Care. She is a Humanitarian, advocate for people with dementia, author and international speaker, and is living beyond a diagnosis of younger onset dementia.

Segment overview: In today’s Health Supplier Segment, learn more about the non-profit group Dementia Alliance International as their Chair and co-founder Kate Swaffer joins us to share more information about their mission and advocacy. They aim to bring the community composed of those with dementia together as one strong voice to urge the government, private sector, and medical professionals to listen to their concerns and take action. Dementia Alliance International was established in 2014 for the purpose of promoting education and awareness about dementia. More insight can be read through the Dementia Language Guidelines as well.

Kate Swaffer: Thanks very much. Thanks for having me.

W: It’s a pleasure. Now I have to confess I have not heard of Dementia Alliance International before we tracked you down for an interview, so tell us what it is that you do.

W: Now Kate the perception that I have of people living with dementia comes from the way it’s portrayed on television and in other media. What is it like in reality?

K: Well in reality many of us live around the world living with dementia, are living good productive lives, we’re living with increasing disability caused by the symptoms of dementia, we’re also being diagnosed with what is a terminal illness. And there about a 130 different types or causes of dementia. Dementia simply being an umbrella term but just like with any other disease, really are we diagnosed at in stage or close to death. Most people are diagnosed in the early to middle stages of the disease, where actually many of the symptoms if we support them like disabilities which is what they are have learned to function in different ways and still contribute really well to society. The media insists on the discourse of tragedy and suffering and we really object to that, because we’re not all suffering. We suffer some of the time, but we’re not all sufferers.

W: And I guess it’s important that there is someone to advocate for that view, and I guess that’s Dementia Alliance International.

K: Yes definitely, we advocate very strongly to that. But a lot of the advocacy organizations around the world there’s been Dementia language guidelines at far back in 2008 which came from Alzheimer’s Ireland. Alzheimer’s Australia had the next of set of language guidelines and other countries have followed out from the Australia, followed up last year with an updated version of language guidelines. But as far as back 2008, these guidelines have been saying “Please don’t call us sufferers.” And yet even the advocacy organizations that published the guidelines often still call us sufferers, so very hard to get money from anywhere if we don’t look like sufferers that’s being the cynical, but that’s the reality.

W: Yes, and inevitably there is never enough money to go around all the things that are required and it’s always a matter of choice of funding bodies in government. But having a united voice is a lot of the things that seems to do well for a lot of organizations. Most of our audience Kate are clinicians of one part or another that 95% of them are doctors, nurses, allied health professionals. In two categories we get a lot in acute care in hospitals and we get a lot in aged care. What the message for them today as a result of having heard you talking with us? What would you like them to take away?

K: Well I think the message for all clinicians and I think advocating this both as an individual and also through Dementia Alliance International is that number 1 I’m advocating nearly half around the world to change our first diagnostic pathway of care. For example when I was 49, diagnosed with dementia, mother of 2, student in university, working fulltime, I was told that the next day I should give up work, give up studying, get my end of life affairs in order, get acquainted with aged care and go home and live for the time I have left. Now if I had a stroke at age 49, a recoverable stroke I would have been rehabilitated back to work if possible. So there is no rehab for me and there is no rehab being offered to people with dementia which when I put my old nurse’s clinician hat on, that’s actually unethical and just to go home and die. And they obviously not really want clinicians to take away from today is the language that they use … is extremely important. And if they keep using the negative demeaning labels when they talk about us or when they write us up in case notes then that’s actually often the way we get treated, so we need positive empowering and enabling language that we find respectful.

W: Now Kate you were diagnosed at what I think is quite an early age, is that uncommon or can you fill us in on how this fits in community?

K: Well in Australia for example there are over 340,000 people diagnosed with dementia. Within that group there’s about 25,800 people with younger onset of dementia which is anyone under the age of 65. So there are people as young as in their 20’s and 30’s who have dementia, they’re often the rarer genetic forms of dementia and I think that the research says that the younger onset dementia tends to be more likely the rare genetic once or the frontotemporal dementia. With there being almost 130 types or causes of which Alzheimer’s disease makes up somewhere between 60 and 80% depending which data you read. But even within Alzheimer’s so just like about the word fruit, and there’s lots of different types of fruits and then even with apples with different types of apples – dementia is exactly like that. So there’s different types of Alzheimer’s even, but it is more rare with people under 65 has dementia but it’s less common than what we would have thought. Ironically I worked in the first dedicated dementia unit in South Australia back in the 70’s as a nurse and I had no idea that younger people got dementia. So when I was being tested, at when I went to my doctor would probably with acquired dyslexia and some minimal issues and some comprehension and word finding issue, in no way shape or form did I imagine it was going to be dementia. But it’s very unexpected for younger people.

K: I think the biggest misconception is probably the way we’re talked about. And the misconception that everybody with dementia is in … So we as people with dementia constantly hear stories, read blogs, read articles, read book, that within the way the longer by this awful negative representations of people who are not there. Actually we’re still here, we are changing, we’re changing in ways that might be different to the way you’re changing, but we’re still all here, we still have a voice. And often even people who are very advanced in the disease, if we could find ways to listen to them, if we take the time to listen to them often looking to communicate with them.

W: Yes. And with a little bit of luck today, we’ll help with that misconception just a little bit. How can people get in touch with you Kate? Is there a website they can go to?

K: There is, so www.infodai.org or for people with dementia www.joindai.org. So people with dementia can join up, it’s free. We run this with support groups all around the world, we’re starting our support group next week with some people with dementia from Nigeria. So we’re in a lot of countries in the world now. And people without dementia who work in the field or who are interested or who has family members can sign up to our weekly blog and newsletter and we run monthly online webinars. So this month we’ve got Professor Steven Sabat presenting on the selfhood and dementia …. professor of psychology from America. Last month we had Mr. Glen Rees who is currently chair of outcome of diseases international, there’s a really good presentation on how the global perspective with dementia for minors. So each month we have presentations that are open to anyone to come and watch, just like attending a seminar, except that it’s just free you can see online. And then we have a huge, huge channels with an enormous amount of date and material in there, with videos and interview of people with dementia about all sorts of different topics. And then very handy … but they’re also really useful for people that are newly diagnosed. So some of the conversations there are, I’ve just been diagnosed, the conversation with my family for example and there are presentations made by people with dementia.

W: You’re listening to Health Professional Radio with Wayne Bucklar and I’ve just been in conversation with Kate Swaffer the co-founder and chair of Dementia Alliance International. And we’ve just been talking about some of the work that Dementia Alliance International does around the world. And of course you can listen to HPR on any of our 30 stations around the world and you’ll be able to hear Kate on there in our archive. So if you’ve just missed our conversation, we have a transcript on our website and we have an audio archive on YouTube and on SoundCloud. And you can also find us on social media channels, our website is www.hpr.fm. Kate thank you for sharing your time with me today, I do appreciate it.

K: Thank you very much.

W And good luck with Dementia Alliance International. I think it’s a great initiative and I hope it grows and flourishes for you.

K: I think maybe the final statistic might be worth just adding in here. There are currently almost 47 Million people with dementia around the world. And the current new global rate is a new person diagnosed with dementia somewhere in the world every 3.2 seconds.

W: This is a problem that we need to pay more attention to, I think.

W: And as we talked about it during our interview, some better processes for first diagnosis. This is Health Professional Radio, my name is Wayne Bucklar. Thank you for being with us today. Do head off to our archive where you can hear the interview with Kate Swaffer.