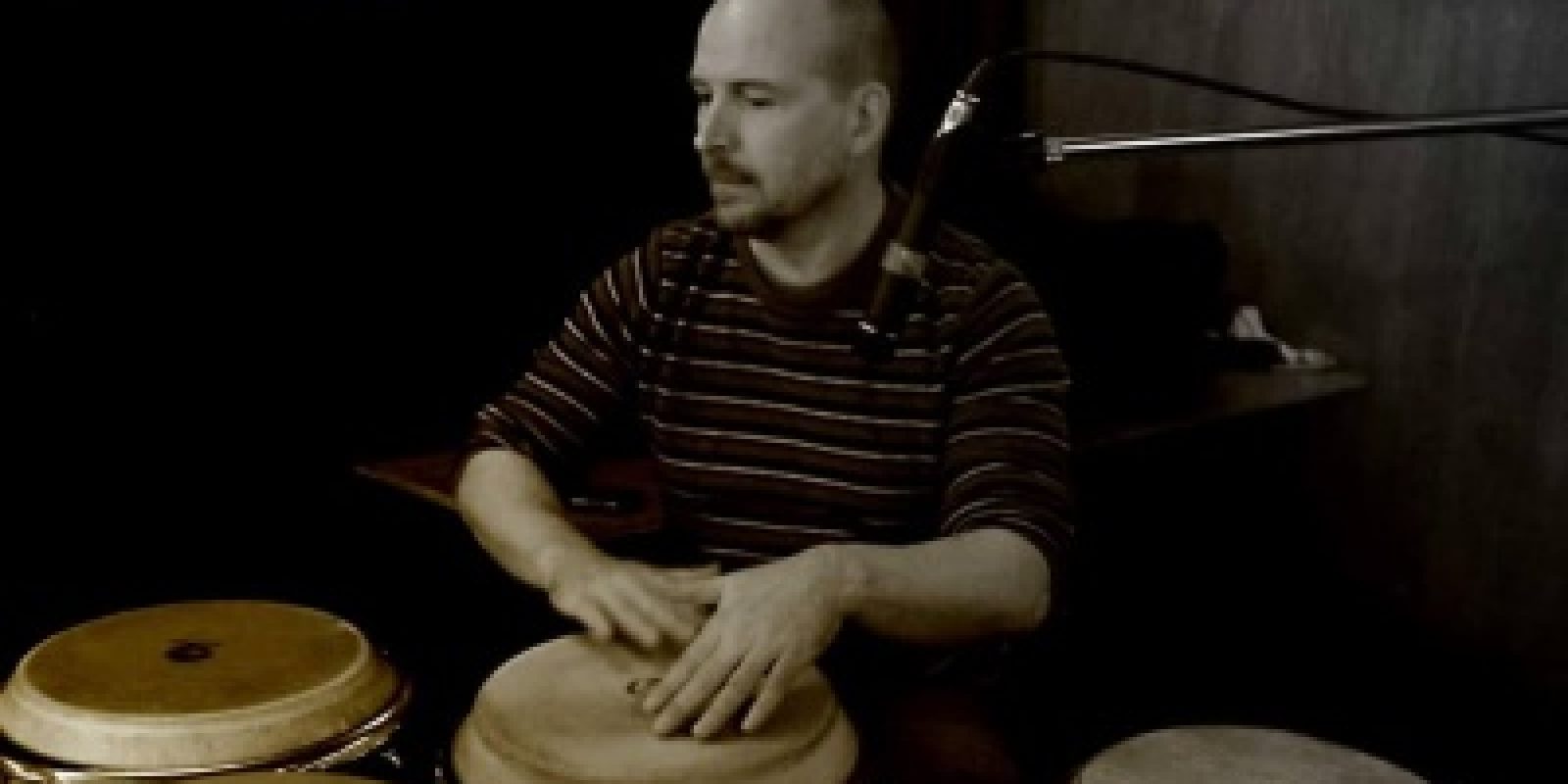 Guest: Robert Harris
Presenter: Wayne Bucklar
Guest Bio: After 15 years of playing drums and a growing interest in the therapeutic effects of drumming and rhythms, Robert Harris created Drum Therapy in 2013 as a resource for the science behind the application of rhythm on the mind and body. Robert’s previous career was a lawyer and financier in the UK, Asia, the Middle East and Australia for more than 20 years. His interest in hand drums led him to study in Sydney, London and Havana with some of the leading percussionists of the Afro-Cuban tradition and in the US with leading drum circle facilitators. As a former bank executive, he Robert believes the dysfunction of most teams and organisations is all too apparent.

Robert Harris: Thank you very much, a pleasure to be here.

W: Now Robert I can kind of hear the exasperated size of lots of clinicians going “Oh goodness, you know drumming and therapy – when will this stuff ever stop?” Now I think you’ve got some quite firm views on that.

R: Yes. I means that’s the common refrain that I hear when I start talking to people in the medical profession – that drumming, rhythm is all hippie nonsense and there isn’t really any substance or science behind it. And I guess how I look at this is I sort of see rhythm as being where we think of yoga, meditation, and acupuncture where that was maybe 20 or 30 years ago that’s kind of where we are with rhythm. The difference is that in the last 20 years really, we have such advances in neuroscience. The whole concept of neuroplasticity, which I’m sure everyone’s familiar with.

R: But also we have the actual clinical controlled experiments using rhythm as a therapeutic tool. And so this involves MRI, functional MRI results as well as genomic signatures, stress receptors, things that are standard clinical evidence is now coming through using rhythm as a clinical tool. And so we’ve now got the sort of marriage if you like the art of rhythm but also the science of using rhythm. And so we’re seeing just to take a few examples.

W: We have people like Barry Bittman in the US … he’s an MD, conducted two years of experiments of using rhythm to reduce stress, to reduce burnouts and actually looking at the how people’s blood is different. So he’s discovered that natural killer T cells can be enhanced using a rhythm based protocol. Now that’s something that obviously cancer researchers, people recovering from cancer are very into and we’re seeing that now in the US, cancer survivor centers and places like that now incorporate some rhythmic based actually together with meditation and yoga as well. And also mindfulness which is very much in everyone’s mind at the moment. Also the whole mindfulness jargon now … also has a rhythmic aspect to it because rhythm and drumming is a very mindful for exercise. So when people like Dr. Bruce Perry of the Charles Trauma Academy in the US – he is a specialist, got his career looking at the neuroscience of trauma on the brain – and what he has concluded is some of the ways to regulate a person who is very sensitized and on a hyper arousal hypervigilant spectrum, that in order to get them to re-regulate their body and return to a sort of normal stasis if you like if thru pattern repetitive activity. For example, so drumming again is something that is often use in that childhood trauma area. We’ve also take people with hypervigilance from addiction using drumming. Drumming is a particularly good way for people who have difficulty in expressing their thoughts and their feelings verbally. Anybody can hit a drum, you don’t have to be physically active, you don’t have to be fit, you don’t have to be flexible, all you need to do is to be able to pick up a mallet and hit the drum. So we’re finding this being used with people with Post-Traumatic Stress Disorder, there’s been studies by Israeli researchers with Israeli combat veterans… drumming is a way that combat veterans can reenter sort of a communal feeling, destress, come back to that regulated feeling.

W: Now Robert a lot of our audience are in the aged care sector and I was interested on your thoughts about therapeutic use of drumming in some of the neurological disorders that affect the aged like dementia. Has there been work on that area?

R: Yes, there is. I mean dementia, there’s research showing that, postulating why there’s such a reaction to music from people with dementia. The results of that research was … that the area of the memory if you like was the area that wasn’t immediately affected by the neurological degeneration of dementia. So what we find with dementia, the cerebellum which is the primary area for rhythmic reception and processing, that’s an area that also did not immediately affected by dementia. So when people drum, that is something that they can still respond to even if they can’t speak, even if they have difficulty with other motor functions… They may not be able to do very much at all, but they can still respond to music, they can still tap their finger. And because the cerebellum is it has a roughly 10% of the volume brain, but it has more neuro connections than the rest of the brain together. And so people are using rhythm as a way of not only giving some exercise to people with dementia…well actually in aged care, it gives them exercise, it gives them something that they can do as a community thing and it gives them the sort of like neurological stimulation from the bottom up as it were through the connections into the limbic system and the diencephalon and cortex as well. And so to expand a lot further, there are now a lot of aged care facilities who are, you’ve probably seen the Alive Inside People putting the iPads on people in aged care, which is I think a great thing. And we can do further than that with physically getting people to coordinate and train by playing rhythmic instruments. And this is something that anybody can do with, you don’t have to be a professional to do it. And this is something that is now again becoming much more common in the US.

W: It’s an interesting field and every time I have conversations which are not mainstream, I’m forced to recall the fish oil conversations of 20 years ago when fish oil was all was hippy-ish and rubbish and nothing. And now when I go to a GP, he writes me a prescription for blood pressure pills and on the bottom of it he writes ‘and fish oil capsules.’ It’s just become mainstream medicine, so perhaps drum therapy’s headed the same way.

R: Well I think so. I think with the more research we have, well people have to speak out and pay attention that this is real research. This are people being put into an MRI by researchers and PhDs who are doing it so that we can create scientific validated response in our healthcare choices.

W: Drumming and rhythm, and singing and dancing , it goes back thousands of years in our cultural history and that’s something I think that we’ve kind of forgotten now out in this age of Netflix and things like that. The culture and the relationship connections that music has is a much more powerful therapeutic tool and I think people have previously given it credit for.

W: Now Robert one of my favorite questions is always about misconceptions. What’s the biggest misconception you find about the work that you do that drive you nuts and keep you awake at night?

R: I think the biggest misconception is people don’t think that there’s any science and they think it’s all just made up when in fact there is actually a lot of science now.

W: That’s a misconception that we might be able to help a little bit with today. And I guess people who want more information can probably find that on your website, that’s www.drumtherapy.com.au one word drum therapy dot com dot au. Robert I do appreciate your time today, thank you for being able to share that with us.

R: My very much pleasure. I put as much research that I can on that website because it’s meant to be a portal for people who can come and read it for themselves, make their own minds up about whether they think it’s interesting for them or not.

W: And I’m sure some of our listeners will do just that. If you’ve missed my conversation with Robert Harris, then you’ve missed a fascinating discussion about the use of drum therapy in therapeutic sessions. And the good news is we have a transcript of that interview on our website. You can also listen to the interview again on our audio archives on both YouTube and SoundCloud. The address for all of the Health Professional Radio resources is www.hpr.fm and the address once again for Robert Harris and Drum Therapy is www.drumtherapy.com.au. You’re listening to Health Professional Radio.