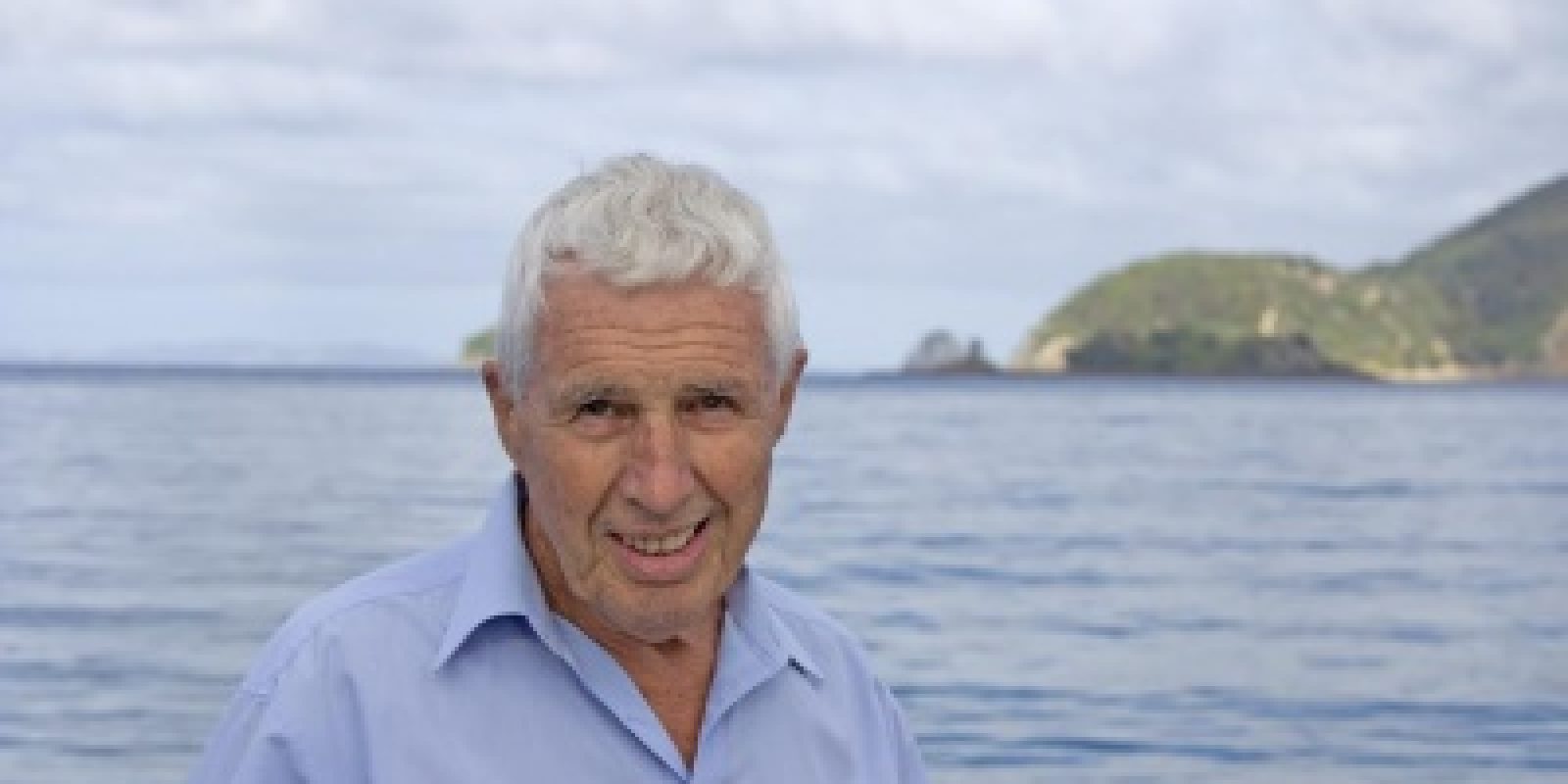 Guest: John Croft
Presenter: Wayne Bucklar
Guest Bio: John Croft has a unique mixture of skills, talents and qualifications, which has enabled him to help build, the marine nutraceutical industry in New Zealand. John Croft is regarded as one of the world’s leading experts on the life cycle, farming methods and therapeutic uses of marine extracts, including the remarkable New Zealand native shellfish, green lipped mussel. He is the author of five books, all of which have been very supportive of biotechnology: Life in the Sea; Relief from Arthritis: Deep Sea Shark Liver Oil; Health from the Sea, Freedom from Disease, Arthritis and Aging, A Solution from the Sea. John writes in a format that takes academic research and repackages it for public consumption; the same applies to his lectures. John’s career started out in the British merchant marine, where he spent 10 years at sea, three of which as a ship’s captain. In 1958, John took on the job as mate and master of a fishery patrol vessel operated by the British government, charged with investigating the effects of pollution from estuaries on marine life.

Segment overview: In today’s Health Supplier Segment, learn more about arthritis and the remarkable therapeutic uses of green lipped mussel from our guest John Croft. John’s job as mate and master of a fishery patrol vessel led to a job setting up a laboratory to carry out fisheries research. In the 1970s, John helped to set up a marine farm and research hatchery for the cultivation of New Zealand green-lipped mussels. John also recently teamed with Wagner to highlight more than 30 years of research into a new online research and learning hub devoted to the New Zealand Green Lipped Mussel. John is a strong believer in the principle of balance for everything in life particularly in matters of health. He points out that the oceans are the most balanced medium on our planet and it is this belief that has made him such an enthusiastic international lecturer on the broad range of health giving benefits of marine derived products which he backs up with the scientific evidence.

W: Now I understand you’ve been in Europe doing some lectures and some seminars and you’ve just released a new book. Tell us John what have you been up to?

J: Yep. I’ve been in three countries, three seminars all who are doctors in the United Arab Emirates, in Qatar and in Kuwait. And then on to Europe and in Germany I was speaking for that, in Switzerland I was doing staff training to people who actually market the product there. And then in the UK I was together with the media doctor there, doing some radio interviews there on BBC. Yeah.

J: Well I have, I have but I enjoy being busy and I believe that at my age it’s actually vital to be busy because if you stood still for too long you might just finish.

W: (Laugh) You sound a lot like me John.

W: Now you’re new book which is your sixth book in fact “Arthritis and Aging: a Solution from the Sea,” is this what you’re been training on?

J: Yeah, this is what I’ve been emphasizing Wayne. Over the years and I’m in 40 years now I’ve been working on the research into this particular product. But a lot of that in the early days was all about anti-inflammatory activity, treating rheumatoid arthritis, addressing osteoarthritis. But what has come up and what I was of course personally very, very involved with now is “aged related joint degeneration.” And I didn’t, I haven’t had arthritis but because of my age I am suffering, well I’m not actually suffering, but I’m experiencing joint degeneration quite naturally. But it’s not inhibiting anything I want to do, I’m living an absolutely full and active life. I believe that that is because we’ve discovered that this product also inhibits the enzymes naturally present in our bodies that actually cause that joint degeneration.

W: And this, the product we’re talking about is “green-lipped mussel extract,” is that right?

J: Yes, that is absolutely right. This specific one where all the work has been done on because unfortunately there are some others out there and I can explain later if you wish, why some will work and some will not do a thing at all.

W: Yes, it’s always a dilemma in some of these complimentary medicine areas to actually find the product that has had the research done on it.

J: I know and it’s difficult. I don’t like, I mean I’m totally independent, I worked for several international companies as an independent consultant. But it’s difficult, and I don’t like mentioning their names. But unfortunately that’s quite often the only way that people can know they’re getting the genuine article because in this particular case, a chemical analysis which is what you get with the certificate of analysis for the drug, it doesn’t tell you anything about whether that product will actually work or not when it’s a natural product like this. It can tell you what’s in there and all those components can be identical to the ones in the product that actually will work. And it’s just that they’re not in their bioactive state because the product was not processed correctly from the natural substance.

W: Yes and if they’re not bioactive, they’re of no use to you at all, are they?

J: No, not at all. And I often quote a very simple example of why things can look the same chemically, but not in reality is they’re a raw egg and a boiled egg. You know the same things are in there, you haven’t taken anything out, they’re still in there but there’s quite a difference between the two object. And now it’s a bit more complex when you’re talking about pharmacology and health and treating disorders but that’s the principle Wayne, yeah.

W: And John are you involved in growing these mussels as well?

J: I was in 1972, that was where I started with a little family fishing company that was going to set up mussel farms to grow them for food – in fact they did. And they employed me because I could skipper the mussels that we needed to do the farming and also I had the scientific background to study how to culture them.

W: I see. And so it’s been a long association with green-lipped mussels.

J: Well it has, it’s been the most amazing one. And I could not have planned this, this just happened. And knock from the door, but it was just an amazing 43 years since I came to New Zealand. And well I just can’t explain how brilliant it has been. And it’s serendipity, I was just standing in the right place at the right time and I happened to have the right qualifications that were needed, that was all.

W: I think sometimes the best career is serendipitous.

J: I think they are. I actually do, yes.

W: Now John is there research that supports the therapeutic effects of the green-lipped mussel extract?

J: Oh absolutely. There’s a lot of, of course the laboratory studies at which I’m involved with in finding out how does it do it and what are the components in there that do these particular things. But there is also clinical research that there have been at least 7 successful clinical studies, they were single blind the standards of these as they have done on drugs. And they have been also two done on animals – one of dogs, one on horses. And dogs are actually the very best responders of all, then humans and then horses, yes.

W: Oh my dog’s only a puppy but as he gets on in years, we might have to remember this.

W: And John we didn’t mentioned that the brand name before but we probably should. What brand do you recommend?

J: Well I think in Australia it’s called “Musseltone” and I think the company there is Vitaco Health or might be under the name Wagner. But that is the one that I’ve worked with all these years.

W: Well if people are looking for something that works, under the Wagner brand name or the other one you mentioned was Vitaco, was it?

W: I was just going to lead people to the website that I have here if they’re looking for more information. I have www.wagnerhealth.com.au/learningcenter/green-lipped-mussel all with hyphens. But I’m pretty sure if you search for Wagner Health, you’ll find the green-lipped mussel information on there.

J: Yeah, sure. And on an email, the company can contact me by email any question, any criticism, I am happy to take it. And just quickly, in the United Arab Emirates there were 92 doctors at the seminar I gave on this product. And some of them were orthopedic surgeons, some of them were new young registrars, the interest was tremendous. It was quite different from 40 years ago when I would have been regarded as a weird person with long hair in sandals. But then not now, the doctors were very interested, anything that will help these particular disorders.

W: John it’s been a pleasure having you with us this morning, thank you for your time. I understand that you’re currently in New Zealand and between international trips. I do appreciate you’re making yourself available to us today.

J: Well my pleasure Wayne. I’m always pleased if somebody is interested, thank you.

W: If you’ve just joined us and you missed my conversation with John Croft, a man with 40 years experience centered around green-lipped mussels. And regarded as one of the world’s leading experts in the life cycle, farming methods and therapeutic uses of marine extracts, including the New Zealand native shellfish the green-lipped mussel. The good news however is that we have a transcript on our website, and you can also listen to the interview itself on our archives on both YouTube and SoundCloud. They’re available on the station website at www.hpr.fm. This is Health Professional Radio, you’ve been listening to Wayne Bucklar.