Improving Clinical Follow Up For Women With Advanced Ovarian Cancer 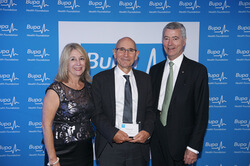 Presenter: Katherine Lodge
Guest: Michael Friedlander
Guest Bio: Professor Michael Friedlander was the founding Chairman of the ANZ Gynaecology Oncology Group (ANZGOG) and has held this position from 2000-2008 and remains on the ANZGOG executive and is currently the Research Director of ANZGOG. He is the Principle Investigator for ANZGOG in the US GOG as well as an ANZGOG representative to the Gynaecological Cancer Inter-Group (GCIG). Michael was a recent recipient of the Bupa Health Foundation 2014 Health Awards.

Katherine Lodge: Thank you for listening to Health Professional Radio. I’m Katherine and for this segment our guest is Professor Michael Friedlander. His interest includes Gynecological Cancers, Breast Cancer, Soft Tissues, Sarcomas and Germ Cell Tumors. He was the founding chairman of the ANZ Gynaecological Oncology Group and has held position from 2000-2008 and remains on the ANZGOG executive and is currently the Research Director of this organization. He is the recipient of the Bupa Health Foundation Health Award and he joins us today to talk about an innovative approach to improving clinical follow up for women with advance dovarian cancer. Welcome to our show Michael.

Michael Friedlander: Thank you very much. Thanks for the time.

K: Thanks for joining us. And can you give our listeners a bit of a background on the research that you want to talk about?

M: Okay. So this actually is research that’s currently in progress and that is funded by Bupa and I’ll give you with a background, so people have a better understanding. The majority of woman with advanced ovarian cancers are followed up very closely up to the completion of treatment. Unfortunately there is quite a high risk of recurrence of the cancer coming back after treatment and the aim of follow up includes detecting recurrence, providing psychological support and managing the late side effects of surgery and chemotherapy.

M: Now this approach to follow up is very variable but usually includes taking a history, asking specific questions, doing a physical examination, and doing blood test to try and help work out if there’s been any evidence of recurrence.

M: But there’s a lot of problems with the follow up and we hypothesize that if we use a more regular approach to follow up using a specific question medically developed called the “Measure of Ovarian Cancer Symptoms and Treatment Concerns” or MOST for short, that this would allow us to do a much more structured approach to patient follow up. And which serve two purposes – it would allow us to detect the symptoms of recurrence early and also very importantly capture all the side effects associated with treatment and be more effective than the routine clinical follow up.

M: And essentially this is what the studies is about.

K: I see, so three things on that. Firstly I wanted to highlight that so for someone that is not in the oncology field, I would have thought that any person with any cancer once they’ve been decoded and they’re in remission, I thought that regularly they should I don’t know what it is every 6 months or so, at least every annually that they would come in for a check up to see if the cancer has resurfaced. So it’s quite interesting to hear from you that the follow up and women are not doing these years after they’ve been detected.

M: So, no follow up. So now just to correct you so that the follow up is routine and all women who’d been diagnosed and treated for an advanced of ovarian cancer are follow up quite regularly in clinics, but we could improve upon this and actually make it a lot more cost effective. And also make it more likely that we can detect not only the symptoms of recurrence but also very importantly to treat all the other side effects associated with treatment. And one of the problems is that when you have a follow up in a very busy clinic, you might be in there for 10 minutes or 15 minutes so there’s not a lot that you can actually accomplish in that actual period of time, whereas if they have a structured approach using this questionnaire we could identify what the real issues were and then address them because there are many issues that women face after completion of treatment like … therapy.

K: Right. And Michael can you explain to us how this questionnaire is given? Is it in the clinic itself or is it posted is it over online or?

M: Okay I give you the information. So basically these are studies happening all around Australia and when women are recruited, they’re usually recruited at the lab when they have their final cycle of chemotherapy and most people get 6 cycles of chemotherapy about four and half months of treatment. And then they get a questionnaire every 3 months for 2 years and this is in the post or by phone by one our research nurses and that the questionnaires still done over the telephone and we are goanna be correlating the findings of this study that what actually happens in the clinic by going through doctor’s notes. And seeing and a capturing more information than is normally captured during our routine consultation and how the findings correlate with the doctor’s letters. And also importantly what’s missed in terms of symptoms and what could be done to try and improve follow up and the good thing about this is it’s applicable to women in regional and rural areas as well as in the city. And in fact it’s maybe a much more cost effective way of treating and for following up women as opposed to coming into a clinic.

K: Right, I see. Well it sounds like this will be very valuable and it’s going on for the next two years, is that correct?

M: Correct. So we have already started recruiting. We’ve already recruited about 350 women onto the study and we expect to recruit about a thousand. So at the end of this we’ll have a very clear idea about how useful it is and we’ll have a very clear idea of just what issues women face in that first 2 years of the treatment and that the late effects the treatment and what we can do to try and make life easier.

K: Right. Well I want to thank you for your time today Michael and congratulations again on the Health Award.

M: Thank you very much, ba-bye.