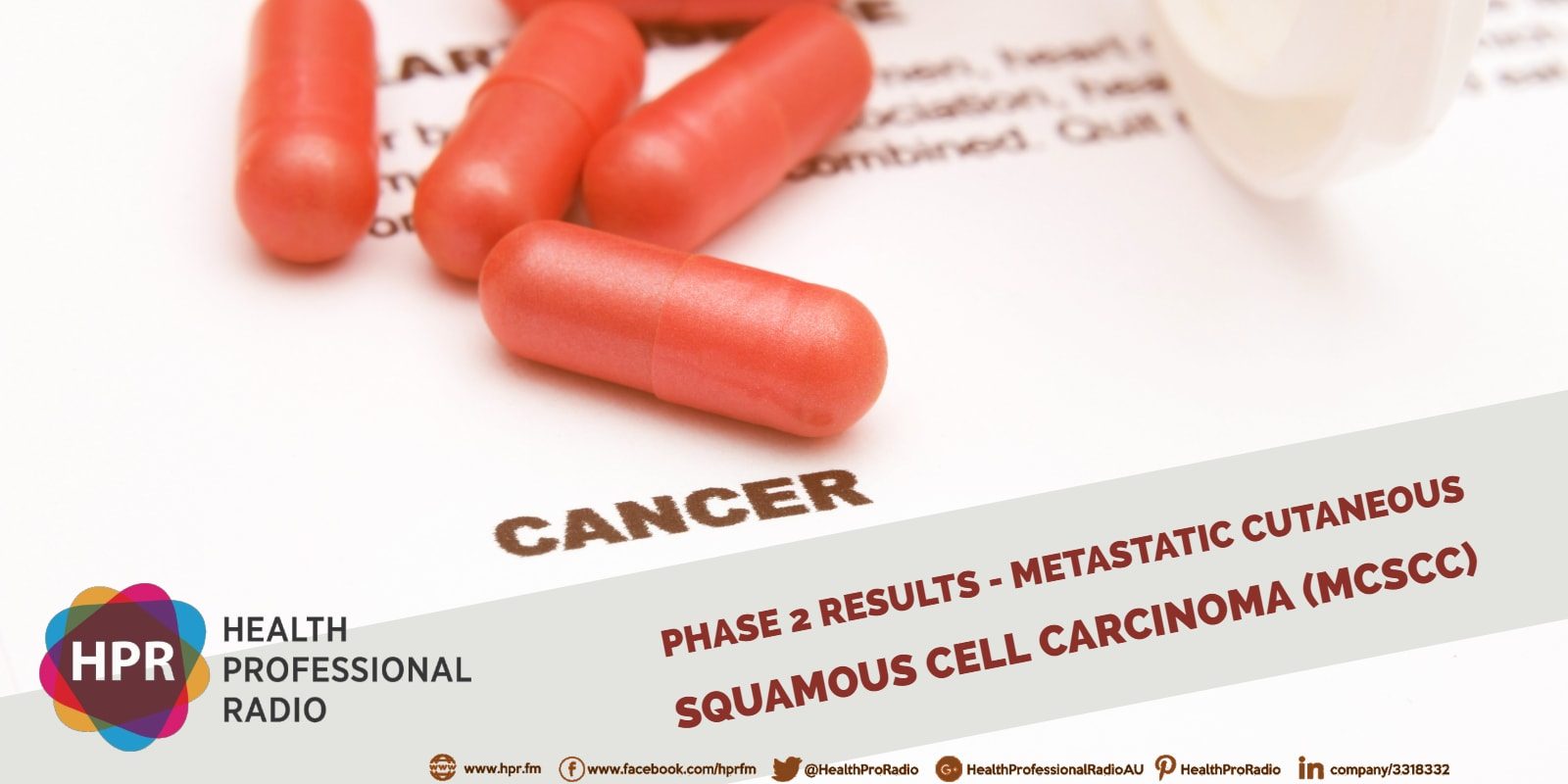 Professor Danny Rischin is the Director of the Division of Cancer Medicine and Head of the Department of Medical Oncology at Peter MacCallum Cancer Center. He is also a consultant Medical Oncologist at the Mercy Hospital for Women. He holds an academic appointment as Professor of Medicine at The University of Melbourne and in 2011 was appointed an Associate Editor of the Journal of Clinical Oncology. Professor Rischin graduated from Monash University and completed his internal medicine and medical oncology training in Melbourne and Toronto. He was Chair of the ANZGOG RAC from 2002 till 2011 and has been an executive member of ANZGOG since its inception.

Neal Howard: Welcome to the program. I’m your host Neal Howard here on Health Professional Radio. Our guest is Dr. Danny Rischin, he’s joining us today to talk about an American Society of Clinical Oncology Abstract that he recently authored and he’s going to talk about CSCC, a form of skin cancer and how it differs from other forms. Welcome to the program Dr. Rischin and thank you for taking the time.

Neal: So a bit of background about yourself, other than being obviously an MD involved in oncology. Give us a bit of your background.

Dr Rischin: Sure. So I’m a medical oncologist and I work at the Peter McCallum Cancer Center which is a large comprehensive cancer center in Melbourne, Australia and I’m the Director of the Department of Medical Oncology at the Peter McCallum. And I’ve had a long interest in head and neck cancer and in Cutaneous Squamous Cell cancers which arise in the head and neck cancer and that’s how my interest began in treating this disease.

Neal: Well let’s talk about this recent abstract that you are authored, how recent are we talking?

Dr Rischin: So the results were presented at the American Society of Clinical Oncology meeting, it just took place in early June and the results were simultaneously published in the New England Journal of Medicine. So obviously, it was recognizing the significance of these findings by both the presentations in ASCO and a high-profile publication.

Dr Rischin: So we’re talking about the Squamous-Cell cancer of the skin so when you think about skin cancers, we can divide them up into what we call nonmelanoma and melanoma  cancers of the skin. And the non-melanoma cancers are much more common and therefore comprised of what we call the Squamous-Cell cancers and basal cell cancers. The difference is that the prognosis for the non-melanoma skin cancers is much better. Most of them can be treated with local treatment such as surgery, but it’s a very common disease and this proportion that don’t which essentially relapsed and can’t be cured with standard treatment and that’s the group that was targeted in this particular trial.

Neal: The group that was targeted, were there any age guidelines or was it just a random thing as far as anyone, no matter what age that had this type of skin cancer?

Dr Rischin: Yes, so it was open to all ages. I think it’s important to highlight that this is a cancer that quite commonly occurs in the elderly. The main risk factor is ultraviolet sun exposure and it’s much more common in fair skin populations and in people that have had a considerable lifelong exposure to the sun. So the actual median age on the trial was 71. We do see it in younger patients for the oldest patient on trial was actually 93 and again that’s a little bit unusual for clinical trials to have such an elderly population but this is a disease that can occur in the elderly.

Neal: So you’re talking about lifelong exposure to the sun. Obviously if you’ve been in the sun that long and that often, you’ve experienced sunburn. You’re up in age and you’re experiencing sunburn but something’s a little bit different. What are some of the symptoms that say that this is something more than just your regular sunburn or a little bit of skin discoloration?

Dr Rischin: Well I think if you’ve got any abnormalities on your skin, a mole with changing color, obviously concerned about melanoma, any sort of abnormal lump that appears and you need to see a doctor and have it treated. As I said, the great majority of these are easily treated and cured but if they’re not treated or they just happened to be a more aggressive type, they can then either recur in that area and become hard to treat or they can spread through other areas of the body. That was really the group that we previously we didn’t have any effective treatment for.

Neal: What does the landscape look like as far as advanced CSCC in and is that something that was looked at specifically in the study?

Dr Rischin: Yes. So the trial this was published so far and what represented is in predominantly in patients that had what we call metastatic disease. So the cancer has actually spread to lymph glands or it’s spread to other organs and generally the patients were only eligible for the study if there was no curative treatment available that exhausted their surgery or radiotherapy options. And previously, we really didn’t have as much in the way of effective treatments. Chemotherapy had limited effectiveness and in fact on a worldwide basis, there were no approved agents for people with advanced Cutaneous Squamous-Cell Carcinoma so that’s why we were interested in studying this form of immunotherapy in this particular cancer.

Neal: How was quality of life addressed, if addressed at all, in the study?

Dr Rischin: We don’t have any formal quality of life measures, results at this point from use of the drug but this is a situation where patients had a very poor prognosis, often had lots of symptoms and many of the responses was very dramatic. We saw many examples of people who had very poor quality of life, who were unable to do any of their normal activities who were able to resume completely normal life in terms of activities as they responded. So without formal analysis, it’s fairly obvious to the quality of life, a high proportion of these patients improved dramatically.

Neal: In your opinion, what do you see as far as availability for this treatment?

Dr Rischin: Cemiplimab is undergoing a review for approval in the U.S. and in Europe at the moment so hopefully, that will follow through in the near future and then I think we’ll obviously it’ll be submitted for approval around the world so I think that’s probably the key in terms of getting access to the drug. It is a very large unmet need, this drug benefits at least half the patients in the situation so would be hopeful that we’ll get approval and become available for patients. I guess the access will vary from country to country to country but it’s not obviously, cemiplimab  hasn’t been approved yet.

Neal: Now as you wait on approval, what clinical research are you current working on in addition to this?

Dr Rischin: The trial, this drug has been looked at in Cutaneous Squamous-Cell cancer, we have a couple of different settings so we’ll see the results and patients that had disease with metastatic disease, there’s some more result of another group, there are other groups being studied including patients that have very locally advanced disease and then I think we are looking at biologic studies to try and … that have been taken to try and understand the differences in patients who respond and don’t response and so perhaps we can learn more about how to better use this drug or how to combine this drug with other drugs to increase the response rates even further. And then because the drugs are so active, I think the next step in terms of clinical trials will be to start looking at the drug at earlier stages of disease so potentially in adjuvant settings and patients that are high risk to see if you can actually prevent cancer from recurring or becoming or spreading to other organs. So I think there’s lots of opportunities now that we discovered that this drug and this approach is so effective in this campaign on advanced disease to change treatment, look at whether we can change our treatment paradigms and increase the cure rate overall.

Neal: Well we’d like to go online and learn some more. Where can we go and learn more about the Peter MacCallum Cancer Center?

Dr Rischin: the Peter MacCallum Cancer Center is accessible on the web at www.petermac.org and you can certainly learn more about our clinical services and our research on that website.

Neal: Well I thank you for joining us this morning and I’m hoping that we’ll talk to you again as approval takes place.