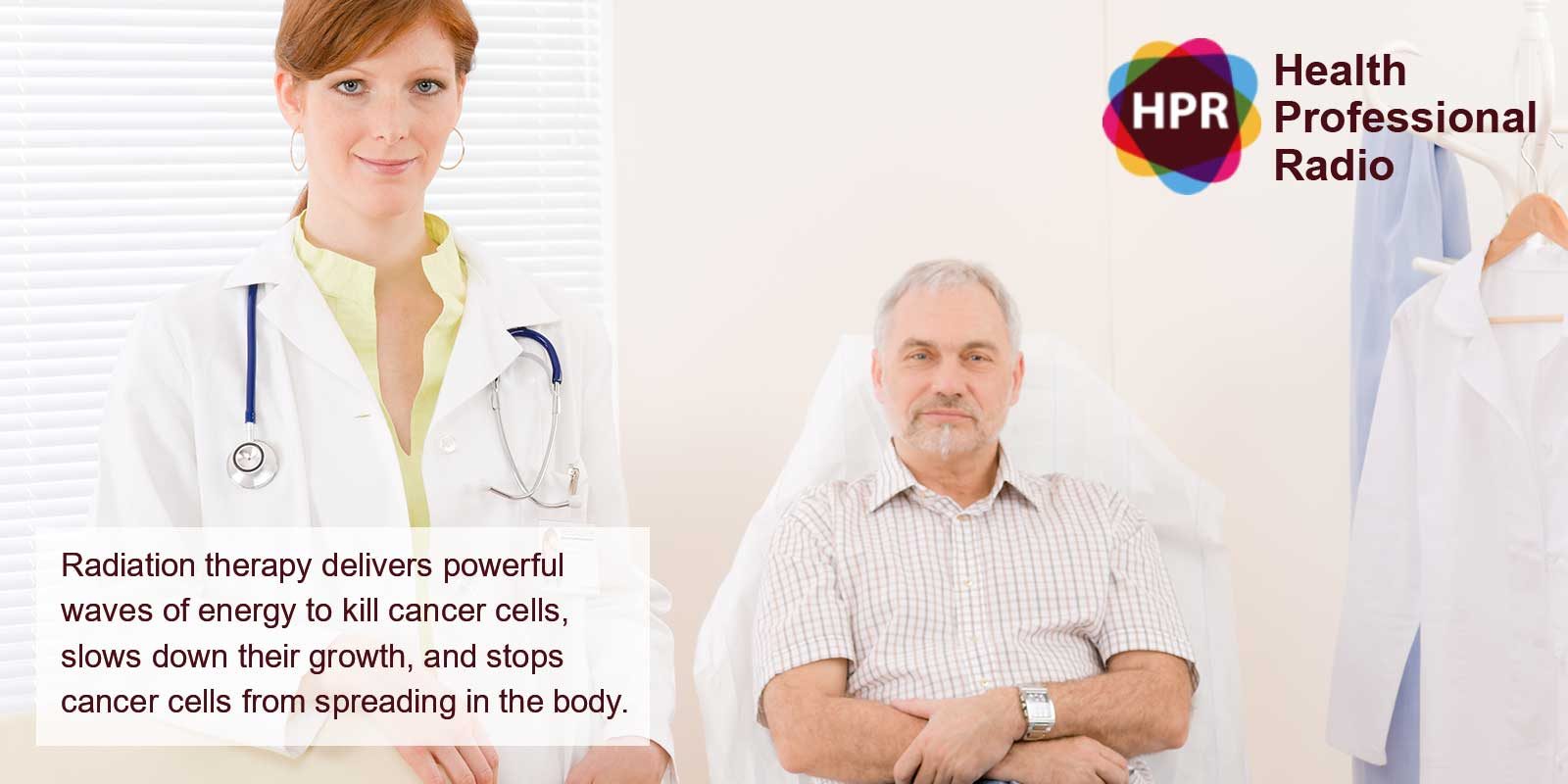 Returning guest, Dr. Edward Soffen, MD, from the ProCure Proton Therapy Center in Somerset, NJ, discusses all forms of radiation therapy to treat prostate cancer. Radiation therapy delivers powerful waves of energy to kill cancer cells, slows down their growth, and stops them from spreading in the body.

Dr. Soffen treats patients at the ProCure Proton Therapy Center in Somerset, NJ, and through Princeton Radiation Oncology. He is a leading expert in the treatment of cancers of the genitourinary tract, particularly prostate cancer. He offers extensive experience in all forms of radiation therapy for prostate cancer, including not only proton therapy, but also high dose and low dose rate brachytherapy (radiation implant). He was one of the researchers involved in a pivotal study establishing the use of an absorbable hydrogel spacer to further improve the safety of radiation treatment for prostate cancer.

Neal Howard: Good morning. I’m your host Neal Howard here on Health Professional Radio, glad that you could join us once again. Our guest is returning with us, Dr. Edward Soffen, he treats patients at the ProCure Proton Therapy Center in Somerset New Jersey and he’s returning to the program this morning to talk with us about forms of radiation therapy to treat prostate cancer. Welcome back to the program Dr. Soffen, how are you?

Dr. Edward Soffen: I’m fine. Thanks for having me back, I appreciate it.

Dr. Soffen: Right. Well first of all, I want to say we’re coming up to the Prostate Cancer Awareness Month so I think it’s very important that men understand about screening, the importance of screening and finding out whether they have prostate cancer because when it’s found and treated early, it is extremely curable. Now one of the things about protons which is a form of radiation is that the proton specifically seeks out the target, or in this case the prostate, and the particle the proton particle gets laid down or stops right in the prostate and gives off all of its energy there so there’s really no exit radiation. With conventional x-rays or photons or IMRT, there’s an entire track of radiation that’s deposited from the skin that goes through the prostate and out the other side. This is like a smart bomb that gets targeted right into the prostate, stops, gives off all of its energy and kills the cancer.

Neal: Well you mentioned catching it and detecting it early then it’s extremely curable. What are the some of the symptoms that we should look for and how can those symptoms prompt us to have this treated very early?

Dr. Soffen: Right. Well first of all, the most common symptom that men present with is no Symptoms. In other words, it can grow very silently for quite some time so it’s important that men get a digital rectal exam and also have their PSA checked that stands for prostate specific antigen and it is a blood test which can give us an indication that there might be something going on. Now in later stages men may have changes in their urinary function, they may have difficulty urinating. Now that may not be a symptom of prostate cancer but it also could be that there’s a change in the prostate going on. And then in more advanced cases men can present with symptoms where the cancer has spread like bone pain but the really, the most common symptom is no symptom. It’s really picked up incidentally on a routine physical exam or a routine blood test.

Neal: So this does pinpointing of the target, does that preserve other organs? Cancer spreads and chemo also and radiation therapy also damages some of the surrounding organs around the target. Is that eliminated with this proton therapy?

Dr. Soffen: Well that’s a great question. It is minimized to a great degree. You’re right that radiation chemotherapy can affect normal cells and you only get side effects when normal tissues are treated. And what’s nice about proton specifically a technology that we have which is called pencil beam scanning or spot scanning, we can paint little dots of protons throughout the prostate so that we cover it in a very three-dimensionally conformal way. By doing so, we radiate less normal tissue. There’s less bladder, there’s less rectum, there’s less intestines and bones that get even these low doses of radiation so the side effect profile is so much less. Men tolerate the proton radiation to a much greater degree than with conventional treatment because there is so much less normal tissue that gets in the way.

Neal: Is this something that is used only when it’s discovered early or can this be used whether they’re in late stage of prostate cancer as well?

Dr. Soffen: Right. Well we treat early, mid and late stage – what we call low risk, intermediate or high risk prostate cancer. The fields may change a little bit but almost everybody would be considered a candidate for protons. What I was suggesting is that the earlier we catch the disease, the higher the likelihood that that man will never hear of it again after he’s done treatment so it just we want to catch it early because the cure rate is so high. Now we still cure a lot of patients who have more advanced disease but it may require the addition of hormones to the protons or even chemotherapy so it’s still very curable, we just want to get it as early as possible.

Neal: Is this a standalone treatment or is it ever an instance where it’s used in conjunction with other treatments based on the severity or lack thereof of the patient’s cancer?

Neal: Does age ever factor in whether or not you would like to use this type of therapy?

Dr. Soffen: Absolutely. Prostate cancer, if it is slow growing it may take many years to grow and spread and threaten a man’s longevity. So if we have a very old man let’s say 90 years old whose life expectancy is less than a few years, we could cure him with protons but we probably don’t have to. On the other hand, what we do is we look at the severity of the disease and we look at the man’s age and his life expectancy and many 85 year old men are quite healthy and quite virile and are looking at another decade to live and if they have an aggressive cancer then we would offer them proton. It’s interesting too, the older men tolerate protons. I mean we see a difference in how they tolerate it also depending on their age because their normal tissues don’t repair as easily and as readily as they do when they’re young or so even an older man would be a great candidate for protons because his bladder and his rectum will tolerate the treatment to a much greater degree.

Neal: Now talk about some of the other treatment options that are available for patients.

Dr. Soffen: Well one of the things that we offer men is a fairly new procedure called SpaceOAR where we can inject a gel between the prostate and the rectum and basically what it does with this one-time injection that lasts for three months, it moves the rectum away from the radiation beam. Normally the rectal tissues are right up against the prostate and there is a modest degree of risk of irritation of the rectum. This hydrogel, this SpaceOAR moves the rectum away from the prostate and it gets virtually no radiation at that point so the side effect profile has gone down dramatically. We’ve also found that this SpaceOAR gel helps men maintain their sexual function so it’s a win-win on all accounts. It’s one of the few places in the Tri-state Area that offers this SpaceOAR hydrogel for men with prostate cancer. We have extensive nursing service, we have a concierge service so that if patients are coming from far distances, we have a lot of international patients – we can help with housing, with transportation if there are tickets that they might need help in getting or educational services. So we sort of offer a broad range of social services as well as nutrition but in terms of cancer therapy, it’s really limited to proto.

Neal:  Well we’d like to go online and learn a lot more about ProCure, where can we do that  online?

Dr. Soffen: Well I think if you google ProCure therapy or proton radiation in Somerset New Jersey, our website will come up or they can go to www.princetonradiationoncology.com and there’s a whole section of all of our prostate cancer treatment options as well as a link to ProCure.

Neal: Great. Dr. Soffen has been a pleasure as always, thank you so much for returning with us this morning and I’m hoping to talk with you in the future.

Dr. Soffen: Thank You Neal. It’s been a pleasure and have a great day.