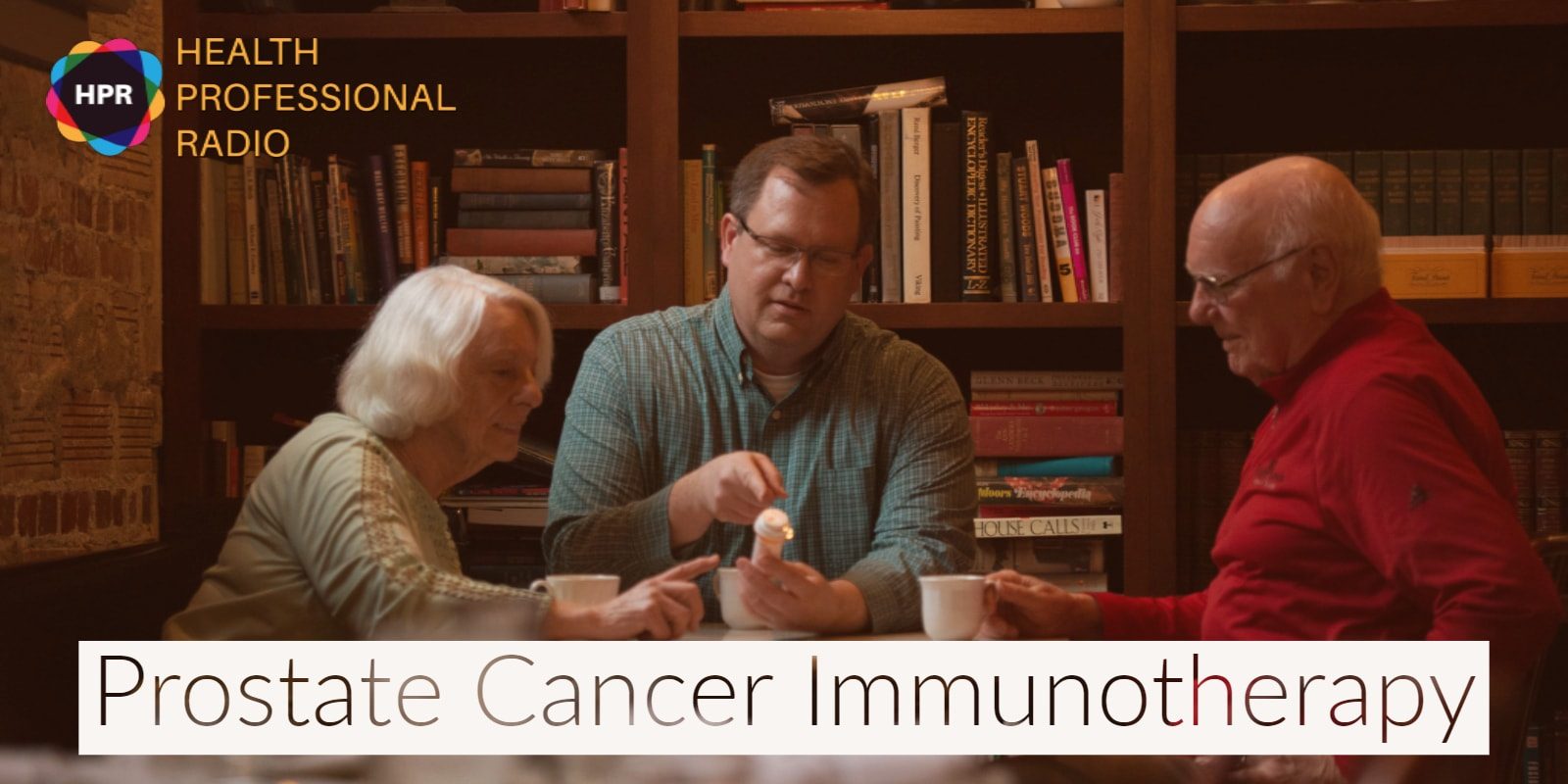 Dr. Bruce Brown, M.D., a certified urologist and SVP of Medical at Dendreon Pharmaceuticals LLC discusses PROVENGE (sipuleucel-T), the first FDA approved immunotherapy that is approved for use in men with advanced or metastatic castration-resistant prostate cancer. It is a prescription medicine made from your own immune cells and has been prescribed to 30,000 men to date. He also discusses the latest developments within the space as well as some of the lessons that Dendreon learned along the way that are helping to advance today’s therapies.

Dr. Bruce Brown has more than 20 years as a board-certified urologist. He is driven by the promise of improving the lives of men living with prostate cancer. He bridged th gap between community practice and leading medical strategy for major pharmaceutical companies. Dr. Brown has a firm grasp on how achievements in drug discovery can translate into improved patient outcomes in real-world settings.

Dr. Bruce Brown: Thank you, it’s good to be here.

Neal: Now I did mention that you are a certified urologist and Senior Vice President of Medical at Dendreon Incorporated. Give us a little bit more insight into what you do.

Dr Brown: Sure. So in terms of my urology background before I went into industry. I’ve trained as a urologist and I practiced urology in a community setting for 17 years. The past six years I’ve been in industry, in the past seven months I’ve been working at Dendreon as Senior Vice President of Medical. I oversee our medical affairs, research and development and regulatory function.

Dr Brown: Sure. So I actually have a long experience treating prostate cancer and I’ve seen it from multiple angles for my urology career when I was practicing obviously I was taking care of many patients with all different stages of prostate cancer. And to be honest, at some point when the patients became metastatic or their disease had spread, for most of my practice career it was honestly a little bit frustrating because we had limited options. We know that the food so to speak for prostate cancer is the male hormone testosterone so we could do several things to lower the male testosterone and that would usually work for a period of time and then the disease would continue to progress. And after that until really the end of my practice career, there wasn’t much that we could do that really significantly helped these patients. Turn that around to the time when I was in the industry starting at my time before Dendreon and at Dendreon, and now we have six approved therapies for metastatic castrate-resistant prostate cancer. So over the past six or seven years, it’s really a new era for these men and their family.

Neal: Now this new era as you say of prostate cancer research and treatment, where does immunotherapy fall in this mix?

Dr Brown: So immunotherapy and PROVENGE in particular which is the Dendreon drug is one of the approved therapies for metastatic castrate-resistant prostate cancer. One chemotherapy was approved in 2004 and the next one to be approved was PROVENGE in 2010. Now keep in mind, you hear a lot about different types of the immunotherapy today for all different types of cancer with good reason, there’s some great results. But in 2010 when we were approved, we were really a trailblazer because we were on the cutting edge and before a lot of the drugs that you’ve heard about today to treat lung cancer, melanoma, etc. So it was a different era and a different way for doctors to think about treating cancer with the immunotherapy.

Neal: Is cancer different, about prostate cancer even in its advanced stage significantly different now than it was as you say toward the end or even better the beginning of your practice dealing with prostate cancer? And then if it is different, is PROVENGE the result of that change?

Dr Brown: Sure. So it is somewhat different but it’s different in a good way. The disease, we start to see some variant later in the disease after people have been treated nowadays and these were variants that we didn’t see that up at 2012. The reason is however, these patients are living longer so by all these drugs including PROVENGE extending patients lives, we’re starting to see what the cancer kind of morphs into or changes into, and mutate into at a later date. Some people would say that’s a bad thing but I like to say it’s not necessarily a bad thing because in decades past, unfortunately patients would pass away because they didn’t have all these treatment to extend their lives.

Neal: Mentioning life expectancy, what about quality of life as it relates to late stage metastatic prostate cancer?

Dr Brown: Yeah, that’s a good point to bring up. A lot of doctors who treat cancer have told me “I want two things for my patient. And this reflects what my patients want – they want to live longer and they want to live better.” So just because you can extend someone’s life if the toxicities of what you’re giving them, ie the drug, are so significant that the patient has no quality of life, it’s not much of a benefit. And many drugs including PROVENGE have a very manageable safety profile so you can give patients both those things – they can live longer and they can look better.

Neal: What about immunotherapy as a vaccine, is this something that can be used to prevent cancer from developing in the first place as far as prostate cancer is concerned?

Dr Brown: So many people refer to our drug PROVENGE as a vaccine. It’s probably more specifically a therapeutic vaccine, so it’s something you’re given after the patient has prostate, not like typically what most of us know of vaccines are what we take as kids or give our children to prevent certain diseases. This is a little different way of thinking of it but it does the same thing. It primes the immune system to do the work. So it’s a different way of looking at things with the immunotherapy is that it’s stimulating the immune system to fight the cancer versus conventional or older type of chemotherapy that was killing cancer cells as well as normal cells.

Neal: When you say it stimulates the immune system, are there other factors that need to be introduced in addition to PROVENGE? Say things that generate white blood cells or any other mechanism along with PROVENGE.

Dr Brown: Right. No, there’s nothing else that needs to be given. One of the good things about PROVENGE versus some other treatments is it doesn’t do anything your counts of white blood cells or red blood cells. And obviously if don’t have red blood cells, you can be anemic which then cause trouble and if you don’t have white blood cells, you’re more prone to infection. So no, PROVENGE in itself doesn’t require anything else, it’s got a couple things that it does. It is programmed to target prostatic acid phosphatase which is a ubiquitous protein found on prostate cancer cells. And then it has an immune stimulating factor so it stimulates the body’s immune system to then fight that tumor. So it gets you to the tumor so to speak and then it stimulates the body to fight it itself.

Neal: Now I understand that PROVENGE has been given to roughly 30,000 men. Out of those 30,000, have the results revealed the ideal candidate for PROVENGE and may be the candidate who is just not going to benefit from a PROVENGE?

Dr Brown: So what we’re seeing is the earlier in the course of the disease and are labeled in the case in which is metastatic castrate-resistant prostate cancer, the earlier in that spectrum of disease, the earlier it’s given, the better it works. And that’s for a couple reasons – one, the earlier patient in that spectrum or stage of disease had lower tumor burden so immunotherapy can work better when the tumor burden is lower. Also, the further out you go, the worse the body’s immune system is. So if you go earlier, the immune response which is needed for PROVENGE is more robust and it can let the body do its work. And then with the immunotherapy, it does take some period of time to work so again obviously earlier in any part of the disease the patient has longer to live and then the body can rev up its immune system and work against the cancer.

Neal: Dr. Brown give us a website where we can go and learn more about Dendreon Incorporated and some of the therapies that you develop there.

Dr Brown: Sure, dendreon.com or provenge.com, both have information about PROVENGE and Dendreon, information in general about our company.

Neal: Thank you so much for joining me today here on Health Professional Radio, it’s been a pleasure.

Dr Brown: Okay, thanks very much.

Neal: You’ve been listening to Health Professional Radio, I’m your host Neal Howard. Transcripts and audio of this show are available at hpr.fm and at healthprofessionalradio.com.au. You can subscribe to the podcast on iTunes, listen in and download at SoundCloud and be sure and visit our Affiliate Page at hpr.fm