Shenanigans at the VA 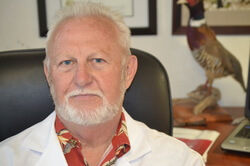 Presenter: Neal
Guest: Dr. Gary Ridenour
Guest Bio: Dr. Gary Ridenour attended medical school in Guadalajara, Mexico and ran his own clinic out of a Catholic Church.  Dr. Ridenour ran the ER at St. Louis City Hospital and later set up his first rape Treatment Center at the same facility.  He was a physician with the VA Medical System from 1977 to 1980 and moved to Nevada in 1981. Dr. Ridenour is an author and an authority on several subjects including Avian Flu.

Segment Overview
Dr. Gary Ridenour tells stories that indicate the lack of leadership and attitude of indifference that has been allowed to flourish within the VA Healthcare System.

Neal Howard: Hello you’re listening to Health Professional Radio. I’m your host Neal Howard. Thank you so much for joining us today, Dr. Gary Ridenour has joined us in studio today. He received his medical degree in Guadalajara, Mexico. He’s also done work in Regina, Saskatchewan as well as St. Louis East in Fallon, Nevada as we’re speaking. He is here today to talk with us about some of his experiences within the Veterans Administration in the United States. We were here in another segment talking about some of the reasons that history of poor care scandal has taken places over the years within the Veterans Administration System. And we’re here today to talk about some of the things here in the modern day that are plaguing our system. How are you doing today Dr. Ridenour?

Dr. Gary Ridenour: I’m doing fine. How are you?

N: Great. You worked at the Veterans Administration from 1977 to 1980 and as someone that received their medical degree abroad due to being well refused in some of the learning institutions for well “rocking the boat,” it seems that some of that rocking the boat translated into a much better care for some of the patients that you were saying who weren’t receiving good care at the VA system. Is that right?

R: That’s right. One time there was sometimes the street people that lived under bridges and that would come in emergency room and they knew I was on, they come in and crawl upon a cart and they sleep for a few hours and they give us a one … meal a night and I give the guy the lunch and my milk and he’d eat it, and I say “Okay Jap time to go.” And he’d go “Thank you” and out the door he would go. So we got a notice from the VA that if any street person had family in another city, if we did the paperwork they would transfer him to the other city. So I collected five of my sickest and worst street men and we did the paperwork and then I put a Hawaii phone book and opened it up in front of them, and they said, “You know this phone book is from Hawaii here and you see a relative here we’ll put it on the piece of paper here and you can go to Hawaii and they’d go “Oh wow, there is my uncle.” And so we fill it out and so we flew five of these guys to Honolulu.

R: And then the next year I was making rounds and the FBI came up and said, “We’d like to talk to you.” And so I went up to the principal’s office and the administrator goes, “Did you fly five Veterans to Honolulu? And this went across this desk and there’s no paperwork.” And then I went “I don’t know what you’re talking about. Where is the paper work?” And he goes, “Well you know our big VA repository had a fire that burned for three days and we think that those papers were destroyed.” And I said, “Oh okay. Well we’ve got the FBI here. Did they catch any of these guys?” And he goes, “We don’t have names on them anymore.” And I said, “So we have no men and we have no papers.” And he went “Right” and I said “I’m going back downstairs and take care of patients.”

N: Why are you wasting my time? (chuckles)

R: Yeah. And he said, “I will get you. I will send you to Leavenworth. I haven’t forgotten last year when you hijacked an elevator with a water pistol to get up two floors where there was a cardiac arrest going on.”

N: Okay, so you’re working at the VA and you hijacked an elevator with a water pistol. You’ve got to tell me about that.

R: With a water pistol.

N: You’ve got to tell me about that.

R: Well, I mean that’s the way. There were so many holes in the system that you could do things like that. We have real card raises and all kinds of things and the most of the full time physicians were older and they we’re just kind of walking through the program and every other hospital that I worked at, we would have a VA taxi fund which was money that we kept and if a guy who’s in the emergency room and they want us to admit him, if we found out that he was a vet we took the money and got a cab and pay the cab to take him to dump him to the VA hospital.

N: Right. It’s reminiscent of some of the episode on Mash back in the 80’s.

N: I mean as you say, so many holes in a system. Our Veterans are believing that the government is going to take care of them, that their service is going to be rewarded at least with the kind of medical care that you would expect from the government that you fought so proudly for. But you’re having to manipulate the holes and the lack in leadership in the system in order to give adequate care. So basically if you went by the book, you were not going to provide adequate care through the VA system as a medical professional there, were you?

R: That’s true. And also, you never saw them an officer in the Veterans administration. You never saw anybody of the rank of lieutenant come in. Those people were good enough and intelligent enough that they’ve got better insurance and never showed up at the VA hospital.

R: Right. And then the Bureaucracy had two levels of patients. If you’re an active duty and you were shot or something or you fell off and broke your leg or developed a heart attack or whatever, then when you’re discharged your Veterans card was called “service connected injury”.

R: At this point these groups were up in their 50’s and 60’s so we were seeing lung cancer, progressive heart failure, alcoholism, an awful lot of alcoholism. And so we were treating the World War II vets and it was really hard but at the same time, starting in 2011 they started a bonus program for doctors in the VA system and one guy named Jeff who is a doctor – you can find this in internet – he got $23,000 bonus one year. Alfonso got 25, 25, 20, and 18.

N: So these were into the thousands, right?

R: Thousands. Good old Charlene and when I said you could find this on the internet – their real names – good old Charlene made $50,000 in five years and these were not for performance, it was more like for incompetence. One surgeon walked out of an operation that he was watching the residence surgeons do, got into his car and drove away. So they suspended him for two weeks, he came back and his bonus that year was $12,500.

N: Oh he got $12,500 for walking away from an operation that he was overseeing.

R: He’s walked away from the operation, yes.

R: In ten years, the government has put 520 Million dollars into the VA system just to pay the bills. In the same ten year period, 845 Million went out the door in lawsuit settlements.

N: So do you think that these bonus programs were maybe a catalyst for what we’re seeing today?

R: Yeah it is because you go and come, “Well I’m gonna get out of the VA.” And you’ve got a “Oh man listen, we’ve got these darn bonuses and we don’t work hard. And if we screw up and they fire us, we can just move on to the next VA because they don’t check each other.” There was a guy that was named Paul Kornak and he has no papers at all, he was in two or three VA’s. The last VA he was in, he killed five Veterans.

R: And due to overdoses and chemotherapy.

N: Okay. Were all the cases chemotherapy or…?

R: Yes. And he was taken to court and the families were there, the VFW, the American Legion and all other government associated agencies were told to stay away from the court case. And this guy after killing five people, he was sentenced by the judge to six years in federal prison and one year parole for killing.

R: Yes. It was Judge Fred Scullin and he was a veteran himself but was notorious for not being fair to Veterans. So it’s no such surprise to anyone that this guy is Paul Kornak is probably going to be out of prison this year.

N: It seems this all entire history of the Veterans administration from, well, it’s a beginning as Veterans Bureau up to today the Veterans Administration Healthcare System plagued by scandal, inadequacy, poor leadership and a bureaucracy at its worse. We’ve been in studio today talking with Dr. Gary Ridenour who was with the Veterans administration from 1977 up to 1980. He’s practicing now in Nevada and we’ve been talking about the VA scandal and a little bit about Dr. Ridenour’s life. You’ve been listening to Health Professional Radio. I’m your host Neal Howard, it’s been a pleasure having you in studio today with us Gary.

R: Thank you very much. It’s been a pleasure.

N: Transcript of this program is available at healthprofessionalradio.com.au and also at hpr.fm