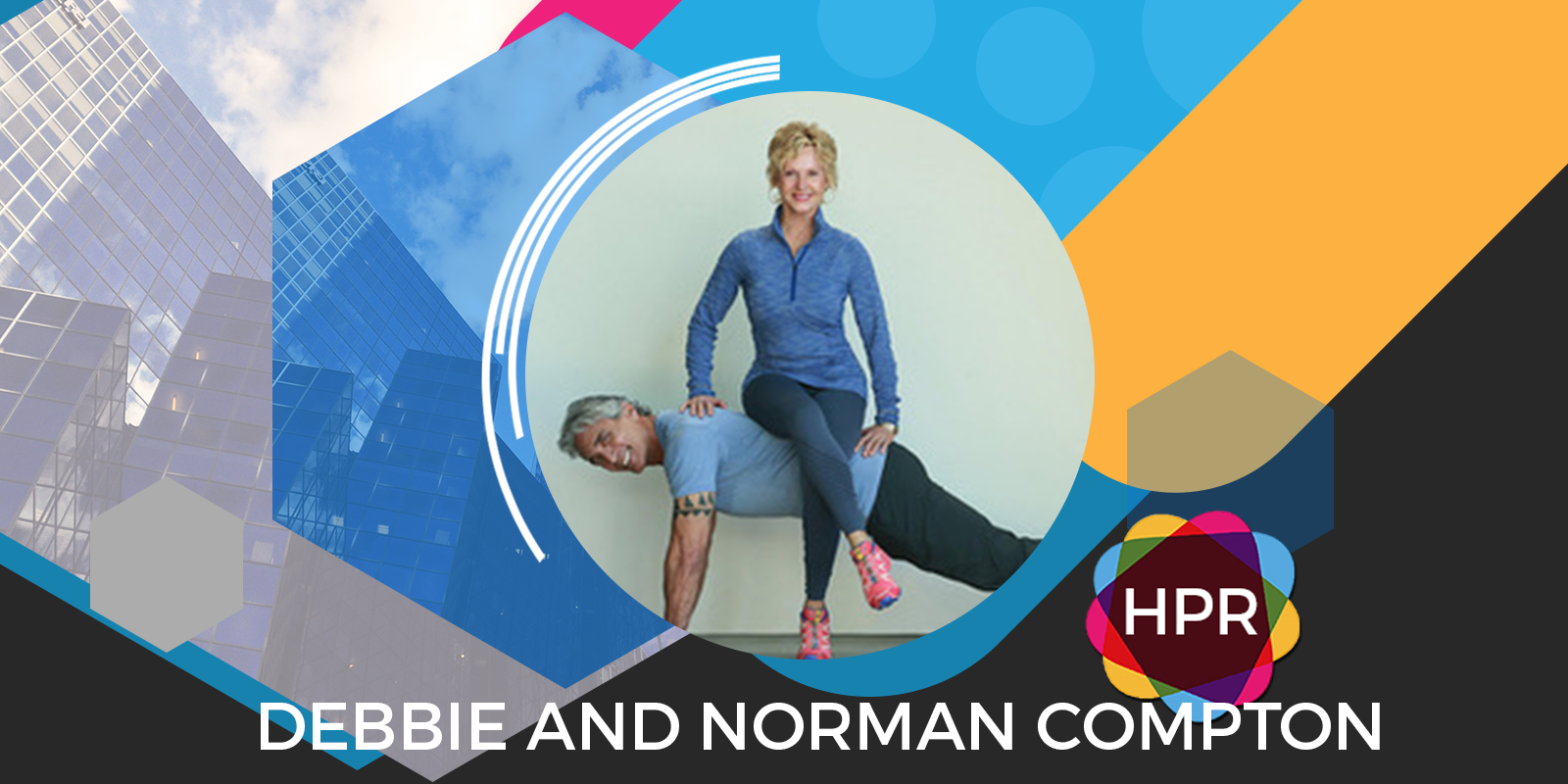 Guest Bio: Health and fitness coaches, Deb and Norm, have been rocking it for a combined 80 years. Norm started his career as a Hollywood Stuntman on the TV show “Magnum PI.” Then at the age of 47 became Dwayne “The Rock” Johnsons stunt double on his debut blockbuster movie “The Scorpion King.” Deb, a medical exercise specialist, calls Norm her science project because of all the times she’s had to put him back together so many times. Deb’s specialty, working with the special needs population and those with serious issues such as Parkinson’s disease, knee, hip and shoulder replacements, fused disks, upper and lower, spina bifida, she strives to find answers for the injured who come to her looking for help. Also, dealing with her own issues like living with scoliosis forced her to find solutions. Deb and Norm Compton live what they preach! Compton has been medically certified with the American Consul of Exercise as a Health Coach and as a personal trainer for over 25 years.

Segment Overview: Debbie and Norman Compton discuss their recently released book “Stacking – Your Skeletal Blueprint for Posture” and their unique approach to fitness.

Neal Howard: Welcome to Health Professional Radio. I’m your host Neil Howard and I’m glad that you could join us today. Our guests in studio today are Debbie and Norman Compton and they’re joining us here on the program to discuss their recently released book, “Stacking-Your Skeletal Blueprint for Posture. They’re also going to talk about their unique approach to fitness and give us a little insight into what it is they do?, where they do it? and who they do it for? Kind of introducing a new discipline in fitness. Welcome to the program both Debbie and Norm. How are you both today?

Norman Compton: Hi, good morning and thank you very much for allowing us on your show.

N: Now, you two are fitness powerhouses. You’ve been at it for quite a while. And Norm, why don’t you give our listeners just a little bit of background about yourself to show just how varied your background is?

C: I was born and raised in a town called Kailua, on the island of Oahu in the great state of Hawaii. And living there, I’ve always been active in all the sports from football, soccer, baseball. That’s the nice thing about our age as sports people growing up is that back then, we didn’t just hone in on one sport. When you were 8 years old, you played a lot of sports. We didn’t just play age sport. And then I met Debbie while in Hawaii and I was only 20 years old at that time and she just graduated from college. And we went on our first date. She was visiting Hawaii and never left.

N: Quite an impact Norm.

N: Little did she know.

C: Little did she know. But one of our first dates that we did is, it’s kind of interesting because it really comes all the way back to our book here. But our first date that we did, we went jogging around in Waikiki on a park called Kapiolani Park and I noticed that while we were jogging that her feet were not pointed like a jogger. It would point their feet which is important when they are running. She was pointing her feet like a ballerina which points her feet outwards the side. And I knew that something was going to happen to her knees if she didn’t correct that. And so our first date, it was me trying to correct her feet. I’ve had no idea what I was doing. I was just saying that it needs to go because this way this is how we run.

D: He thought it looks funny. But I was a ballerina. I’d grown up in dance classes as a young girl. So that influences me and it gave us a lot of insight of how life can shape us even from childhood.
C: We went to the beach and then when I saw her feet, she had like beautiful feet and she said, “They were pointed in the wrong direction.”. And then I became a stuntman in the movie industry on “Magnum PI” when I started filming. I used to be a performer in Hawaii where I had a group and we do all the popular songs of that time. As a matter of fact, the place that I sang at was owned by the Denver Broncos. The owner of the Denver Broncos, Mr. Pat Bowlen and he owns a restaurant in Hawaii that I sang at. And while singing there, Tom Selleck used to come in on a nightly basis and we became friends and we started playing softball against each other and they saw that I was a good athlete and they asked me if I’d be interested in getting into a fight with Tom. I said, “Okay sure, why not?”. I ended up doing about 20 episodes with Magnum PI and we became real good friends. I get to know his whole family, his parents and his brothers and they all came to Hawaii to visit. And then we decided to kind of get more serious about that and move here to LA. And while in LA, while I was trying to become a serious stuntman, my wife and I, while she was looking for something to do, we both got certified and she started taking it really serious while I was trying to take this stunt work a little more serious.

N: Were you interested in fitness and health before you got your feet analyzed by your future husband or is that something that you’ve been thinking about?

D: No. I had always found it very interesting and intriguing and that’s just how the body function moved. And in college, my electives would always be something like gymnastics or something just because I always wanted to be physically aware. So I found it intriguing that he pointed that out about my feet and I took it on as a challenge.

C: But then I took her in a totally different direction. Back in those days, we used to lift at our gym. We did what we called the Football Lesson, which was the big three, which was bench press, squats and power clean. And her, never ever lifting weights before, I mean not knowing any other lifts, that’s what I taught her how to lift. So that’s our first list. It was learning how to do the squats, the power cleans and bench press.

D: And I loved it. You either get this and find it intriguing to understand how your body functions or you don’t. And so, we’re hoping that when we present things very simplistic and I guess, everyday language instead of science language and to make people be more interested. When I started out also just teaching aerobic classes, in the 80s that was a big thing.

C: Actually, Debbie was the first personal trainer in Hawaii. No one else is doing it and somebody actually started paying her and she worked out as a trainer for Sylvester Stallone’s wife Sasha, his first wife. We were good friends. The Stallones and us, we’re good friends when we’re in Hawaii.

N: So this book, Stacking – Your Skeletal Blueprint for Posture, you said that your analysis of Debbie’s feet would kind of lead up to the writing of this book. Talk about this book and it’s intriguing title. What exactly is “Stacking?”

C: What it was, is that Debbie and I, we’ve had to come up with a process in order for us to get our bodies and we were mainly focused on us and it just so happens that Debbie was working with people that had special needs and whatever we did for us seemed to work for them. And whenever I was injured in a stunt, we would start with our process that Debbie had been using and it would be starting at the feet. Our feet are the most important thing. And what’s interesting is that how little attention is paid to the feet but the feet are the number one thing on every endeavor, or any adventure, any sports that we do. The feet are the number one thing to touch the ground. Everything else is a distant second, a distant second. And if you ever been into a gym and seeing anybody doing footwork, just feet, no, no. We’re asking our feet to carry our bodies. We’re asking them to put shoes on it first off and then carry our bodies to walk, what she meant to walk on the ground, walking, all these different things. And then when you have to pick something up, we’re loading it even more and so we’re willing to do chest, and we’re willing to do arms and we’re willing to do everything but our feet actually the ones that are doing the work.

D: And the safety of every joint above it is depending on the feet being level and strong.

C: If you think of it as your house and let’s see, like in California, you had earthquake and the foundation was bulky. Well, you couldn’t just build on that house again, down that foundation until you fixed it. And so our whole thing is let’s start at the feet and let’s build a strong skeleton on the way up. Let’s get our feet strong first and then let’s stack on top of it correctly and when we stack, that’s when all the bones kind of the fall into their pockets and and if you see that correct spot and when all the ligaments are at their exact length. So now we’re living in a pain-free zone. When you’re strong there in that pain-free zone, we call that “Neutral.”, when you’re strong in neutral, you’re strong everywhere.

N: Well, we’d like to get a copy of your book, where can we go online and get a copy of Stacking – Your Skeletal Blueprint for Posture?

D: We are on Amazon and we’re also available on Kindle, eBooks and Barnes & Noble.

C: Everywhere, ebooks, everywhere that’s on the Internet. And we do our lecture workshops all over time. Right now, we just finished one at Torrance Memorial Hospital for the Dental Hygienists Association. And so we’re just now stepping outside of the box and looking at what’s the possibility for us.

N: Great. Well, I appreciate you coming in and speaking with me today both Debbie and Norman Compton discussing their recently released book, Stacking – Your Skeletal Blueprint for Posture and giving us some insight into their very unique approach to fitness. Thank you both for joining us today.