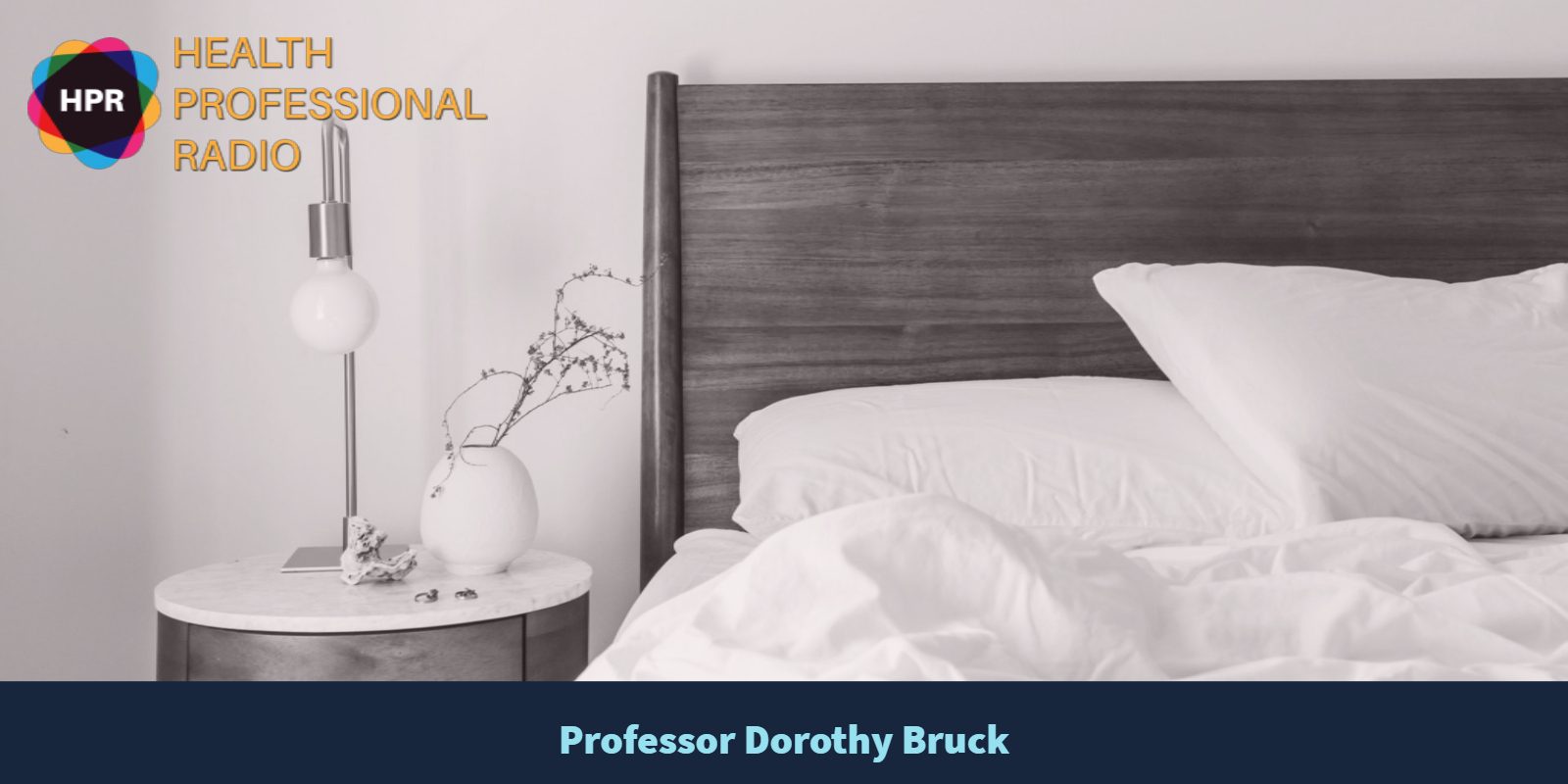 In this interview, Emeritus Professor Dorothy Bruck joins HPR to take about the work she does as the Chair of the Sleep Health Foundation. She also discusses about the prevalence of sleep disorders nowadays and shares very interesting medical facts about sleep.

Emeritus Professor Dorothy Bruck is the Chair of the Sleep Health Foundation and also works as a sleep psychologist. Her main area of research interest and expertise is sleep. She has been thinking about, and working with many aspects of sleep for nearly 40 years. Professor Bruck has had a long academic career at Victoria University with particular expertise in sleep/wake behaviour, mental health, chronic fatigue syndrome, waking thresholds and human behaviour in emergencies. She has an international research reputation with 80 peer-reviewed full-length publications, 1200 citations, over $2 million in competitive grant income and dozens of invited international and national professional speaking engagements. She has received numerous awards and prizes, including a highly prestigious US award. Professor Bruck’s research has been regularly featured in the media, including Time Magazine and New Scientist.

Tabetha Moreto: Hello everyone. Welcome to Health Professional Radio. I’m your host for today, Tabetha Moreto. Our guest today is Professor Dorothy Bruck, the chair of The Sleep Health Foundation. Today, she’s going to talk about her organization and the wonderful things that they do. Without further ado, welcome to the show, Dorothy. It’s very nice to have you here.

T: My pleasure. So Dorothy, please tell the audience more about yourself and the nature of your work.

D: Well, The Sleep Health Foundation is a non-government organization that was set up about 8 years ago to promote quality sleep in the community and to advocate for issues around sleep health. It sort of grew out of a professional association where experts and sleep physicians and so forth got together for conferences and so forth. We actually needed a more community focused arm. So we set up The Sleep Health Foundation and it’s been very successful since then. I’ve been there right from the beginning. I’m a sleep psychologist myself and an emeritus professor of psychology and the last year or two I’ve been chair of the foundation.

T: That sounds wonderful. What is your biggest current event? What’s going on nowadays with The Sleep Health Foundation?

D: Well, in August last year, we launched a very big and important report and that started our political advocacy campaign and like yesterday I just returned from Canberra. We’ve been to Canberra where our federal government seats about four or five times, well over the last 12 months really. And we’re trying to get the politicians to really start and engage in a national conversation about sleep health and the importance of sleep health for our community. One of the main reasons why we’re doing this is because our report from last year which was an
independent report conducted by Deloitte Access Economics looked at the economic cost of inadequate sleep in the community. Now, inadequate sleep is when people complain that most days of the week they feel like they haven’t really slept enough. We got the experts at Deloitte to look at the economic costing and they came up with a huge figure of $66.3 billion is the annual cost of inadequate sleep to the Australian economy. Now $27 billion is direct financial costs. So that’s a huge number in itself and then added to that is another $44 billion which is about, they calculated with disability adjusted life years. So it’s about well-being quality of life. If for example you’ve got a sleep disorder and that creates a lot of problems for you then that well-being is what they’ve calculated as you can’t contribute to society the way you would otherwise like to or could and that gets converted into a dollar number. So we have those big figures much bigger than a lot of other health conditions because sleep is so ubiquitous. And a large part of that is also absenteeism and presenteeism. So absenteeism from work, I think we all know what that is
but presenteeism is when you turn up to work but you’re really not firing on all cylinders. You’re really not completely focused on your work and what we’re looking at is people who turn up for work and they’ve had inadequate sleep perhaps over a number of nights. For whatever reason maybe a sleep disorder, maybe lifestyle, maybe their shift work roster, maybe their competing demands, maybe they have to hold down two jobs and look after children, all sorts of things that impinge on this … So we looked at those things and related that to productivity and that’s a big economic cost the loss of productivity due to absenteeism and presenteeism.

T: Wow. This sounds like a very serious issue and I can relate to that especially with my previous job where there are times where I’m at work but I’m really not there because I’m either sleepy or I can’t concentrate on my work. So I completely understand what you just explained a while ago.

T: So Dorothy, if you don’t mind, can I ask you a personal question?

T: Why are you so passionate about helping those with sleep conditions or sleep disorders?

D: Well, sleep has been a very important part of my career and my study career. Even when I was doing psychology at University, there were bits of psychology that I wasn’t really that interested in some of the rats and stats sort of things which especially in the 70s we’re quite prevalent in psychology courses. One day we had a lecturer professor come in and start talking about sleep and how you measured sleep and the different stages of sleep and I thought, “Wow. This is terrific.” This is not only related to the real world but there are ways that we can measure this and once you’ve got a way you can measure it, there’s all sorts of things that you can study about sleep. I was really attracted to the tangible nature of being able to investigate sleep. And also the fact that it has such consequences for individual people and also the fact that it was so multidisciplinary. There’s neurologists and neuroscientists and brain trauma people and doctors and nurses and physiotherapists and of course psychologists which is what I am, and dentists even now are all involved or can be all involved in thinking about how we can improve sleep and maximize sleep. I found that incredibly attractive and I digged depth in my honours year. I did a study on sleep. I then went to Germany on a scholarship and studied about sleep disorders over there. I came back, did my Ph.D. about narcolepsy which is a disorder of excessive daytime sleepiness and really my whole academic and research career has focused about sleep. That’s what excites me because I just think it’s so interesting and there’s so much we don’t know. There’s so many unknown things and yet it’s so important.

T: Yes. That’s true. I agree with you on that. Sleep is something that’s very important but unfortunately there’s a lot of things that we still don’t understand about it.

D: Exactly and one of the things that we don’t understand about it is exactly why we sleep. When you think about it being essentially almost unconscious for 8 hours a night from a survival point of view is not very clever when we were out on the Savannah and we were in our caves or whatever. Knocking ourselves out, being unresponsive to threats in the environment is a huge survival risk. All animals do it. So there must be a very good reason why physiologically our bodies need to sleep. Up to now that’s actually remained fairly elusive what that reason actually is. We talked about we needed to restore ourselves and to refresh and to get the boost and recharge our batteries and all that sort of thing and that does make a lot of sense. We go to bed tired and we wake up, ready to go hopefully. But what does that actually mean when you look at a system’s level in the body or what the organs are doing or what the souls are doing, what’s actually going on there. I went to a very interesting talk last year where somebody has done, a physiologist, a cellular physiologist and he said that he believes and he had a lot of evidence to back this up that every cell in our body needs to sleep. That’s a revolutionary idea that every single cell in our body needs to go to sleep and that if it doesn’t then there’s a whole lot of buildup toxins that mean things don’t work so well. I found that very exciting to hear that for talk. We think about what are the consequences of not sleeping and we know that some ruthless regimes around the world use sleep deprivation as a torture and it’s a very effective torture. If you think well every single cell of our body needs to sleep. You can understand why sleep deprivation even 24, 36 hours doesn’t even have to be a lot but some people just can’t cope with that, even that amount of sleep deprivation and of course none of us can cope with 3, 4 days of sleep deprivation. It just becomes impossible.

D: I think even vampires need sleep. They just sleep during the day.

T: Yes. That’s true. They need their coffins unlike us we sleep on our beds.

T: Dorothy, thank you so much. I would love to chat with you more but we’re running out of time. Before we go, what advice can you give our listeners regarding sleep disorders or sleep conditions?

D: Well, I think it’s important to prioritize sleep. If you’re worried about the quality of your sleep, I suggest going to some really excellent website. There’s our own Sleep Health Foundation website. We have over 70 fact sheets about insomnia or snoring or things if your body rhythms are not so right. So to inform yourself about what’s good or what’s normal and what might be going wrong to become a little bit of a problem solver. There are some excellent resources around on websites like the Sleep Health Foundation one and that can give you tips. Importantly, to let you know whether it’s an issue that you need to go to your doctor about like for example a heavy snoring that’s ongoing and if you’ve got a few and if your bed partner tells you that you’re stopping to breathing that definitely needs to be talked to discuss with your doctor because the consequences of having sleep apnea are very great for our cardiovascular system even for our functioning, even perhaps for the buildup of dementia. So these things need to be checked out by a sleep test. So it’s good to discuss it with your doctor if you’re concerned about your breathing and your snoring during sleep.

T: That was fantastic advice. Thank you so much, Dorothy for coming on the show. It was wonderful having you.

D: Thank you. It was my pleasure.

T: And that was Professor Dorothy Bruck from the Sleep Health Foundation. If you liked this interview transcripts and archives are available at www.hpr.fm. We’re on all social media platforms. So don’t forget to follow like and subscribe. Show us some love by subscribing to our HPR YouTube channel. We’re also available for download on SoundCloud and iTunes. I’m Tabetha Moreto and this is Health Professional Radio.