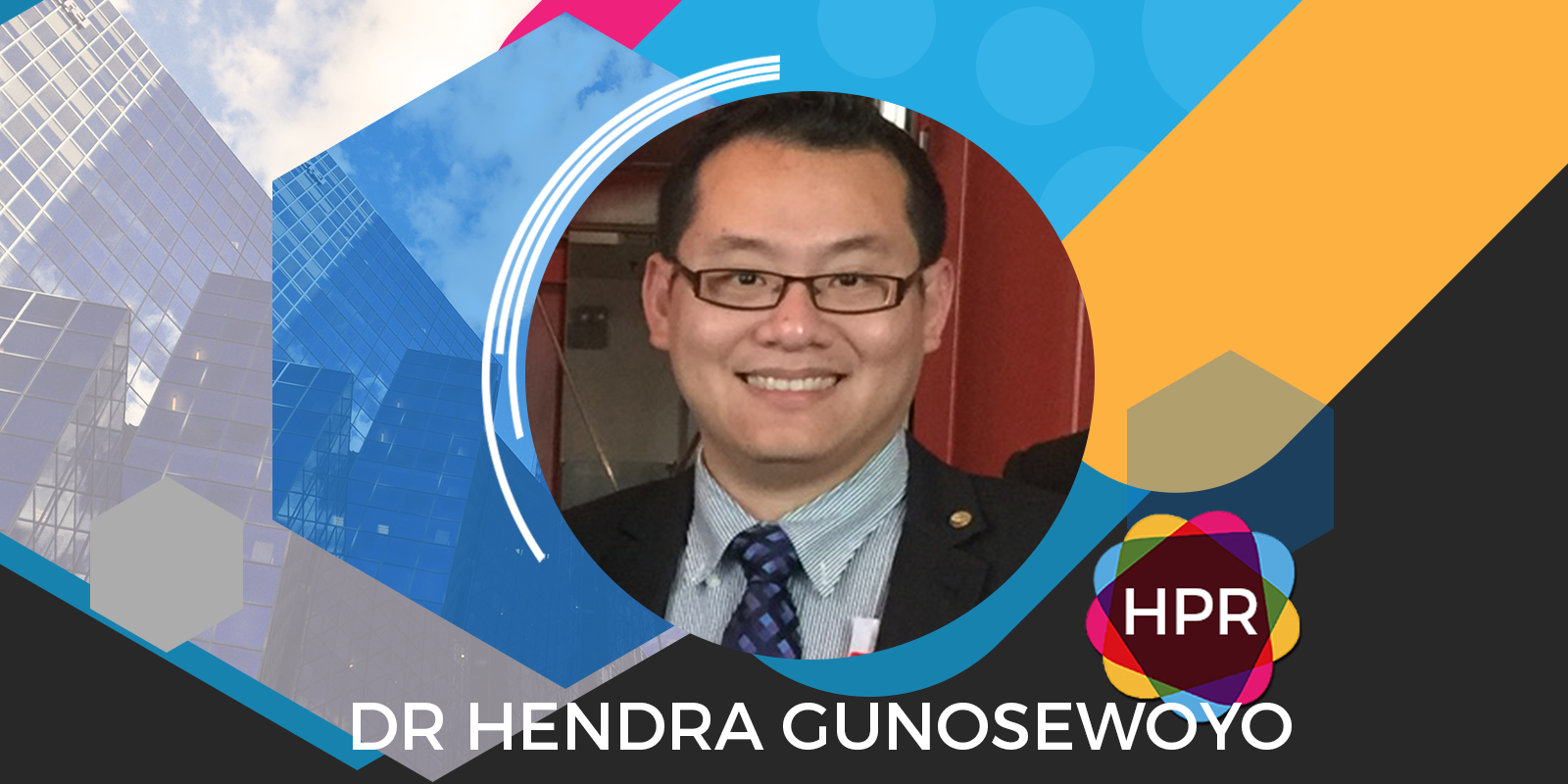 Guest Bio: Dr. Hendra Gunosewoyo is a Senior Lecturer and Australian Research Council (ARC) early career research fellow within the School of Pharmacy and Biomedical Sciences at Curtin University. Hendra is a medicinal chemist with research interests in the fields of infectious diseases and central nervous system agents. He received his PhD from the University of Sydney and had four years of postdoctoral experience in Chicago, USA. He is a Chartered Member of the Royal Australian Chemical Institute (RACI), currently focusing on better understanding of the cell wall biosynthesis in Mycobacterium tuberculosis(M.tb), the causative organism of tuberculosis.

Segment Overview: In this segment, Dr. Hendra Gunosewoyo joins the program to discuss about new treatments for tuberculosis as part of an ARC-funded research project. He also highlights the issue that despite the fact TB is a curable disease but it’s still one of the leading causes of death in the world.

Tabetha Moreto: Hello everyone, welcome to Health Professional Radio. I’m your host for today, Tabetha Moreto. Our guest today is Dr. Hendra Gunosewoyo, Senior Lecturer at the Australian Research Council. She’s also an Early Career Research Fellow within the School of Pharmacy and Biomedical Sciences at Curtin University. And to lead up to work Tuberculosis Day, we’re going to talk about new treatments for tuberculosis as part of an ARC funded research project. Without further ado, welcome to the show Hendra. It’s so nice to have you here.

Dr. Hendra Gunosewoyo: Thank you Tabetha for having me. Glad to be here.

T: Yes, my pleasure. So Hendra, please tell the audience more about yourself and the nature of your work.

G: Thanks Tabetha. So as you alluded before, I’m a Senior Lecturer in the School of Pharmacy and Biomedical of Sciences at Curtin University, that’s in Perth. At the moment, I’m also holding a Early Career Research Fellow position with the Australian Research Council. So I’m from Indonesia, I moved to Sydney in about 2000 to pursue my undergraduate and postgraduate degree. I have a PhD in the area of Medicinal Chemistry from the University of Sydney and I’ve then pursue my postdoctoral experience in Chicago, USA before joining Curtin in 2014. Being an academic at the moment, I’m both doing teaching and research at the same time. So while I’m teaching to our undergraduate and postgraduate students at Curtin’s chemistry base unit at all level and at the same I also do a basic research in the field of tuberculosis. So a bit more detail on that, our team is quite multinational and it comprises of us, the chemists, those who actually make compounds in the laboratory and our biologists team in the USA who then do the range of biological assays for the project.

T: That sounds very fascinating. As we know, tuberculosis is something that consider a treatable disease but why is it considered to be one of the world’s leading causes of death?

G: That is one question. So Tabetha first let’s go back, let’s go through to what do we know about the disease itself, tuberculosis. In about 1800, Robert Koch actually discovered that tuberculosis is caused by an organism called “Mycobacterium Tuberculosis.” And we do know at this stage that that are active versions of tuberculosis and that’s why people are actually the patients actually show the actual symptoms – coughing, the sputum in the lungs and chronic coughing as well as the latent version of the tuberculosis which means it’s just get going within your system. So the bacteria doesn’t really grow and the symptoms doesn’t really manifest itself. But three main things Tabetha that really sort of confounds our global controls tuberculosis are firstly on the global issues of the emergence of the multitrack as well as extensively tracking the systems form of tuberculosis. These are impart actually came from the lack of patient compliance which obviously leads to failure of treatments and that leads to an increase mutation for the bacteria itself and that in mind is the very ancient bacteria that has been in close contact with humans for a very long time. And lastly, in some endemic areas such as South Africa and India, TB actually coexist with HIV and so that actually brings about some degree of difficulty in really controlling these diseases having them at the same time. But to really answer your question, how do curable disease continue to be the number one killer, really the big problem is that resistance of the bacteria itself.

T: I see. So can you tell us about your research regarding new treatments for tuberculosis?

G: Absolutely. As I alluded before, so MTB or “Mycobacterium Tuberculosis,” it is a unique bacteria so we do know that I guess from the structures of the bacteria, it has a very special kind of cell wall. And we do know that the cell wall of the mycobacterium tuberculosis is quite unique and while we do actually know some part about the antimatic pathways that control the biosynthesis of the cell wall components, that is still a lot of components that we’re not sure as well. So what our research is actually trying to achieve is we’re going to do basic chemistry and biological sciences in order to actually better understand how the cell walls of these mycobacteria are actually synthesized. So as I alluded before, we’re doing basic sciences from the basic chemistry, what we do is we synthesize molecular probe that we can then use to actually investigate some mechanisms of for example essential components that are important for the cell wall in that state. By doing that, we’re ensuring that we could better understand the mechanism of our synthesis and thus we could design in the future treatments that could possibly be new treatments for this disease.

T: That’s good to hear. Hopefully in the future, there’ll be a new treatment for this disease.

T: So Hendra if you don’t mind, can I ask you a personal question?

T: Why are you so passionate about tuberculosis research?

G: As I alluded before Tabetha, I was born in Indonesia and the impact of TB especially that is actually quite a high concentration of the tuberculosis itself. In emerging countries like Brazil, some part of Russia, India, China and South Africa, these are really, really a serious issue. And so I guess coming from that when I was growing up, we did hear about the issue of the tuberculosis. And I guess, that sort of gives me a personal tryout to actually get moving forward, time to contribute to the research within this area and in that regards I’m very fortunate to have a fellowship that was coming generously from the Australian Research Council as well as the great collaborators that we have in the U.S., in China, in South Africa to actually pursue this project.

T: That’s wonderful to know that someone like you has a great desire in order to contribute to the fight against tuberculosis.

T: Doctor, I would love to talk to you more but we’re running out of time. But before we go, what is your main takeaway message to all of our listeners out there? What would you like to tell them?

G: I’d really like to say that tuberculosis, it is a curable disease but it has been haunting us for a long time. And in the wake of this, World Tuberculosis Day 2018, this has happened last Saturday, it is actually encouraging to see the United Nations incentive to actually stop TB or end TB by 2030. And even from the Indian government, we actually saw they’re very ambitious in saying that, “We’ll try to beat the deadline by 5 years.” It did just amazing to see this sort of compassion being put into this fighting this disease. And really, it is not one solution fits all, but we’re hoping at least from our side as a basic scientist, we’re hoping that our contribution from the research side can actually be helpful not only for the treatment of tuberculosis but also we have to aware that other mycobacteria are also implicated in other lung diseases such as COPD (Chronic Obstructive Pulmonary Disease) as well as systemic fibrosis. So the knowledge that we actually gain from our research could potentially leapfrog forward and to other kind of mycobacteria related diseases.

T: That was a fantastic message. And for those who want to get in touch with you, how they can do that?

G: I’m based at the Curtin University in the School of Pharmacy and Biological Sciences, those people who are in local we’re in Building 306 but otherwise, I can be reach via email or by phone as well.

T: That’s wonderful. Thank you so much Hendra for coming on the show, it was fantastic.

G: Thanks Tabetha for having me.

T: That was Dr. Hendra Gunusewoyo. We’ve just been talking about tuberculosis and new treatment for this condition. If your like this interview, transcripts and archives are available at www.hpr.fm. We’re on all social media platform so don’t forget to follow, like and subscribe. Show us some love by subscribing to our HPR YouTube channel. We’re also available for download at SoundCloud and iTunes. I’m Tabetha Moreto and you’re listening to Health Professional Radio.