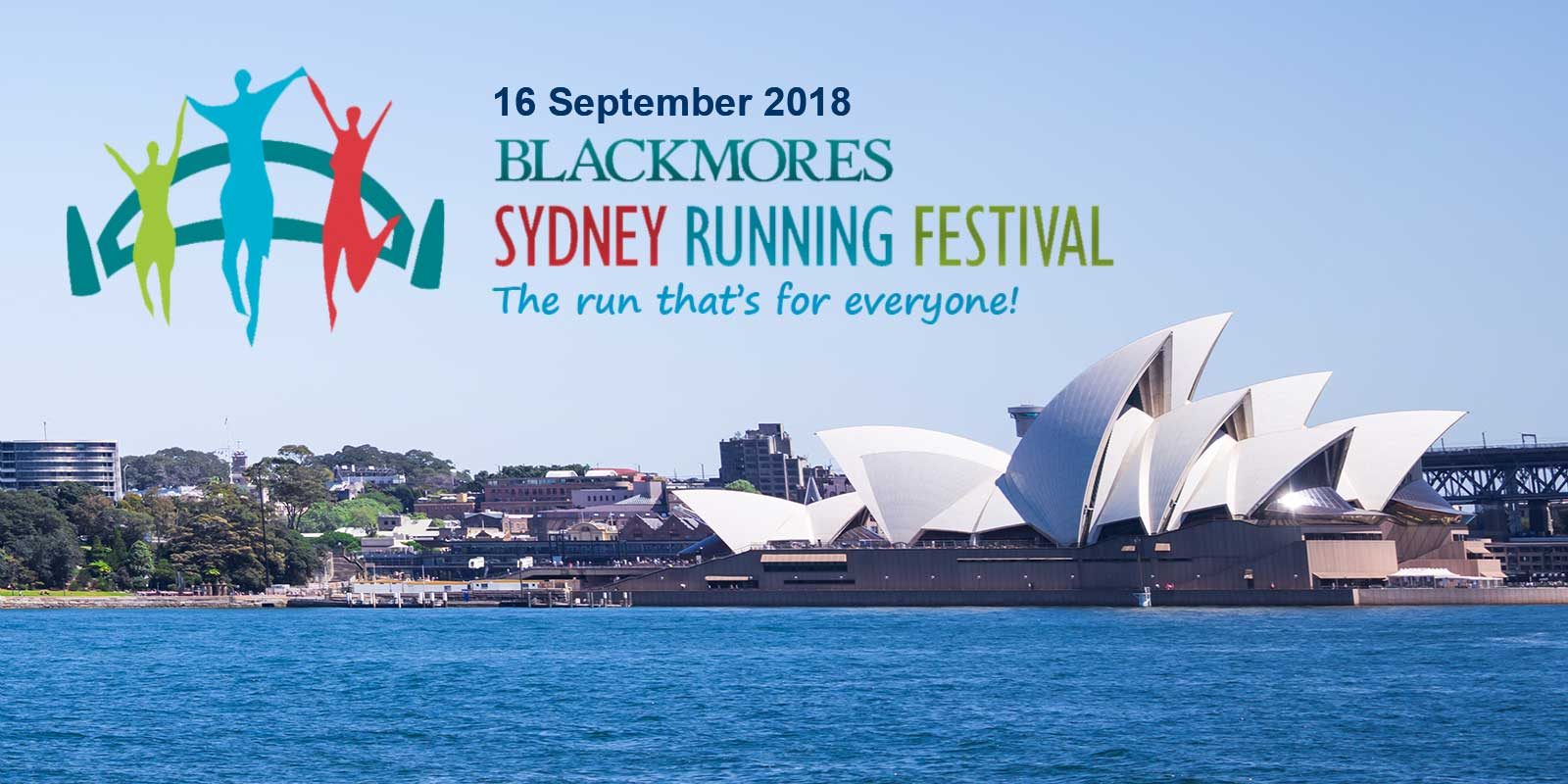 Richard Henfrey, Chief Executive Officer of Blackmores, talks about their support for the upcoming Sydney Running Festival, which will be held on September 16, 2018. For 15 years, Blackmores has been sponsoring this huge event to encourage people to move more and take control of their health.

There will be four running events to cover all ages and fitness levels – the Sydney Marathon (42.2 kilometers); Half Marathon (21 kilometres);  Bridge Run (10 kilometres); and the Family Fun Run (3.5 kilometres).

Richard also talks about Special Olympics and his passion to encourage people with intellectual disabilities to be involved in sports and make a huge difference in their lives.

Wayne Bucklar: You’re listening to Health Professional Radio. My name is Wayne Bucklar and today my guest is Richard Henfrey. Now Richard’s the Chief Executive Officer with Blackmores and Blackmores is a very well known brand but you may not know some of the things they do in the community space and we like to talk today about a new partnership that they’ve established and also a very old festival they they sponsor. Richard welcome to the show.

Richard Henfrey: Thank you Wayne. Thanks for having me on.

Wayne: Why was that an appealing group for you to get into partnership with?

Richard: Really, what we’ve done here is all about diversity and inclusion and Special Olympics is a body that really espouses involving athletes with intellectual disabilities in sport at all levels but in particular running some very significant global Olympics events annually, nationally and globally. And we’re doing this in conjunction with our sponsorship at the Blackmores Sydney Running Festival so we’ve been sponsoring the Running Festival for about 15 years and this year we really just thought we would we would shake it up by introducing this new partnership. Get everybody to think a little bit about their diversity and inclusion and particularly about people with intellectual disabilities.

Wayne: Now that festival for people who don’t know it,  this is the event that sees more than 30,000 runners and some walkers, walk between Sydney’s most iconic landmarks – across the world-famous Harbour Bridge – so this is a huge event and it’s surprising to me and also impressive that you’ve been involved in that for 15 years.

Richard: Yeah, we love supporting the event. It raises lots of money for charity but it’s also a great sort of showcase of Sydney. You’re absolutely right, they close the bridge for four events and so there’s something there for people of all abilities. There’s there obviously the Sydney marathon which is an internationally marathon, there’s a half marathon and a 10k run and a 3.5k sort of funrun/walking. You’ll see people of all ages and fitness levels getting involved and I think for our brand that’s exactly what we stand for. We’re all about encouraging people to move more and take control of their health.

Wayne: Now Blackmores are probably best known looking at the shelves in pharmacies and health food shops for a range of supplements and vitamins and I guess lifestyle health products. To hear that you’re so involved with people with intellectual disabilities, is that such a big group that it is attractive to you as a market?

Richard: I think it’s not so much about a market for us but when you look at sports people with intellectual disabilities, these guys have overcome some incredible hurdles to achieve what they’ve achieved. And I think as I said before, we’re really interested in encouraging Australians to get up, get moving, move more. And we all face little hurdles whether it’s getting out of bed at five o’clock in the morning, whether it’s eating the right things to be able to get the most out of your exercise regime and I think when we think about the small hurdles we face compared to some of the very significant hurdles that some of these athletes have overcome, it’s really it’s really humbling but I think it’s really motivating for all of us – that’s really why we want to shine the spotlight on it. But Wayne it’s about as I said at the beginning, it’s about diversity and inclusion and I think that that’s something that Blackmores has always felt really strongly about. I’m really encouraged actually that the debate on diversity in sort of society and in business has moved on sort of beyond just the number of women on board seats. We are talking much more about how we get a range of cultural diversity, gender diversity, ethnic diversity and particularly diversity of thinking into all walks of business and life and I think it’s a great trend in society but it’s something Blackmores has felt strongly about for a long time.

Wayne: You’re listening to Health Professional Radio. I’m today in conversation with Richard Henfrey, the Chief Executive Officer of Blackmores and Richard is talking to us from Sydney in Australia and we’re talking about the Special Olympics and the Running Festival and Blackmore‘s involvement in both those events. Richard, there’s a huge number of Australians living with intellectual disabilities, my cheat sheet here tells me it’s about 670,000. Often when people think about disabilities, they don’t think about intellectual disability. Do you think there’s a gap there in people’s education?

Richard: Yeah, I do. I mean clearly, as a society we have a lot more to do. Having sort of spoken about how encouraged I am about the diversity debate that’s going on in society at the moment, clearly, we have a huge amount more to do in terms of inclusion of people with all sorts of disabilities. But I think you’re right, we haven’t really shone a spotlight on intellectual disability and it’s very easy to overlook people who have incredible skills and things to offer society and that’s why we love Special Olympics so much is that they’ve found these incredibly talented people. And actually the Special Olympics isn’t just about elite sport, they’re all about encouraging sport amongst people with intellectual disabilities at all levels and they found they’ve really been able to include people in programs and made a huge difference to people’s lives. And as a company one of the things that we’ve really enjoyed, just today we had a meeting with all our team and a couple other special athletes spoke to our team and just to speak about the difference that Special Olympics has made to their lives and their ability to feel included and feel part of something. I actually think it’s a huge eye-opener for all of us.

Richard: That’s exactly right. So I think that’s exactly the message I’m trying to give at the moment, it’s about educating all of us to look beyond the surface and look at the skills and they and the contributions that people have to offer of all walks of life.

Wayne: Now you’re hosting some training days throughout August and these are going to be facilitated and led by Special Olympic Australia athletes.

Richard: Yes, this is something we do every year as part of the Sydney Running Festival. We have a few training sessions in Sydney in the lead-up and yes this year we have a couple of the special athletes hosting some of those sessions. So Chris Bunton who’s a gymnast is helping us with the dynamic stretching and I went to one of those sessions a couple of weeks ago and he runs he runs a mean stretching session, I can tell you. I certainly learned some stuff.

Richard: Yeah, to be able to get some fruit and a good massage and some advice again from some of the athletes about how to warm down from your strenuous program.

Wayne: With those sorts of numbers, you’ve got to have a lot of people coming through that Recovery Village.

Richard: Yeah look, we expect to get about 33,000 people across all the four events of the of the Running Festival. All the events close the bridge so everyone from those events gets the opportunity to go across the bridge and they all end up near the Opera House and the recovery village is in the botanic gardens. The weather is usually fantastic, it’s a really nice morning out and there’ll be all sorts of activities happening in the recovery village for people to enjoy and take part in.

Wayne: Now when people have recovered, Blackmores and Special Olympic athletes are hosting a dedicated award ceremony. Do you expect to recognize some people there for their own particular battles and the barriers they’ve overcome personally?

Richard: Yeah look, the awards that we typically do for the winners of the races, I do think the partnership is an opportunity for us to talk about diversity and inclusion and overcoming barriers generally at those. I don’t know that we have any specific awards for people who’ve specifically overcome disabilities to run but obviously, that’s a big theme for us of the day.

Wayne: It will without a doubt be a very joyful occasion and for those people who participate in one of the events, it’s going to be very memorable. Can you just run me through what those events are?

Wayne: And all of this is happening at the Blackmores Sydney Running Festival on the 16th of September?

Wayne: For people who want to register, I guess the website’s the place to go?

Richard: Yes, it is. It’s www.sydneyrunningfestival.com.au

Wayne: And if you’re reaching for your pencil to get that URL down quickly, we will have it on the website in the transcript of the show and we’ll also have it in the commentary if you’re reading it on social media but it was www.sydneyrunningfestival.com.au Richard, it’s been lovely having a chance to have a chat with you today and I do congratulate Blackmores on both their 15-year support of the Running Festival and this year on their support for the Special Olympics Australia group.

Richard: Thank You, Wayne. It’s our absolute pleasure to do it. It’s one of the highlights of our year and we just we just love supporting it.

Wayne: If you’ve just joined me on Health Professional Radio, then you’ve just missed a very interesting chat with Richard Henfrey the Chief Executive Officer of Blackmores and we’ve been talking about their recent announcement that in conjunction with Special Olympics Australia and the Blackmores Sydney Running Festival that they’re supporters of both of these events and they’re on the 16th of September in Sydney. But you haven’t missed all the conversation because on our website, we have a transcript where you can read the whole interview again. But if you’re not a reader and I guess given that you’re listening to us on radio that’s probably the case, so there is also a podcast available – an audio archive – it’s on SoundCloud, YouTube, and iTunes and you can download it and listen to it at your leisure. You can find links to all of those things on the station website at www.hpr.fm. My name is Wayne Bucklar and you’re listening to Health Professional Radio.