The Alarming Spread of Lyme Disease in The U.S. 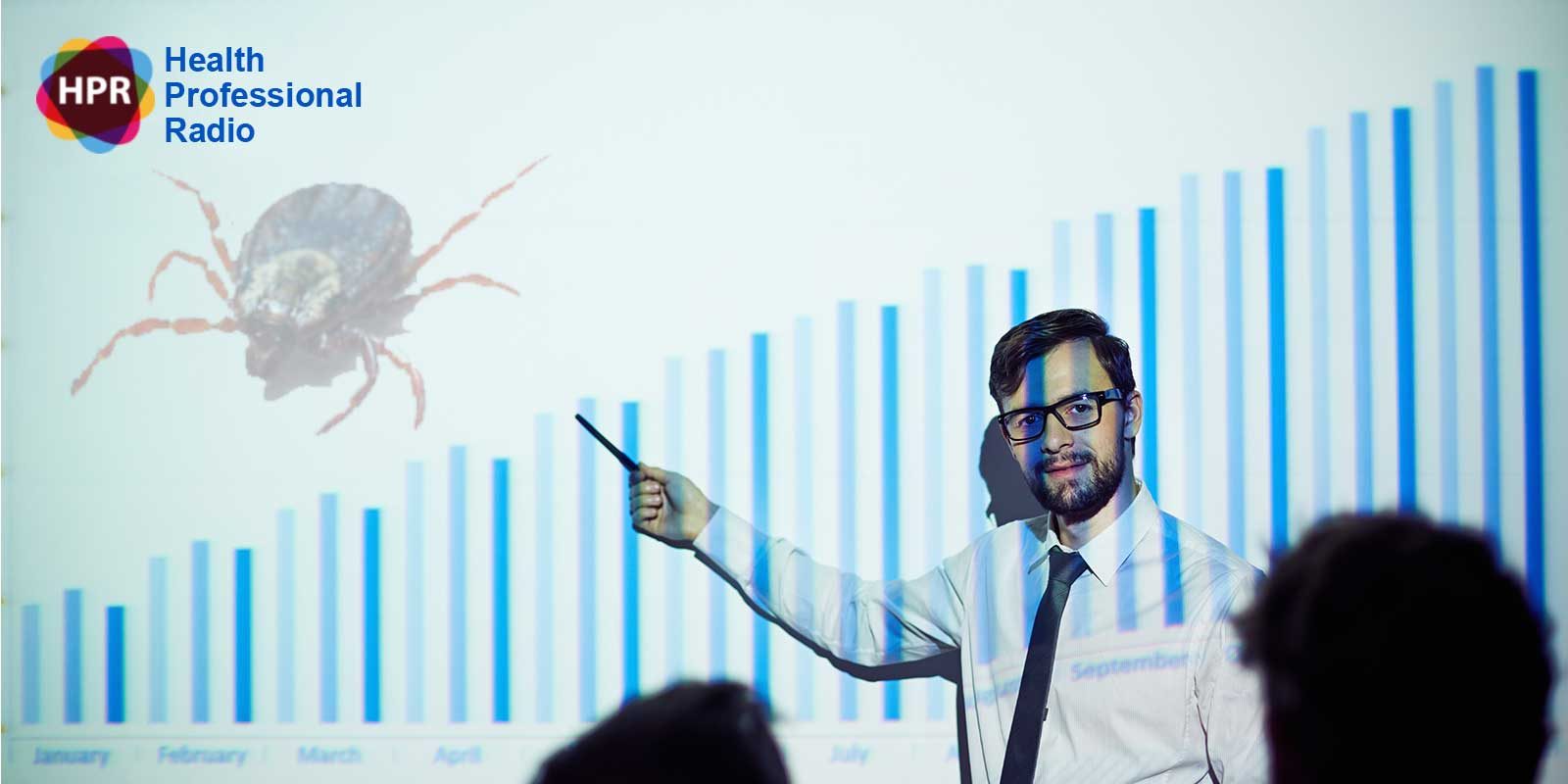 Dr. Harvey Kaufman, Senior Medical Director at Quest Diagnostics, talks about Quest’s use of data and analytics to power healthcare insights in the form of Health Trends reports. The latest report covers the alarming spread of Lyme in the US.

Harvey Kaufman is a Senior Medical Director, Medical Informatics at Quest Diagnostics. In that capacity Harvey leads the Information Ventures health informatics analyst team. He also leads Quest’s Health Trends efforts. Harvey joined the company in 1992 as Medical Director in Cambridge, Massachusetts. He was the first Chief Laboratory Officer for Quest Diagnostics, the first Six Sigma Quality leader and the first medical director of Hospital Services, Business Development, International and Clinical Trials, as well as Health and Wellness. Harvey has been involved with Quest Diagnostics Health Trends™ since its inception in 2005 and has provided medical support for many of our informatics activities. He earned a medical degree from the Boston University School of Medicine, a master’s degree in molecular biology from MIT and an MBA in marketing from NYU’s Stern School of Business.

Neal Howard: Welcome to the program. I’m your host Neal Howard here on Health Professional Radio, glad that you could join us. At this time of year, hiking, camping, gardening – those are just some of the most popular recreational pastimes among many outdoor activities but they can also pose a threat to the health of your patients and folks who are not necessarily that are undergoing a doctor’s care. New findings show that not only a spike in the prevalence of Lyme disease between 2016 and 2017 but also a rise in Lyme disease in areas that aren’t typically associated with this tick transfer disease. Joining us now to help understand who’s at risk as well as prevention and protection surrounding this problem is Dr. Harvey Kaufman. He’s Senior Medical Director for Quest Diagnostics and Head of the company’s Health Trends Research program. Welcome to the program Dr. Kaufman, how are you?

Neal: Great, I thank you for taking the time and I gave a little bit deeper into your background and let’s jump right into this discussion of this spike in Lyme disease here in the United States.

Dr. Kaufman: Sure, so let me first start with describing Lyme disease. It’s caused by an infection by a bacteria called Borrelia burgdorferi, the bacteria is carried by the black legged tick in the western states – it’s the Western black legged tick. The tick needs blood Neal to progress from one stage to the next stage in this development and if infected from a previous blood Neal, it can infect its next host whether it’s a cat, a dog, a deer or a person.

Neal: Is there any new research that’s revealing things that we didn’t know previously about this disease?

Dr. Kaufman: Yes. So we have thought about Lyme disease as primarily focused in the Northeast and we’re talking about the six New England states: Pennsylvania, New York, New Jersey, Maryland, Delaware, Virginia and Michigan and Wisconsin. That’s where the focus has traditionally been. There’s been reported cases here and there and in our study we were able to

demonstrate that there is Lyme disease everywhere and there’s been dramatic growth particularly in California, Florida and we saw a significant increases in states like Georgia, Arizona, Ohio, Texas and Tennessee.

Neal: Was this information gathered by just monitoring people coming into the doctor’s office or were there surveys put out? How exactly did quest to get the information needed to generate this Health Trends report?

Dr. Kaufman: Sure. Quest Diagnostics is the largest Clinical Laboratory provider in the United States and for this study, we have arguably the largest database of laboratory results with more than 44 billion test results. We pulled out more than 6 million Lyme disease test results from 2010 to 2017, that’s an eight-year period and these are results from patients who went to their doctors because of suspicion for Lyme. And for this study, we looked at patients who had what’s

referred to as IgG antibodies to the causative bacteria that were then confirmed with a second test called the Western blot and in this study we identified nearly 200,000 patients in the eight-year period and nearly 36,000 in 2017 and because of our national footprint, we can look at patients who test positive in all 50 states and District of Columbia.

Neal: Well obviously there have been some preventative measures communicated to the community throughout the years. Have those measures been overlooked? Is that one of the reasons that we’re having this spike in prevalence or are there new guidelines for the prevention of this disease?

Dr. Kaufman: The guidelines are the same in terms of prevention. What this report aims to do is to raise awareness from both the physician community and among patients that if one is suspected of having Lyme, to go to the doctor. If you have a rash, if you have symptoms that don’t resolve, go to the doctor because Lyme disease particularly in the early stage but even as it progresses is generally treatable with antibiotics.

Neal: Is it a long term treatment?

Dr. Kaufman: The antibiotics are short term but there are people who do progress. There’s no

clear division among the different stages. They’re referred to as local disseminated which means they’ve spread and persistent. If the disease is not treated quickly, it can disseminate and generally occurs about three to ten weeks after infection and about one in four people who do present with a disseminated Lyme disease which can affect the large joints particularly the knee, wrists, ankles and it can at some point in cause symptoms neurological and cardiac of the heart.

Neal: Well you mentioned that the guidelines for prevention haven’t changed even though this spike is a real thing. What are some of these tips that you can give us?

Dr. Kaufman: They are common sense so it covers much skin areas reasonable when outside or near wooded areas. If it’s not too goofy, tuck your pants into your socks. Use repellents that contain permethrin or DEET but always follow the instructions so don’t apply any of the eyes, the mouth, the nose, check the cans if they don’t apply to newborns, read the instructions. Walk in the middle of trails, stay away from the grassy areas if you can, when you do come inside, we should take a shower or a bath and then do the full-body look over. And when checking children, check behind the knees, between their legs, around the ears, beneath their arms, inspect clothes. Even with clothes in the dryer at high heat for an hour and that won’t kill the tick. And again, just use common sense.

Neal: Is Lyme disease transferred with the simple bite of a tick, the contact on the skin or does the tick need to burrow into the skin and lodge itself in order from Lyme to take hold?

Dr. Kaufman: The tick needs to grab on for a minimum of 36 hours but the stage that the tick

is at when we’re typically bitten is small and sometimes hard to see. So as they suck blood, they get bigger, it makes it easier to see. But again, it has to be on for at least 36 hours. If we do see a tick on us, there’s no need to rush and yank it out, think carefully. So the best approach is to find a pair of fine tip tweezers that’s clean, grasp the tick surface as possible, pull upward away from the skin in a single motion, don’t twist the tweezers as this can break off the mouth. And if we do see pieces of the mouth, try a second time to grab and if unsuccessful at that point just leave it alone and let the skin heal. Clean the bite area and the hands with alcohol or just open water and then don’t put the tick back down, put it on alcohol or a sealed bag, wrap it tightly in tape or just flush it down the toilet.

Neal: Now aside from Lyme disease, being the largest diagnostic analytics firm here in the United States, what are some of the other Health Trends reports that Quest has shared either

recently or in the past?

Dr. Kaufman: Yeah, we’ve done a fair number of reports looking at heart disease, diabetes, kidney disease, pediatric lead, some unusual ones like Q fever, rotavirus, hepatitis C, a number of different areas. They are all intended to provide insights into the public health, actionable insights that can improve healthcare outcomes so they’re exciting and they help spread the word to both the medical community and to us as patients.

Neal: Are any of these reports distributed throughout learning centers, universities and things of that nature for folks that are just getting into the medical profession?

Dr. Kaufman: Yes, so we do have a website where these reports are available and the Lyme disease reports available at www.questdiagnostics.com/home/physicians/health-trends/trends/Lyme-Disease-Health-Trends

Neal: You’ve been listening to Health Professional Radio, I’m your host Neal Howard. Transcripts and audio of this program are available at hpr.fm and healthprofessionalradio.com.au. You can also subscribe to the podcast on iTunes, listen in and download at SoundCloud and be sure and visit our Affiliate Page at hpr.fm