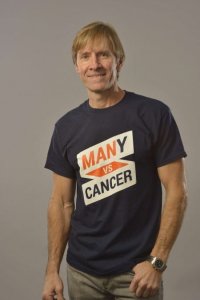 Guest: Stevie Dupin (aka Stevie D.)
Presenter: Neal Howard
Guest Bio: Stevie D. is a Kentucky-born comedian, writer and producer. A self-described hillbilly hell raiser, he grew up poor, in a dysfunctional but loving family, and left home after high school in search of fame and fortune. After spending years performing in top comedy clubs in Hollywood, he executive produced and starred in Rockstars of Comedy, a live concert DVD featuring some of the most recognizable comics in the industry, including Whitney Cummings of NBC’s Whitney and Steve Byrne, creator and star of TBS’ Sullivan & Son. Stevie is president of Blue Moon Media, which develops reality television series and other projects. He resides in Los Angeles with his wife and two children.

Segment overview: Stevie Dupin (aka Stevie D.), a renowned comedian, writer and producer talks about his prostate cancer diagnosis which became the subject of his humorous memoir, The Trans Am Diaries: A Hillbilly’s Road Trip from Stand-Up Comedy to Cancer… and Back Again.