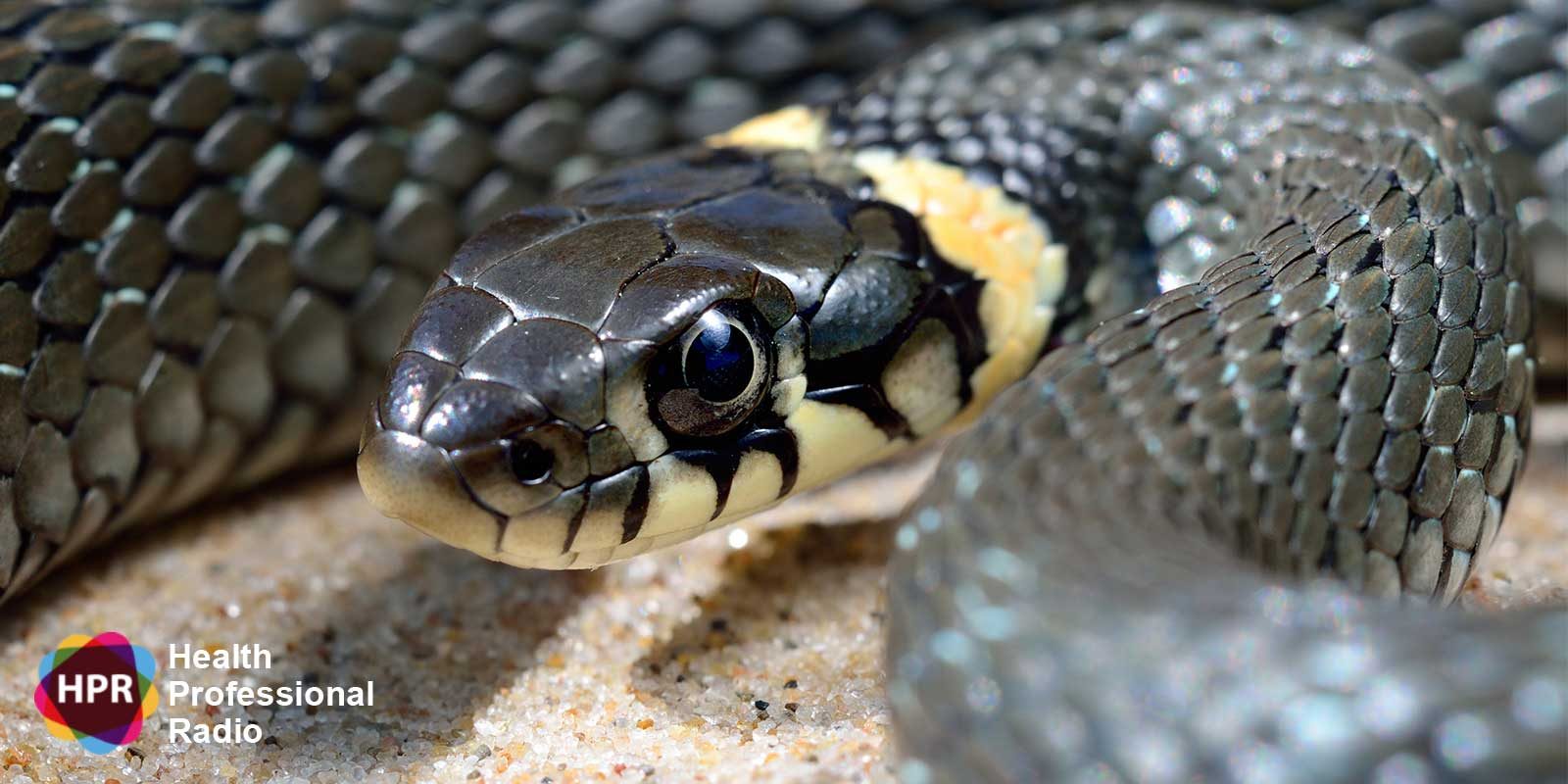 Dr. Charles Gerardo talks about snake bites and offers additional information that may both surprise and educate you about snakebite treatment and prevention.

Dr. Charles Gerardo: Thanks for having me.

Neal: Where do you practice snakebite prevention and treatment?

Dr. Gerardo: I practice in the Duke University Emergency Department.

Neal: Is snakebite prevention and treatment, is that something that is high on your priorities or is it just one thing that you’re familiar with and an expert in?

Dr. Gerardo: Well as you can imagine in emergency medicine we see quite a number of diseases but snakebite is a niche area for emergency medicine. So although it is not as common as say heart attacks or some other diseases as you could imagine, we have to be prepared for anything. So these less common injuries or illnesses, we need to be fully prepared for.

Neal: Now summer is winding down, we’re heading into fall. Does the change of the season diminish these snake bites in any way?

Dr. Gerardo: Yeah, absolutely. Snake bites are seasonal with the highest incidents in the summer but we definitely see snake bites into fall and particularly as the nights kind of cooled down but the days are still fairly warm, we’ll get a lot of snake bites at dusk when people go out to take the trash out or get in their car and walk out on the concrete or the asphalt and there may actually be a snake, they’re warming themselves.

Neal: When I think of a snake bite, I automatically go to that poisonous variety. The majority of them, I think, aren’t poisonous. Am I correct in that assumption?

Dr. Gerardo: The majority of snakes in the US are not venomous and usually bites from those kinds of snakes is simple to care for, simple wound care in dealing with the puncture wounds and addressing tetanus and making sure they don’t get infected and make sure the pain is adequately controlled. But the venomous snakes are a whole thing altogether, a whole nother thing altogether.

Dr. Gerardo: Yeah, all venomous snake bites where you have any symptoms are definitely emergencies.

Neal: Now is the rattlesnake, that’s the snake that most comes to mind when I’m thinking of a venomous bite, are there different varieties of these snake bites?

Dr. Gerardo: Yes, a rattlesnake is a type of snake we call a pit viper and in the US there’s more than just rattlesnakes when it comes to pit vipers. So we have rattlesnakes and a number of different species, we also have pygmy rattlesnakes and then we have a group of snakes that are comprised of cottonmouth and copperheads and where I practice, we see copperheads regularly. In fact that’s over 90 percent of our venomous snake bites.

Neal: Is there something that we do when we come upon a snake that is more likely to get us bitten as opposed to someone who’s more familiar with snake bite or it doesn’t matter? No matter how knowledgeable you are about a snake, you’re a candidate for a bite just by being in close proximity?

Dr. Gerardo: Well I think any time anyone, expert or not, comes upon a snake that the probably the best thing to do is to back away and get away and leave the animal alone. That’s true for venomous or actually for non-venomous snakes. Snakes are pretty fragile and it’s pretty easy to harm the animal so although they’re really interesting and people like to handle them and capture them, in general that’s not a great idea. And that’s of course true for a venomous snake because that’s going to increase the likelihood of you being bitten and a lot of people that are bitten by snakes were messing with the snakes. That being said, there are definitely plenty of accidental envenomations or we call them unprovoked envenomations, where someone was reaching into a woodpile or something like that, reaching under a debris pile and is bitten by a snake that’s hiding in there.

Neal: Now obviously getting treatment as quickly as possible is key. What type of a time frame are you looking at as you said you’re reaching into that woodpile and you’re at home and the hospital is eight or 10 miles away. Is it a good chance that you can get taken care of pretty readily or are you in deep trouble at the moment that you’re bitten?

Dr. Gerardo: Well the moment you’ve been bitten if you receive the venom, it’s a true envenomation and not a dry bite, the venom starts to do its thing so to speak but the presentations are really variable. So some patients immediately run into trouble and other patients have even a delay before you can tell that they’re going to have any symptoms from it so there’s a lot of variability but we do know that early treatment leads to better outcomes. So from a patient standpoint, the way to look at it is as follows: if you’re bitten, seek immediate medical care. In that way, you can maximize the likelihood of having a good outcome.

Neal: You mentioned that you see a lot of copperhead bites where you are but that snake bites in general aren’t way up on the list as far as people coming in to the ER to seek treatment. When it comes to being well versed in the treatment of snakebite, in your opinion how versed are ER staff in treating snake bites of these of different varieties?

Dr. Gerardo: That’s a great question. I think most providers and emergency departments are fully capable of handling the initial care so our suggestion is you present to your local emergency department. Emergency physicians are trained in this even if they don’t see it frequently. Once you receive the initial care, kind of the initial resuscitation so to speak, and receive the ideally initial medicine, the anti-venom if you have symptoms, then they can seek additional help from experts either at the poison center or transfer the patient to a facility like ours that treats quite a number of these.

Neal: Is recovery a long process once the initial treatment has been administered?

Dr. Gerardo: It can be, it’s of course quite variable. If you have a mild bite, you may be back to completely full function in a matter of weeks but there are certainly people that have snake bites that they never fully recover. In particular if they have a bite to the hand or the foot, that extremity may never be totally normal. Again, depending upon how much tissue loss or how severe it is. That being said, death is actually fairly rare in venomous snake bite and there’s around 10,000 snake bites in the United States a year when there’s only five to ten deaths and that’s primarily because we have good access and quick access to medical care and to the anti-venom that’s used to treat these so I don’t want patients or people to have to worry unnecessarily. If they seek care, they’re usually going to have a good outcome but the earlier the better to prevent any long-term disability the patient might have.

Neal: In wrapping up doctor clear up maybe a misconception about anti-venom. I’ve heard that in order to create an anti-venom, it has to be from the exact variety of snake that you were bitten by. Is that true or is that something that is just kind of a myth?

Dr. Gerardo: Well there is some species specificity but there’s a lot of cross reactivity and by that, I mean it doesn’t have to be the exact species that you were bitten by but it has to be a similar class of snakes. So for the currently available antivenom in the United States, it’s made from the venom of four different species but it works for all North American pit vipers which is the rattlesnakes, the cottonmouth and the copperheads.

Neal: Well we’d like to learn some more online about snake prevention and treatment. Where can we go online and get some more information?

Dr. Gerardo:  I think if someone’s bitten by a snake or if they’re interested in the treatment there is an app available, it’s called a SnakeBite911 or you can go to the web and look up any of the FDA approved antivenoms and the currently available antivenom is CroFab is the trade name.

Neal: Well I appreciate you coming in and speaking with us this morning.

Dr. Gerardo: Thanks so much for your time Neal.

Neal : You’ve been listening the Health Professional Radio, I’m your host Neal Howard. Transcripts and audio of this program are available at hpr.fm and healthprofessionalradio.com.au. You can subscribe to this podcast on iTunes, listen in and download at SoundCloud and be sure and visit our Affiliate Page when you visit us at hpr.fm