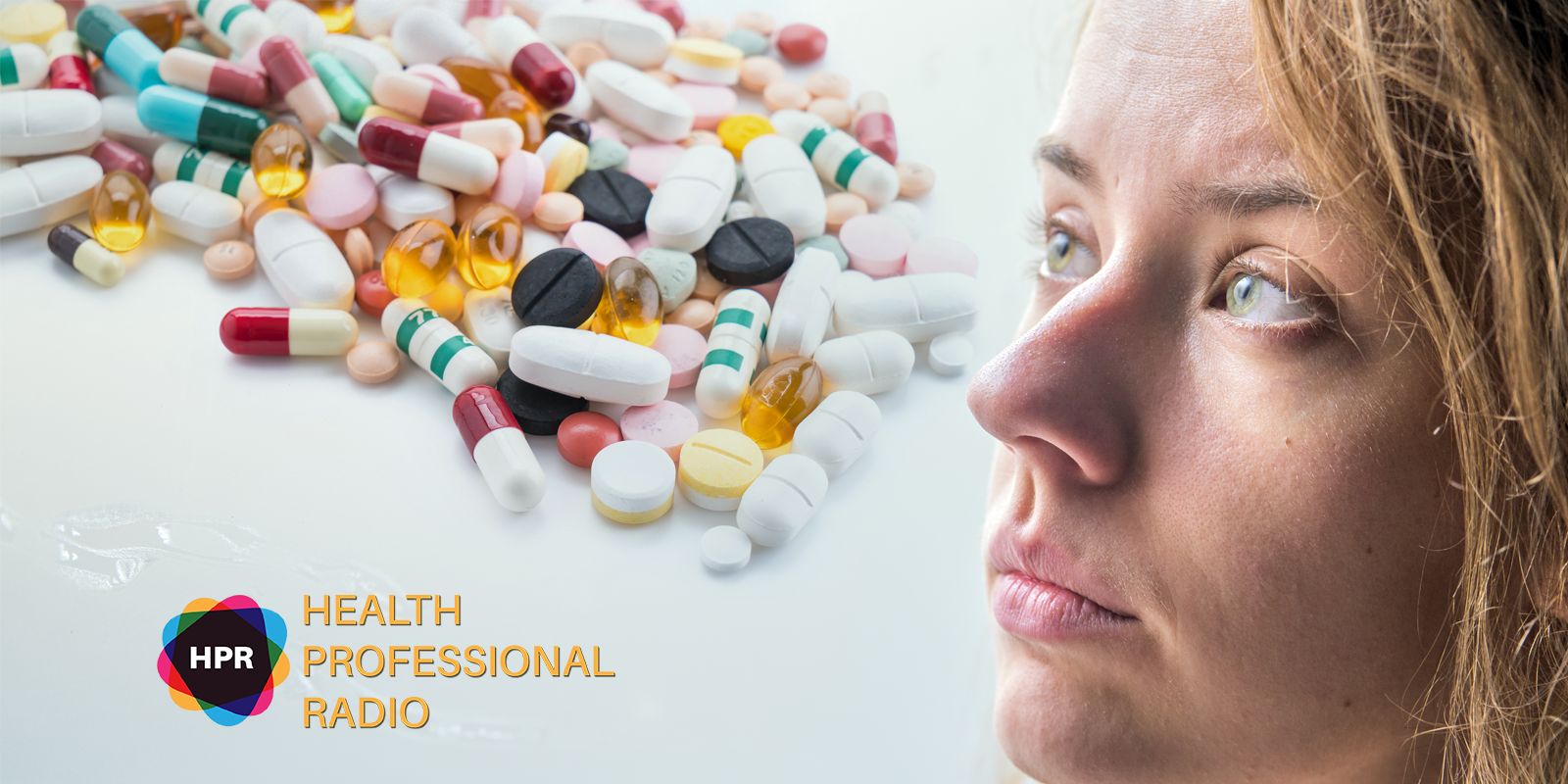 John Hamilton, chief clinical outreach officer at Mountainside Addiction Treatment Center, discusses how benzodiazepines have not only played a dangerous role in the opioid epidemic but have actually started an epidemic of their own. Find out more on www.mountainside.com

John Hamilton is a Licensed Marriage and Family Therapist and a Licensed Alcohol and Drug Counselor. As Chief Clinical Outreach Officer for Mountainside Treatment Center, he communicates the depth and intricacies of Mountainside’s portfolio of programs and offerings, which have redefined addiction treatment for thousands of individuals across the country. John has been a consultant for the National Institute for Drug Abuse (NIDA) and the Substance Abuse and Mental Health Service Administration (SAMHSA).

Neal Howard: Hello and welcome to Health Professional Radio. I’m your host, Neal Howard. Glad that you could join us here today. Our guest is Mr. John Hamilton, Chief Clinical Outreach Officer at Mountainside Addiction Treatment Center and he’s joining us on the program to talk about benzodiazepines and how they’ve not only played a dangerous role in the opioid epidemic but have actually started an epidemic of their own. Welcome to Health Professional Radio, John. How are you?

John Hamilton: Great. It’s great to be here. And thank you for giving me the time because I’ve got great concerns about the overshadowing because of the tragedies of the opioid epidemic of the next epidemic that people probably are not even aware of which is the benzodiazepine epidemic.

N: Benzodiazepines. For our listeners who may not be familiar with that term, what are those drugs?

J: It’s a new generation of barbiturates. It’s used for anxiety, insomnia, and seizure back in 1977. The most often prescribed medication that was probably most familiar with people would have been Valium Diazepam but since then actually, Ativan and Klonopin are much more popular and Xanax as well. So it’s a class of medications that’s been used for anxiety. The trouble is even the anxiety specialists will say that it’s used as short-term and the FDA recommends short-term use but unfortunately some people stay on for years and can really get in trouble with it. Even though for the most part it’s a pretty harmless medication when taken as prescribed by a doctor when mixed with opiates or alcohol can be fatal.

N: It’s used for several different things. Do you think that is part of the reason that it is overprescribed or misused?

J: Yes. It’s actually very effective and people like the medication. Particularly if some people feel overwhelmed by panic attacks and anxiety, it really short-term alleviates that pain. Some people use it like a p.r.n. as needed when they fly, if they have a fear of flying and in short term can be very very effective. The trouble is because it’s something that people become so comfortable with, they end up taking it long term and then the irony is one of the actual withdrawal effects, withdrawing symptoms is anxiety and panic attacks. So what ends up becoming something that a person was fearful of and went to the doctor, to begin with, ends up becoming a challenge to come off. So I mean, ultimately, people would need to develop skills over pills and being able to learn how to self regulate mood, regulate your emotions and just kind of stay present and mindful and that can actually be achieved through cognitive behavioral therapy which anxiety disorder experts now see as the golden standard for treatment, not medication. Medication is short term but not a long-term solution. And as I said, if you look at the overdoses in 2016 across the country for opiate overdoses, close to 30% of the overdoses around the country you can find traces of benzodiazepines in the system. Now, that we have prescription drug monitoring in each state we looked at the results of the prescribed controlled drugs in Connecticut for instance and for the five drugs were benzodiazepines. It was Xanax. It was Klonopin. It was Ativan and Ambien and only the Oxycontin made to the top five of the medications as an Opioid Analgesics. The other four were Benzos. So again, it keeps getting overshadowed by the Benzos but it has a significant contribution to some of these overdoses and on college campuses and in high schools. Now, kids are seeing it and perceiving it is a low risk. Obviously, it’s FDA-approved and sometimes they receive it from their doctors for anxiety and now there’s such a focus on Opioid Analgesics and staying away from that. The kids are seeing this as pretty harmless yet when they mix it with alcohol, it can be tragic. And then trying to come off these Benzos on their own without a medical value, a medical detox can be life-threatening. People can have seizures like three days going “cold turkey” as they would say from Benzos. So the key is to have a medical monitoring for detox and in our detox for instance at Mountainside, we have a five-day protocol for alcohol. It should come off of alcohol dependence 5 days for opiate dependence but a 10-day protocol for benzodiazepines because it’s so difficult to actually come off.

N: Do many people or most people who are addicted to opioids, are they also addicted to these benzos?

J: Well, it’s interesting because the jury is still out. Some of the individuals for instance in Methadone Programs across the country, there’s about 20% of people that are presently on Methadone Programs that are also using benzodiazepines, but the jury’s still out on whether or not those individuals are just not comfortable in their own skin, and even though they’re having their opiate addiction treated with medication-assisted treatment, that they may still be self-medicating or medicate an anxiety, pre-existing or co-occurring anxiety disorder. So there’s a cohort of individuals that do need to receive treatment for anxiety but then there’s another cohort of individuals that will use the benzos to get high because it has a synergy, a synergistic effect both with alcohol and opiates to actually kind of induce a high where there’s that cohort as I say that may still be drug seeking for an actual high experience but then there are other cohorts that are actually using it just to become comfortable in their own skin.

N: As we’ve been talking about hearing so much about this opioid epidemic, I’m hearing rumors of states beginning to sue individual companies, distributors of pharmaceuticals of opioids across the country. Do you see that trend on the horizon when it comes to these benzos? Because at some point we’re going to have to see some information saying that these are just as bad as the opioids that are being so vilified right now?

J: It’s a great point. Actually, I think there have been some cases already. There was one that I’m familiar with. In Connecticut, where a patient sued her doctor for becoming dependent on these benzodiazepines because it was so difficult to come off. So I do think that could be the next level of litigation before doctors that may not have responsibly prescribed this medication for their patients. Particularly, if their patient suffers from other substance use disorders such as alcohol substance use disorder where if they’re getting prescribed on an ongoing basis benzodiazepine they could die. It becomes something that puts them in harm’s way and there are physicians out there that unfortunately need to be better educated to understand some of the dangers in overprescribing this medication or even just to recognize that prescribing this medication long term is not the standard of care that existed in the country today for anxiety.

N: As a healthcare professional involved in addiction and treatment, what do you see on the horizon when it comes to educating folks such as yourself and other healthcare practitioners when it comes to opioids? Obviously, they’ve had a certain phase throughout the decades for use and prescriptions but now that this opioid epidemic has taken place, there are programs in place such as Casper in some states that regulate the distribution of these drugs. What do you see on the horizon as education when it comes to preparing counselors for addiction? Just getting rid of opioids all together and stop basically talking about them as an alternative or an option for their relief.

J: Yes. I know they were looking at some SAS packing, some clinical trials to look at non-opiate pain management and they actually have some that exists now. So I mean, we first have to do no harm and hold harmless those that are suffering from chronic pain and I think the whole field of pain management needs to partner with the field of addiction to make sure that those who truly need this medication will not suffer and reduce that access. There’s also the issue of great efforts as you mentioned about and through the states of controlling the number of opiates that people leave a hospital with, like there’s some research that suggests that if you have a 30-day supply of opioid analgesics leaving the hospital, you have a 40% chance of still taking those analgesics 12 months later. So to actually reduce the amount of increased exposure to the medication will increase the risk of addiction and that’s a key piece but that is actually an issue around supply but the reality is there’s still a demand there. So there may be a cohort of individuals that inadvertently because we put restrictions on these opioid analgesics will turn to the streets for heroin once they are dependent on these opiates. So we just have to be really careful that we need a multi-faceted approach to not just address regulations around supply but regulations around access for treatment and timely access to give people treatment in to work on challenging some of the stigmas around treatment and discrimination around treatment to have people be able to get that the help that they need. Because today, only 15% of Americans that would qualify for opioid treatment are actually seeking treatment in the last 12 months. So we can do a better job of engagement and I think we have to look at that on all levels and see addiction as a chronic disease like any other chronic disease that could be treated in a hospital treating, in any setting obviously, diverting it from the criminal justice system when it’s a non-violent offense and trying to get people treatment instead of incarceration. There are many different efforts we could make towards making some progress with this but I do think that, yes, there’s going to be new mechanisms that will be less addicting and where people will be less dependent on them but I don’t see it coming out anytime soon.

N: Well, give us a website where we can learn some more about Mountainside Addiction Treatment Center.

J: Yes. Well, we have mountainside.com. Just look it up and we offer a continuum of care for residential, for detox, for outpatient services, for medication-assisted treatment and recovery coaching. We see addiction as a chronic disease. So we can offer people extended care and support up to a year for that first vital year of recovery because that’s when people are at greatest risk for relapses in that first year. So we can offer that ongoing support when appropriate.

N: Thank you, John, for coming in and taking the time with us today.

J: It’s my pleasure. Keep up the good work.